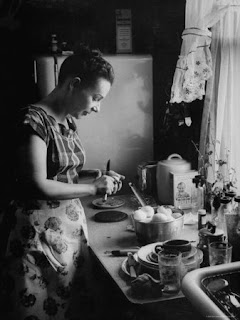 As I write this today, the storm-blizzard called Nemo (?!!) has left behind plenty of snow in some parts of the East and continues to snow and blow elsewhere.  My daughter posted a picture of the snow on their deck higher than Anna!

She and I were e-mailing back and forth since Thursday as she was making preparations for her family to hunker down.  Fortunately... or unfortunately... New England has been through numerous big storms the past few years so she has learned from experience how to prepare.

Being who Stephanie is and all, this meant not only the usual emergency preparedness but banana muffins and prebaked food (leek, bacon and brie quiches), and perhaps the most important of all... carafes of hot coffee and hot water.

Her preparations and my own cooking this past week reminded me of the importance of experience in anything we do.  I can scan the refrigerator shelves and know how to put together a meal using leftovers because I have done so for over thirty years of marriage.

Once in awhile, I will try a new combination and choke it down as it didn't work at all.  Then there are the serendipitous combinations when hubby will tell me to remember what I did to make that delicious meal!

I had this marriage of experience and learning something new happen recently.  I learned to use a chef's knife in cooking classes decades ago.  Hubby still looks in wonder as I can quickly chop an onion... not because I'm special but I have done this at least a few times a week for a very, very long time.

However,  I was watching a chef talking about thinly slicing onions to prepare them to be caramelized.  He showed how they teach students at his culinary school to hold the chef's knife tightly AT THE BASE OF THE BLADE with their thumb and forefinger to be able to cut an onion into very thin slices.  It works!

What am I saying?  As part of our Pantry Lifestyle, we must constantly be building a base of experience as well as realizing there is much still to learn.   If we think we are prepared only because we have made purchases... we are not prepared.

Those who went before us before the age of the Internet and cell phones (or TV for that matter), would have thought we were insane if we purchased what the farmer had raised and then stored it away... not touching it unless there is an emergency.

No... up until recently humanity lived a Pantry Lifestyle where they grew food in season and knew how to prepare what they (and their neighbors) grew in season... and how to preserve it for the long winter.  But what they preserved is what they were used to eating.

One does not purchase items and then hope for the best.  One learns from everyday life and experience.  For instance, our state was one of many in the Midwest that took part in an Earthquake drill.  It is always held on the anniversary of the New Madrid earthquake which was 201 years ago.

Now, we are far enough north that the chances of major damage is quite small but first responders still took part... to practice "just in case".  They understand the importance of doing instead of just purchasing the necessary equipment to have on hand.

I've decided to do more DOING than BUYING this year.  Well, that is an easy decision since I don't have any extra money at the moment for stock up buying (and I know many of you are in the same circumstances).  But I am going to practice more and get through the learning curve now!

I'll share more later about the results of DOING instead of BUYING.

I would also love to hear from anyone who has gone through an emergency about what lessons were learned that will help others.

The first link is more an economic article than preparedness but it shows how inflation in Argentina has brought about a freeze in supermarket prices and the affects of the freeze.  The byproduct of the freeze is that now most people are stocking up at once in preparation for the freeze to lift and prices to increase dramatically.

Hubby was an engineer who saw what happens in corporations when "Just In Time" became the norm.  He reminds me that is what is going on when Wal Mart, Target, and the other big mega stores are out of an item on their shelves... something we now see quite often.

It could happen here should we experience sudden inflation (which is predicted by many economists if we keep printing money)... here.   I was a bride in the 1970s when price freezes went into affect in the United States.

As for the second link... I have pinned it to come back to read more thoroughly soon.  It is called 17 Plants You Grow from Kitchen Scraps.   The former homeschool mom in me can see all kinds of opportunities for learning and the frugal housewife loves the idea of growing new veggies from leftovers... here.

Picture:  Actress Mary Deegan in the kitchen
Posted by Brenda@CoffeeTeaBooks at 12:25 PM

Hi Brenda - I enjoyed this Saturday post. I've learned so much about be ready for the times to come from your pantry posts. I was sorting and tidying recently and came across some guidelines from your blog that I printed out and I realized there were some areas that I need to go over again!

looking fwd to hearing about doing vs buying!

I'll be following those links soon. I'm going to give your tip about slicing onions thinly to the test. I depended on watching PBS cooking shows to learn a few things. One of the best for teaching such things was the husband and wife team, Caprial and John. I owe them a lot on how to do stuff.

It's true isn't it? The shelves are empty much of the time. Our favorites are not stocked and then we find that they've gone out of business or are not distributing this far north. Ackkk. Okay. I'll get a grip. ☺

Yes I agree nothing is new. Preppers so to speak, have always been around only they id it to survive the hard winters or till the next crop hopefully came in. Then it was just what everyone did and no one thought differently. It was just plain common sense. Recycling is another. Who didn't recycle way back when? I think they did it even better than we do. Boy when I read Laura Ingalls Wilder's book Farmer Boy about her husbands growing up years on his families farm I realized I knew less now at 60+ than a boy of 10 knew then. By then he practically knew how to run the farm and how to keep himself alive from scratch! Thanks for the links. An eye opener. We need to keep our wits about us and keep our ears open and minds alert. Things might be a changing! Now is the time to learn and do not when it is needed instantly. I am looking forward to any information and ideas you can offer. Thank you for letting God be your guide. Sarah

This is a very true and important point to make, that the knowledge you have is as important as anything else (if not more) to your survival. And it is certainly something to try to pass on.

Somehow, you have brought to mind a memory of my mil telling me how after WWII in Hungary when there was very little food, her family of more than ten people only had stored apples to eat for a few months. She told me that every day she had to go and find the ones that were beginning to go bad so they would eat them first to make it last. It made a very big impression on me.