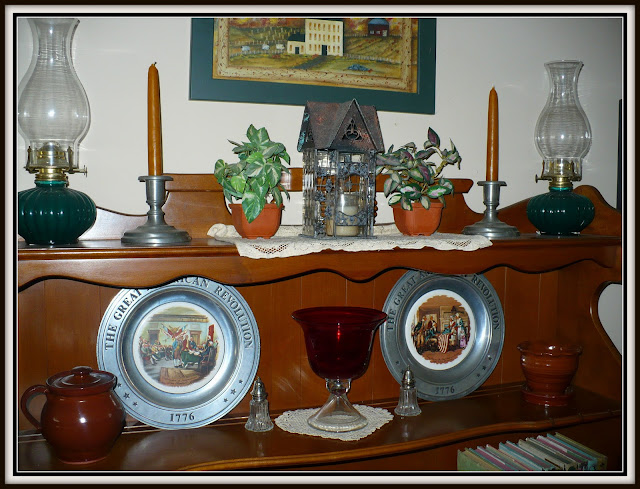 I had to text my friend this morning, telling her I'd be late meeting her for coffee as there was a thick frost on the van's windows, needing to be removed.  Cold temperatures and frost... brrrr.

By the time I left her house around noon-ish, the sun was shining and my down coat was quite uncomfortable.  Such is February... and March... and April... but at least we're getting closer to my beloved May (tied with October as my favorite month).

I will take advantage of the sunshine and warmth this afternoon as an arctic front is on the way, plunging us back into the icebox.

I thought I'd again show the changes I made to the hutch after Christmas.  The two American Revolution pewter plates were purchased for just a couple dollars each at the Mission thrift store.  They had about eight in the set but two were all I needed for the hutch.

The pottery on either side of the plates came from when Stephanie and family visited Old Sturbridge Village.   Usually this is the shelf where I display some of my brown transferware collection but I thought these were fun for something a little different.  I'll change it again when the weather gets warm.

I've been downsizing my teapot and teacup collection for a few years.  Yesterday, my daughter-in-law stopped by to borrow items for a Pride & Prejudice tea party she was hosting last night.

There was a table full of items to choose from and she went away with two teapots, four teacups and saucers, and some other fun items (with me reminding her to keep them!)  The more I downsize, I find myself mainly surrounded with those things which make my heart sing the most.

Speaking of Mrs. (and Mr.) Christopher, we have been invited for a Valentine's dinner at their place.  I have made Sheila's Cake to take for dessert.  (Named after my friend who gave me the recipe when we were neighbors, and actually called Chocolate Chip Apple Cake.)

A few slices went with me this morning when visiting my friend.

I took my insulin pen.

We decided since it is full of chopped apples, it is healthy for breakfast.   Some people can talk themselves into believing anything.
Posted by Brenda@CoffeeTeaBooks at 2:30 PM

Oh a Valentine's Supper out sounds wonderful. I've invited company for a Valentine's supper and am trying to think of ways to make it special and fun. I should peek over your daughter-in-law's shoulder.

Your eating cake for breakfast sounds perfectly reasonable to me...coffee cakes, pancakes, and waffles are perfectly acceptable...why not a cake loaded with apples. Perhaps I should look at those ingredients to see what else it is loaded with.

So warm here today that I went out in a sweater later this afternoon leaving the winter coat behind. I think the weather will swing back and forth like an old gate for a while now.

What happy life you lead Brenda! When the kids were young we had a tradition of eating cake for breakfast on each of their birthdays! Because I was a stickler for protein breakfasts (usually scrambled eggs) a sweet first thing in the morning was a rare treat. :)
Love,
Tracey xox
P.S. those Liberty plates were a find!

A Pride and Prejudice party sounds wonderful...perhaps your daughter-in-law could share some photos??!!

that cake is to die for! Linda