I wrote this just prior to coming down with the flu and hoped to extend the post a little.  However, even though I am feeling much better... my ponderer is not quite up to par.

This was an odd year for reading.  There were numerous events which kept me distracted, not the least of which was the wedding in May.  I tended to reread last year instead of starting many new books and mostly nonfiction at that.

Add to that, misplacing the notebook in which I write everything I've read in a year... I couldn't put together a list of favorites.  All I could do was think of a few books which instantly came to mind and then there was that Eureka moment!

I can list a favorite and at least one runner-up.  A sad list, indeed, as far as number but one can be assured these books were exceptional if they were remembered!  All four books were read for the first time last year, I didn't include any re-reads. 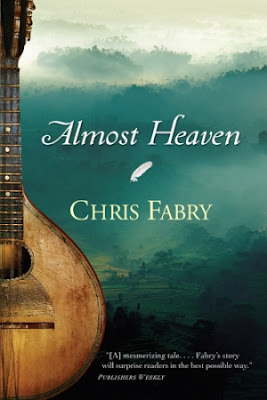 I thought I needed something light to read, a book to take me out of my own troubles, one to inspire laughter instead of tears (although this does have humorous moments)!  Not a book whose beginning brought about such sadness.

I tended to plow through those first couple of chapters, not because of bad writing... on the contrary, it was the great writing that kept me going... but it was rather depressing. However, I kept on and was rewarded with a story of warmth, forgiveness, redemption, and a reminder that it is the common man God most often uses in this world.

Almost Heaven is the story of Billy Allman, his trials and tribulations, his shortcomings, and the ghosts from his past which affects everything in his future.  But it is also the story of a man of persistent faith and forgiveness, how God takes the painful events in our life and redeems them for His glory.

Chris Fabry didn't take me out of my own problems with Almost Heaven.  Instead he inspired me that God is in control of my life... the good, the bad, and the ugly.  God not only can but will use every part of our journey to bring Him glory!

No wonder it was my favorite work of fiction last year and I highly recommend it.

Almost Heaven on Amazon can be found... here.

The Sister of the Angels by Elizabeth Goudge.

You already know I love A City of Bells and the fantasy sequel called Henrietta's House.  Well, when I found out there was a Christmas novella sequel called The Sister of the Angels, I couldn't wait to read it.

It's a lovely story in which most of my favorite people from A City of Bells are together for the Christmas season.  I love the way Goudge shares the challenges of those who are more artistic in the way they approach life, the need of redemption, and how we can all benefit from living life with the innocence of a child.

One can read The Sister of the Angels as a stand alone Christmas book with no problem, although I highly recommend A City of Bells!   Few books have stayed with me as that story has...

This book has been out of print for awhile but should be available through inter-library loan.  I found an inexpensive copy online but it took a lot of patient waiting! 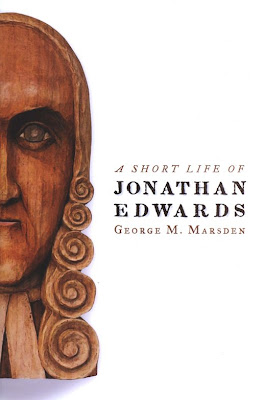 Really?  I know you've been "stalking Jonathan Edwards" for years but a biography of a man best known for preaching about Sinners in the Hands of an Angry God is your favorite nonfiction book?  Yes...

When I was perusing a couple more books to read about Rev. Edwards, I came across George Marsden's huge (and very official) biography called Jonathan Edwards: A Life.  While it looked interesting, it was far longer than I had time or inclination to read at the moment.

So I was very interested when I read a couple excellent reviews of this shorter biography written by Marsden.  It is not a condensed version of the original but a biography intended for a wider audience instead of theologians as the first.

I've written before how I became enamored with Edwards, his life and family, his influence on pre-Revolutionary America, and later his actual writings.   We need heroes who are followers of Christ while also being flawed men and women... just like us.

This book is delightful in the way it provides a background of American and European history at the time of his life and how the author compares the choices by Edwards to Benjamin Franklin.

It reads at times like a novel, much like my other favorite Edwards' biography called Marriage to a Difficult Man with the way it helped open my eyes and understanding of American life in the 18th century.  For instance, one understands what "separation of church and state" truly meant in the years when the states were often formed by various denominations.

I read this on the Kindle but plan on purchasing it in paperback for a reread this year.

A Short Life of Jonathan Edwards on Amazon can be found... here. 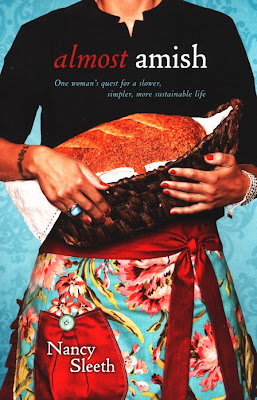 I thoroughly enjoyed Almost Amish (this is the nonfiction book, not the fiction story by the same name... which was good).  I must admit to having a similar way of thinking as the author before I read the book so I'm certain that had something to do with my enjoying it.

The title of the book came about when (at the end of a speech), a question was asked the author, "What are you, Amish or something?".  No, they are not Amish but a doctor's family who have chosen to simplify their lives in many ways.

In the book, the author writes about decisions the Amish made resulting in their lifestyle.  She is very honest about the "dark side" of Amish life (for instance, the results of legalism) but she doesn't dwell on it... for her purpose is not a history of the Amish but how we can learn from their good choices.

One doesn't have to go to the extremes of the Amish or the Sleeth family to live a simpler and much less materialistic existence.  However, there are many helpful suggestions for all of us.  I'd love to read this as part of a book club where discussion takes place!

In some ways, the philosophy of this book reminded me of Margin, by Richard Swenson... a book that had a significant impact in my journey from Yuppy to simplicity.

Almost Amish on Amazon can be found... here.


I've already started writing down books read this year so (hopefully) I can return to a Top Ten list next year.  :)
Posted by Brenda@CoffeeTeaBooks at 11:32 AM

Email ThisBlogThis!Share to TwitterShare to FacebookShare to Pinterest
Labels: Book and film recommendations

The Almost Amish sounds like a book I would enjoy.

I read Almost Amish this year too, based on your mention of it.

I liked it very much.

I also keep wanting to read Goudge and still have not gotten to it yet. When I do I am going to start with A City of Bells.

I too, like the story of imperfect people whom God can use since I fit into that category!

Brenda, you know I love to hear which books you recommend and I will consider reading these.

Oh interesting and intriguing choices. I remember your discussion of some of these books. I truly believe that I would enjoy all of them.

Before I scramble to add a few of your choices to my 2013 book list, I wanted to thank you for your reviews and send prayers your way for continued healing.

In His Grace,
Michelle

Good book list - I hadn't heard of any of these. I'm going to keep a better track of favorite books this year too.
Ann

I love Goudge but was not aware of this title. Thanks for putting it on my radar.