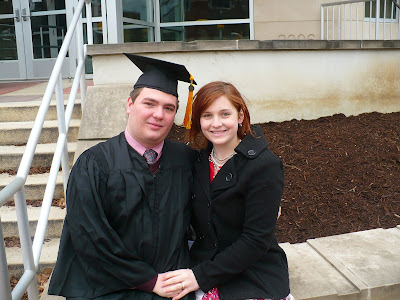 With great pride this weekend, we watched our younger child... our surprise baby... our ADHD wild child... graduate from college. 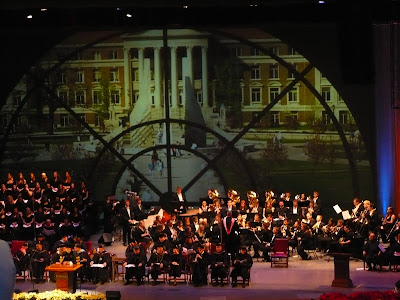 Even with it being the Winter graduation, there were thousands upon thousands of graduates.  We heard Christopher's name called but they were all moving so fast, all three of us (Mother, Father, and Wife) missed seeing his face flash on the screen!

But we were there and it was beautiful.  The president of the college talked about those who had achieved fame and honor, students who had sat in those very chairs at one time as they listened to the graduation speeches.

Among them famous scientists, engineers, astronauts, Novel Prize winners, best selling authors, Corporate CEO's, inventors, heads of government, and a few who had won the Super Bowl.  (At which time, my husband was really impressed...)

As I sat there this morning, I could not help but think of how my son had been labeled by the end of first grade as one who was slow, stupid, dyslexic, a trouble maker as he had trouble sitting still for long, and generally one who would not amount to much.

So we took him out of the public schools.

Homeschooling was far from easy and at times it was an adventure which made Frodo's seem tame!  But I have found that excellence is not easy and the journey itself was part of God's calling to our family.

What it provided was the time needed to teach and to learn and to allow the slow learner to blossom into the young man who graduated in the upper 10% of his class in a world class university.

When he left the community college, after taking the classes he would need to enter the University, he had to be diligent to get accepted in the School of Science.  Admission officers kept telling him he should go into Technology instead, he would still get to "play with computers" there.

It seems the School of Science had some bad experiences with homeschoolers and students from the community college.  But Christopher prevailed and if I remember correctly, went back so many times that he finally got past the lower level employees and got into see some "assistant this" and "associate that"... and was admitted on probation.

You see, he did not want to play with computers.  He wanted to be a scientist, to write the code, to design what others played with!  He had written the code to design his first computer game by the time he was twelve (or was it ten?).

He ended up being the only student they could remember who entered on probation and was asked to join their honors program in the same year.  What did his mother say?  "Tell them you were homeschooled!"  He also ended up helping to build a bridge between the community college and the university as a permanent committee has been formed.

Christopher became president of one of the student organizations, made lots of friendships that will last a lifetime, learned that being a leader meant apologizing as well as making hard decisions, and was in a field of study where the only way you survived through graduation was working as a team.

Homeschooling had allowed ADHD to become a gift instead of the sickness in which it was treated in school.  Just last year, his doctor at the university asked him if he wanted to go on a drug so he could concentrate better.

Christopher asked him if it would take away his ability to "think outside the box"... that very gift that helped him excel in computer science.  When his doctor said it would, my son turned it down.  A decision of which his doctor agreed.

I share all of this to encourage any mom who is still in the trenches.  They do grow up and turn into wonderful young men and women!  It is all accomplished one day at a time, one year at a time... but the results last into eternity.
Posted by Brenda@CoffeeTeaBooks at 4:00 AM

Equal Bravo to the graduate and his mother!!

Congratulations Christopher.
You must be so proud of him Brenda.This has been quite a year for him and your family.

Congratulations, to Christopher AND his parents. "Excellence is not easy..." Sounds like the title of a book you should write (in conjunction with your fine son)!

Oh Brenda, you must be so proud! Congratulations to all of you! This is a remarkable achievement and a great story. Good for Christopher (and you!).

This post ministered to me today. I found you at momheart.org

Perhaps I am an honorary (imaginary?) auntie at this point because I am so proud reading this that I could burst. What a bright light! Thank you for sharing this amazing journey and this wonderful day with us. Hearty congrats to Christopher and all his teachers!

Congratulations to Christopher and to you also for perseverance and determination and God's grace and help to both of you. This is a wonderful achievement and I'm thankful he already has a good job in his chosen field. God is good.
Blessings, Sharon D.

Congratulations to all of you! Passing this along to my homeschooling daughter and DIL! What an inspiration! Blessings . . .

Congratulations to all of you! Passing this along to my homeschooling daughter and DIL! What an inspiration! Blessings . . .

So delighted for you - God does not make mistakes and His hand has been on you and on your son through these years. Congratulation to him and thanks be to God.

Congratulations to Christopher and your entire family that stood beside him. He is a blessed young man to have such fine parents.

Your pride in you wonderful son is very apparent, and very justified! Congratulations to all!

Congratulations to Christopher! What a wonderful achievement!

It seems like just yesterday you were driving him to classes...!

Congratulations to you and your son! It is an encouragement to me, because I am most definitely "still in the trenches".

You are deservingly proud of Christopher and we are proud of you and your husband for raising such an exceptional man!!! Thank your for sharing his journey with us. I have many friends that homeschooled all their children and they too have excelled. All that hard work paid off. These children are also so much more well rounded in education it seems than the government schooled children are. I thank you for raising and schooling him...and teaching him to love the Lord. It is so wonderful that you have raised two extra special children. Sarah

That is so great! Congratulations!
Dee/NY

What a blessing! Thanks for sharing!!

What a wonderful accomplishment. You must be so proud and rightly so. This combined with Melissa's academic achievements and support is a sure sign that God has a plan for this special young couple as they start their life together.
Martha

What an excellent testimony to living God's plan and excelling to accomplish His calling as a family and as an individual.