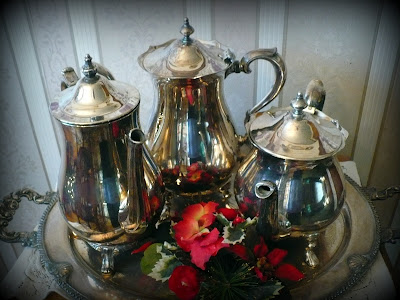 There is so much of the Christmas Story that is familiar...


"While they were there, the time came for the baby to be born,
and she gave birth to her firstborn, a son.
She wrapped him in cloths and placed him in a manger,
because there was no guest room available for them.
(Luke 2:6,7 NIV).

However, aside the birth of the Savior... my favorite section is a little later in the narrative when we meet two very special elders:

"Now there was a man in Jerusalem called Simeon, who was righteous and devout. He was waiting for the consolation of Israel, and the Holy Spirit was on him.  It had been revealed to him by the Holy Spirit that he would not die before he had seen the Lord’s Messiah (verses 25 and 26)..."

"There was also a prophet, Anna, the daughter of Penuel, of the tribe of Asher. She was very old; she had lived with her husband seven years after her marriage,  and then was a widow until she was eighty-four.

She never left the temple but worshiped night and day, fasting and praying.  Coming up to them at that very moment, she gave thanks to God and spoke about the child to all who were looking forward to the redemption of Jerusalem (verses 36-38)."

Imagine Simeon and Anna in their elderly years, awaiting the birth of the Messiah.  Many most had stopped looking for the Messiah.  Even those who best knew the Sacred Texts didn't recognize Him as the one whom they had expected through the centuries.

However, these two people (and I love that God included a man and a woman in the narrative) knew exactly who the baby was when He was brought to the temple that day.  What was different about them?  What special gifts did they hold fast that others more powerful had not received?

I honestly don't think they had any special gifting, other then a promise from God that they would see the Messiah in their lifetime.  Can you imagine being over eighty years old and still holding fast to... anticipation?

They believed in spite of waiting for a very long time, watching the bewildering events unfold around them.  For remember... Judea at that time was occupied territory...  taken over by the world's super power... renamed Palestine.

Think ummm.... Ben Hur, The Robe, and The Silver Chalice.   Not to mention the entire New Testament.

As I pondered these two faithful Jewish elders recently, I was thinking that they can teach us how to live today.  For they stayed close to their God and regardless of how many revolutions around the sun we have seen... our wisdom will never be enough without His Holy Spirit... our Comforter... our Friend.

For we live in a world full of bad news, a world of "wars and rumors of wars"... a world in desperate need of a Savior... where the faithful are waiting for His second coming.   These two precious souls remind us that God is faithful and one day... if we faint not... we will see His return (either here or from the Heavenly places).
Posted by Brenda@CoffeeTeaBooks at 6:00 AM

Excellent post, Brenda. Every morning I pray, "Thank-you, Lord, that we are a day closer to Your coming." We do not know the day nor the hour but we do know we are in the season.
Vicky

What a wonderful post. Joy filled my heart as I read it. This is also one of my favorite stories of the Bible....people realizing the fulfillment of the prophets! It makes me sad to see so many people squander the true meaning of this season. I've never seen a time in my life where He was more needed. Thank you for writing your heart.
Debbie

Since my children were small we have celebrated the four Sundays of Advent with the same Bible stories each year. The first Sunday, the theme is hope and our story - this one - about Anna and Simeon and their hope fulfilled. It is always my favourite too.

Brenda - Thank you so much for this lovely post! Taryn

A very good word... How interesting that we have these role models whom, a few years ago, we could not have fathomed being people who show us how to live today. You come up with the most unique things.

Lovely, encouraging words. I'm so grateful for the Holy Spirit. For grace and strength. Bless you, Brenda.

I needed that. I was really missing the old times with both my parents in their retirement home where I would visit with Ashley.....