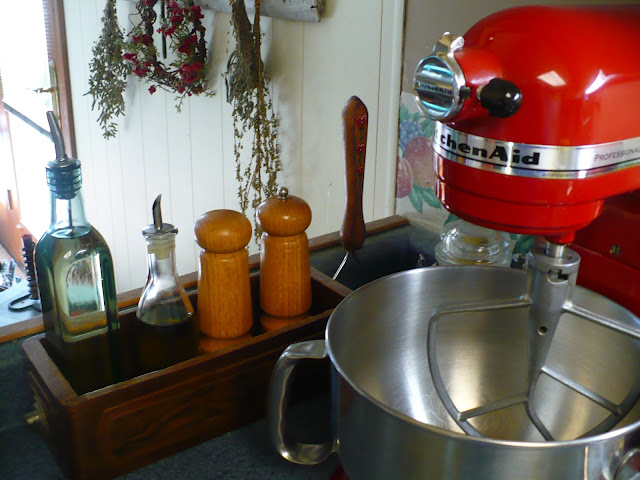 Okay, today I'm waxing poetic about a concern I have about stocking a bomb shelter instead of deepening the pantry.  My ponderings began because I've been asked if I ever watch TV shows like Doomsday Preppers and such.

I've only watched a couple episodes out of curiosity but I have concerns about anyone using them as a "how to" program.  It's just that the preppers I saw on those two episodes are doing exactly the kind of things so many did prior to Y2K... stocking up food and supplies in case there is a collapse of society with mostly foods made for an emergency situation.

I  watched part of an episode a few days ago in which a man talked about having large amounts of grain stocked..   The camera crew were with him as he purchased bags and bags of feed corn... yes, feed corn... like you feed to animals.  He said it is edible if you clean it very well and make cornbread from it.  (To his credit, he does own some cattle so the corn would not go to waste if the humans don't eat it.)

Okay, I understand feed corn is cheaper than say bags of popcorn.  However, if you purchase a similar size bag of popcorn and use it regularly, it is already cleaned and you can grind it for cornmeal and you can pop it for a healthy snack.   (Also, your digestive system is already used to eating corn that has been ground and baked, just as it takes awhile for us to get used to bread that has been baked from 100% ground whole wheat.)

It doesn't cost that much more than feed corn and having had to live off a deepened pantry I can tell you... the popcorn I had in a bucket was used and I absolutely know my family would not eat feed corn (especially if you had to clean it first).

You see, that kind of prepping... where one goes for quantity instead of quality and long storage life instead of taste... is all dependent on the belief that people will eat anything if they are starving.

Perhaps.  If there is absolutely nothing else to eat.  But when we went through a year of unemployment, my son still didn't eat the beans in the buckets (I gave them to a family who loved beans) and my husband refused to eat Spam (which Christopher and I like when sliced thinly and fried to a delicious crispness).  ;)

The thing is, what I took away from years writing about emergency preparedness (and Y2k) is this... there is a huge difference between a Pantry Lifestyle and preparing for Armageddon.   The Pantry Lifestyle is simply living the way our great grandparents did to whatever extent God leads.

Do I believe we're in for even more difficult times?  Yes, I do.  I still believe it is a very good idea to stock up with food and essentials to the extent you feel comfortable... given time, money, and space.

So for some it will simply be stocking some food and essentials in an apartment closet but those items are what the family eats and use already.   I've known others who believed God was leading them to the country so they can garden (like us) or to an actual farm where they learn to grow a crop, raise animals, etc.

If you know God is leading you to purchase freeze dried food and you have the money for it, then do it!  We can all use a good water filter, backup lighting, a way to cook if the power is out, etc.  I wish I had the money for a solar generator (but coveting is against the TEN, you know).  ;)

But just do the best you can with what you have, ask God for wisdom... and trust Him for the rest.... gain information and experience... and as the angels said, "Fear Not".

This week's link is to an article that contains lots of links and information.  It is called 120 Powerful Pieces of Advice for Preppers and it is... here.

The good thing about all of the preparedness links I send you to is you can pick and choose what information is valuable to your family.   Having said that... I may not always agree with everything people write so use discretion.  :)
Posted by Brenda@CoffeeTeaBooks at 12:40 PM

Yes, there is a distinct difference between getting by well and the end of time. If and when it gets that rough, I'll just opt for Home because I am not eating broccoli.

Love your posts and your sense of humor. Spam fries up crispy if sliced thinly enough? I must try that. I might like it.

There is a difference between being prepared for tough times as our grandparents and parents were and going radical as some preppers are. In reality even those who feel they are totally prepared can only last so long before they too will run out or need emergency medical care.
My hubby and I are preparing for problems and stocking up, but if it goes really bad..I just hope we are at ground zero. Much rather be HOME in my heavenly home for good than on this troubled earth anyway. Thanks you for sharing with us..and God bless! Marsha

I applaud everyone who prepares their pantry for hard times; even if a natural disaster hits, people with deep pantries will be glad they planned ahead. We aim to keep plenty of water on hand, they tell us we need two gallons of water per person per day.

I consider the preppers on the tv show to be extremists. I prepare, but a lot of the food I store is from the local grocery store, items that we eat every day. I have some wheat and beans, and I do use them for myself, but my husband won't eat them, so I store things he will eat. I am not sure I believe that we will eat anything when we are hungry. I think in emergencies, we tend to turn to familiar foods. My "deep pantry" helped us get through 21 months of unemployment, and a move to another state for a new job. My husband also had some severe health issues at that time, and ended up in the hospital for over a month, and during that time he didn't even qualify for unemployment benefits. I think we prepare for those kind of situations as much as or more than "the end of the world".

...just do the best you can with what you have, ask God for wisdom... and trust Him for the rest.... gain information and experience... and as the angels said, "Fear Not".

It is THIS philosophy, Brenda, that keeps me coming back :)

Hello, I'm new to your blog, really enjoying it. :) I am trying to learn about the pantry lifestyle, wanting to give it a go. Do you have advice on how to start when there is little to no extra money for such purposes? I was talking with my husband about it, but we both kind of joked (in honesty), how do we buy extra when sometimes it seems like we can't buy enough for the week? I decided last week that perhaps I could manage just buying 1-3 extra items per week beyond what I normall buy, perhaps oatmeal, peanut butter, pasta. I'm trying to be more efficient and careful, and trying to learn...however, I've got two little boys at home who seem to eat most of what I put in my pantry.

Besides my husband, they are my most very favorite blessings, and the Lord always provides. ;)

You should really avoid corn - it's genetically modified.

I've watched a few of the 2012 Doomsday prepper type shows. I saw one where a woman gives classes on prepping (I think it was food storage or something like that)and she had a packed class.

My husband is in retail-with retail any day could be your last so I always try to have a well stocked pantry & 1 month of necessary expenses in savings. We live in an area where ice storms and tornadoes are common so I try to be as ready as I can for those occurrences.

I just try to do the best I can with what I've got.

Wonderful points Brenda. One does need to use sense in preparing a pantry. Not let fear guide us. Clarice