Of Martyrs and Veterans... 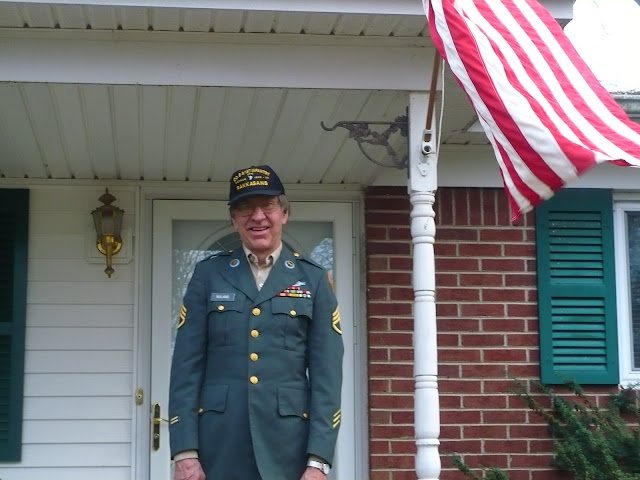 Do you like the new look of Coffee Tea Books & Me?  I spent Sunday afternoon doing some redecorating, repainting, and widening of the CTB&Me rooms.  It is (hopefully) more warm and cozy for the winter months and I can now make the pictures larger.

It has taken ages to get the the width just right but I brought the laptop into the Family Room, turned on a Finding Bigfoot marathon on TV (yes, Stephanie... no kidding), and spent a few hours off and on making changes.  :)

Sunday was not only Veteran's Day in the United States but worldwide it was The International Day of Prayer for the Persecuted Church*.  Both groups of people need to be on our daily prayer list.

Hubby (my favorite Vietnam era soldier) and I went to Applebee's for a late lunch.  His meal was free and I ordered an appetizer so it cost very little but was still fun.  He wore his dress uniform jacket and shirt, as well as the commemorative hat he was given in Washington, D.C.  I took the above picture when we arrived home.

The hostesses at the restaurant and I were teasing him about keeping his girlie figure, it is rare to still fit in your uniform at his age.  Actually, hubby was always tall and skinny and he could still fit in the slacks of his uniform until a few years ago when he put on a little more weight.  He thinks he is now fat, the rest of us know he's just more normal (at least his weight, hehehe).

Hubby is a little over seven years older than I am and the war was wrapping up the year I graduated from high school.  Once in awhile, we realize there IS an age difference... such as last week when the original Johnny Quest cartoon came on TV while I was cooking in the kitchen.

I left it on and listened to what they were saying (it is nostalgic for me), and I was so surprised when there was a scene in the cartoon with the two boys kneeling by their beds to say their prayers and later their father tells them all they can do is to "pray about a situation".  Now folks, I'm always saying how much society has changed... this was a kid's action cartoon and not on a Christian station.

Sooo... I mentioned it to my husband and he said he'd never heard of the cartoon.  What?  It was only one of the most popular when I was a kid!  Then we did the math and realized it was playing when he was an upperclassmen in high school.

Sigh... we met when he returned to the University after returning home from the war.  A graduate student friend of his was the young man who was in charge of the Christian coffeehouse ministry I was a part of in high school (this was during the Jesus Movement!).

A marriage, children, and grandchildren later...   :)

So today I honor the Veteran's and the Martyrs and those who love(d) them.

* The very best book I ever read about the difference between American Christians and those in China who suffer persecutions is the novel Safely Home by Randy Alcorn.  It is also one of my all time favorite books.
Posted by Brenda@CoffeeTeaBooks at 10:01 AM

I so appreciate the time you bloggers spend on your blogs so that people like me (blog reader, not blogger) can enjoy what you have to say. Of all the blogs that I read each day, I have been reading yours the longest. Thank you.

Please tell your hubby "thank you!" My dad was a Marine but too old for Vietnam. He taught to thank and respect every veteran. I am glad you both were able to celebrate!
Brenda, your package will be mailed on Wed :-)
Blessings, Dee

It looks great here! I'm hoping that your hubby got a few thank yous while he was out and about. Please thank him for his service from me!

I remember watching Johnny Quest as a child. I think I will look for it for my children to watch. Yes, things have certainly changed.

Thoughts for the day said...

I like the new look and didn't realize 'you' were the one who wrote this blog. good job.

Please tell your husband "Thank you!" for me. We owe him and all of our veterans our deepest gratitude.
God's blessings.

thank you to your husband for his service to our country. i had to chuckle when i read about the bigfoot marathon...i had it on, too, as i putzed around the house doing odd chores :-). God Bless You! lynne

I thought I had already commented here but I must be mixing it up with another time! :) I want to say how much I enjoy your little slices of life Brenda...it's neat to be able to imagine you in these places and doing the things (like baking...and dishes ;) that you write about. Love the pops of color and your sweet little Victoria kitty.
Love,
Tracey
x0x