Many are the afflictions... 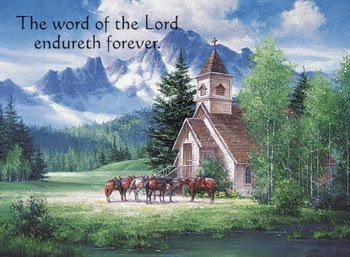 I received a call from the police in the nearby town last night, asking if my husband was 1) home, and if not 2) did I know where he was?  The dispatcher said a patrol car was sitting behind our van on the highway.

Fortunately, I knew the van had run out of gas on his way home from the Post Office before it closed last night.  I also knew he walked to fill the gas can and when he put gas in the car, it would not restart.

So... I was able to tell the nice policeman that I had a feeling they would find him at the gas station where he had walked, returning the sales' clerks cell phone AND would they please protect him and keep him out of trouble for it is on a highway and DARK.

He laughed and said they definitely would try.

To make a very long story short... the van is now at the mechanic's and a nice patrol officer gave hubby a ride home to our house in the country.  (I must say, the times we have needed a policeman, County sheriff, or firemen... they have all been wonderful!)

So then today I picked up the phone and it was a nice guy from the Post Office in town.  It seemed when hubby was photocopying an important document... the copy of which he had to send yesterday... he had left the original in the photocopier and someone (thankfully) handed it in as it was a very important document!

You know, I had almost said I would drive him in town yesterday because he wasn't feeling well.  I should have, except I would have made sure we stopped to put at least $5.00 worth of GAS IN THE VAN even if it was almost closing time at the Post Office.

Oh yeah, then he remembered last night that he'd forgotten to leave the keys for the mechanic!  It was not his best day.

However, Christopher and I had prayed for him (he had called Christopher to see if he could rescue him but our son was studying on campus and didn't have the car but he had the keys to the car so our daughter-in-law couldn't come to rescue him... don't ask).

You know what Scripture kept coming to my mind?  "Many are the afflictions of the righteous but the Lord delivers him out of them all" (Psalm 34:19).  At the time I first remembered this, my husband was still stranded in the dark on a highway beside the van and we had no cash or credit card to call a tow truck!

How did it all turn out?  He happened to be close to a mechanic's shop where we have taken a car previously so a man helped him push the van there while the police car was behind them, the policeman then brought him all the way home, and the mechanic sent one of his men out to the country to pick up the keys this morning.

I'm not so sure how I like that "many are the afflictions of the righteous" but He certainly delivered him from all of them yesterday... sigh.

Picture:  The Word of the Lord by J. Sorenson; allposters.com
Posted by Brenda@CoffeeTeaBooks at 8:15 PM

"All's well that ends well," someone has said. And someone ELSE has said something to the effect that "if it's not well, it's not the end" 'cause in the end "all things DO work together for the good of those who love God and are called according to His purpose"!

Glad your husband is safe & sound. Now praying things with the van get all straightened out for you. :)

I'm glad the Lord worked all these things out so well for you and will pray that the van can be repaired without too much expense. It sounds like there are many kind people in your community.

So glad your husband made it home safely. Aren't our public servants wonderful?
I really enjoy reading your blog. Your love of the Lord shines brightly!

Glad everything turned out all right. Do you keep flares in your car in case of whatever?

So glad to hear your husband made it home safely. Aren't our public servants wonderful?
I really enjoy reading your blog. Your love for the Lord shines brightly!

I like what Rebecca quoted, "If it's not well, it's not the end." My husband and I often say how the Lord always makes our problems work out so well. If He did not give us trouble how would we know His grace in delivering us? He's so kind. Thankful for the good, helpful people involved.
I check your blog often and if you haven't up-dated I feel like I "rang a doorbell" and you weren't home. Silly me, but I really do appreciated your good perspective on things. Thank you.
Blessings.
Vicky

Oh my. Yes, some days are like this. My husband showed up on my mother's doorstep one winter day with his hair all on end and looking like a cherry popsicle. Oh, yes, I remember. The best part of that verse is that the Lord delivers him from them all. And the little lady at home has to have nerves of steel, too. Just sayin'...

So glad your husband is okay, and so blessed to hear of the wonderful people you've encountered in the last day or two.

I have so often been amazed in difficulties, minor or otherwise, at the kindness of strangers. I am convinced that most people like to be helpful and that this is a blessing for all.

I'm glad that your husband encountered helpfulness and being watched over by God.

So glad it all turned out. My son was taking his car to the mechanic and I was going to follow and bring him home. Well, we both got in my car and drove there. What is wrong with this picture LOL! We left his car in our driveway! My husband just shakes his head :o)
Love the quote, Rebecca! That is going by my kitchen sink, Dee

Glad your husband is safe! I also like what Rebecca said! Things do always work out in the end! God is good!

So glad that your husband was safe. It makes running out of gas seem not so bad after all. The Lord definitely does deliver us from many troubles...maybe it's a good thing we don't even know about all of them! :)

What a day! I'm glad it's over and that it all turned out well.

You keep such a wonderful attitude...I feel like I would just fall apart and be angry at the same time. Thanks for being real on your posts.