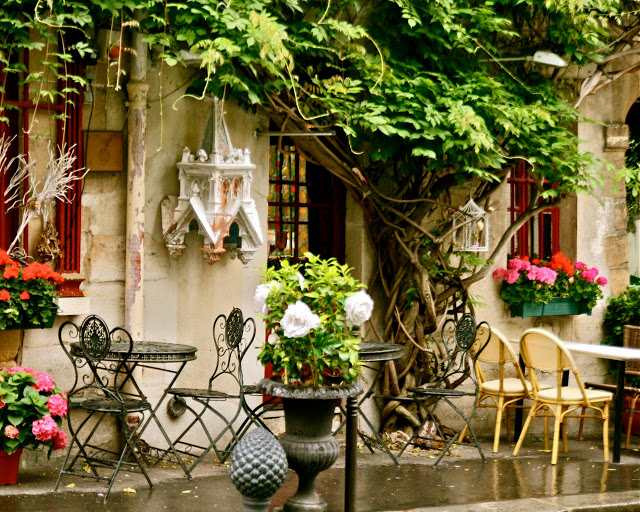 I don't know if you are having a challenge keeping what day it is straight in your mind but I am.  It took a few views of the calendar to check and re-check that it is indeed Easter next Sunday.  Perhaps the only regular part of our schedule that still exists is to walk the trash bin out to the gravel lane on Tuesdays.

My mind doesn't think it is Sunday.  It doesn't want to write.  I think it is telling me it wants all of this to be over and a return to normal... except... it also knows that normal will never be the same.  We have lost our collective innocence that it is impossible for the streets of Paris and Rome to look like ghost towns.  Even New York City has slowed down more than one would have ever imagined.

It will be up to those of us who care about the little things of life to make certain what is important does return.  The important things of the old normal... the traditions, and the family meals, and our favorite songs playing on the radio, and stopping by Barnes & Noble after a doctor's visit, and sitting down at a real table for Panera coffee and a scone.  For it is those little things that make up the big stuff of life.

It will be the people of faith who can discern the big stuff of life... what is important and what can go by the wayside.  Maybe we will remember what was most valued during these days?  What we missed the most?  Will we remember what was so easily lost as years worth of accumulated wealth disappeared within days as the Stock Market crashed?

Will we value the people who worked in the midst of this crisis to ring up our groceries, to cook the food and make the coffee so we can use the drive thru, or the doctors and nurses putting their own health in jeopardy as they save the lives of others?

Will we ever take for granted again meeting a friend for coffee, our family at Cracker Barrel for breakfast, or just spending time at the grocery store without a mask on to protect ourselves from a hidden enemy?

Did you ever think the churches on Easter Sunday would be empty?  That we would be watching the Easter message on a screen?  Although if I remember, the congregation that first Easter was also in self isolation.  It didn't stop the Resurrection or the Gospel going throughout the world.

There have been messages between my daughter-in-law and me confirming that we will indeed celebrate an Easter dinner, even if it is in May or June.  We've been known to celebrate Thanksgiving in December before so this will be no problem.

I've enjoyed seeing her photos of Piper and baby Oliver (who is almost a toddler now) having fun during this longer than planned self isolation.  There is something about the innocence of little children which gives everyone hope that all-is-well in spite of all-of-this.

We may as well find something to enjoy as we are home for long stretches of time.  Other than baking brownies and cakes and watching our waistline expand that is...  I have decided to dust off the rather large book on my shelves that contains The Lord of the Rings.  The font is large enough that I can read it so now is the time jump into Middle-earth.

It is much better than checking social media or watching the Corona Virus updates on the news.  A little is great but a lot is... not.  I have had to self monitor my screen time in this time of self isolation.

I listened to an excellent talk by a speaker yesterday, he was reminding viewers that it doesn't matter how this virus came to be (whether manufactured in a lab or from animals accidentally), whether it is a judgement from God (or not), and even if it was engineered by some foreign power to crash our economy... all scenarios he had seen declared online in previous weeks.

He reminded viewers that we are to be the same in the midst of any crisis, trusting God and doing what we are called to do every day.  Any time spent in speculation will only distract us from the work He has given us.  I totally agree, which is why I had to stop the research I was doing about the virus.  So much of it was going down rabbit trails that would make Alice's Adventures in Wonderland look tame by comparison.

Another reason to self monitor my screen time.

Recently I watched Mrs. Miniver again on Turner Classic Movies and was reminded how difficult it was for people living through that era.  As it ended, my husband asked me just how many Kleenex I went through in the last ten minutes of the movie... ummm, four or five?

The movie is very loosely based on a character in a book by the author who used the pen name of Jan Struther.  The book was originally a series of articles about an "ordinary woman" in England and her appreciation of the quotidian aspects of life.  It is a favorite of a lot of friends who understand it is the little things that are truly important.

So my friends, until next week I pray you keep healthy, help those in need, and wash your hands when needed.  Thank you for reading.

Disclaimer:  Most links to Amazon.com are Associate links.  I thank you.

Image:  Somewhere in Paris
Posted by Brenda@CoffeeTeaBooks at 6:19 PM

Sending many prayers your way for comfort in the midst of this chaos...Yes, it is the little things that make up the big things.
Bless you for writing today, Brenda! Be well. Stay safe!

Always a calming read here. I can depend on it and I do. Thank you, Brenda. Yes, researching this situation leads one to many paths. Hopefully, minds better than mine are on the job and will ultimately share the facts with the rest of us. I DO want to know.

Mrs. Miniver has long been a favorite of mine. Not only for the strength of the characters. But because Greer Garson was born on one of the islands off the coast of Scotland, as was my own mother.
I so admire the women of the greatest generation, those on the homefront and those in the trenches. My mother was Royal Navy Nursing and spent her mornings sorting through rubble looking for survivors and her evenings on the ward listening for the whine of incoming bombers.
I have no doubt that there is a heaven and that those of us who lose this earthly battle will see a far more beautiful home. I just hope it won't be too soon for most of us.
God bless and protect you. Easter blessings to you and yours, Brenda.

I love Mrs. Miniver. Such hard things they had to go through, but they were brave and just did the next thing.

I too loved "Mrs Minniver" and I agree about limiting my news viewing - I watch the Canadian, the US and the British news so it can get a bit overwhelming. My church provides a weekly YouTube sermon so that was a calming way to start the day.

Have you ever read or watched the TV adaptation of "Housewife 49"? It was written by a woman during the war in Britain and was a journal kept by women for the government. She also did two follow up books - you'd probably find them really interesting.

Dear Friend;
The thing you wrote that really ministered to me today was...."in spite of the isolation it couldn't stop the Resurrection or the Gospel from going forth"!
Praise God!!!
Kind Regards;
Trish

Just hanging loose in Michigan. My work hours were reduce....but they consider themselves essential. (They would be told otherwise if legally challenged just sayin). Because I'm working part-time in order to deal with mother, it would literally be a wash for me to collect unemployment and going to work...the difference only spending money for gas. (Before the extra cash they are adding to the checks) The boss thought better and laid me off.

I've spent my time sewing masks for others. Amazingly, I feel better than I have in a long time. I don't mind what the business sells...brings out the crafty in my....BUT the company itself is nothing buy a bond grinding sweatshop. It has kept my head above water for the last few years given my situation, but this time off has given me new clarity.

mrs miniver is a personal favorite!
bless you as you seek Him and find rest
during this most uncertain of times.

I truly enjoyed your post...just found your blog listed on another that I visited. I do not watch the news..I check the count in my county not the whole country..I read few opinions of people in news clips on the Google page...I am staying home except for walks. I liked what you wrote about having Easter Dinner at a future time...and the book tips.
Anyway, I'll be back.
Mama Bear

Funny, I just read The Hobbit this week and started The Fellowship Of The Ring last night. I read the series in high school back in the 70's, and just recently found a box set in the thrift store. I forgot how good it is! I haven't seen any of the movies, but I probably will after I get done with reading the series!

I'm reading this on April 26. I save up favorite bloggers and then have a great time reading a month's worth of posts. Kind of like reading a book by my favorite author. And speaking of authors. I have to thank you again for your book and blog recommendations. I've found more wonderful books than I can count, from you. I'm off to check out Mrs. Minera. And I've never read the LOR, only the Hobbit. I know the basic premise, but have never read the books. Sounds like a great series to get lost in. I'm still working at my "essential industry" job and it's almost gardening time. I don't watch tv or hardly any movies. Books are so much better as I can carry so many in my Kindle app on my phone and read a page or two while waiting. I've also started listening to a few cooking podcasts. Bon Appetite is a favorite.