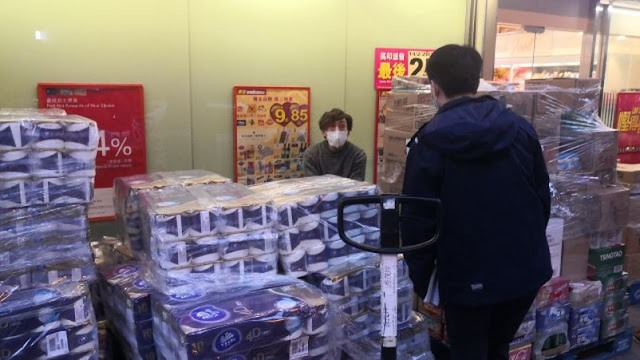 First, I want to say thank you for the stock up suggestions in comments and emails last week.  I will be including them near the end of this post.  While we are being told there is little chance for an outbreak in countries outside of Asia, what we do know has already begun here is the temporary shutdown of some factories because they cannot get parts from China.

So stocking up on food and essential supplies now would come in handy if a temporary job loss is in your future.  We have gone through two long term job losses and having a deep pantry that first time helped us be able to use unemployment income for monthly bills.  I only had to supplement the pantry with fresh food.

Did you see the report on the news of the semi truck driver being robbed as he was unloading his valuable merchandise in Hong Kong?  What was so valuable that he was robbed at knife point?  Large packages of toilet paper!  One person said, "You could eat rice when you ran out of noodles but there was nothing to replace toilet paper!".

It has been an interesting week to research this pandemic, sorting through the hype and the probable disinformation.  Those in the know who have friends in China that can get information out of the country are saying it is much worse than is being reported.  (They do still want to host the Olympics this Summer.)

I'm going to keep reading up on the latest information this week.  It is obvious there is a lot of uncertainty in the world today.  I watched an interview with the head of Augason Farms, one of the few companies left that only prepare emergency preparedness food buckets.  He said that the industry is now out of most emergency food.  Just as previously happened in a crisis situation, there were very large orders that wiped out most of their stock within days.

There were some individual food items available and vendors that already had them in stock would have them temporarily available.  Those were also expected to sell out quickly.  I was curious, so I went to their website and sure enough... most items were out of stock.  Especially the Long Term Emergency kits.  I think all of them that I looked at were out of stock.  Including those that cost thousands of dollars.  They did have individual cans of some food still available.

So I went to Amazon to see what was happening there and found most Augason Farms emergency kits were on a 1 to 2 month delay in shipping. Only some of their specific food cans were still available there and they had a minimum amount left in stock on Amazon. Some were now only available third party.  Augason Farms is known only for emergency food storage so they would be a company people would turn to first.

I checked on various Mountain House pouches and kits while I was at Amazon.  I didn't do an extensive search but I think all the pouches were in stock and their 1 and 2 day kits were in stock.  I wasn't surprised since they are known more among campers and backpackers and less in the field of emergency preparedness (unless you read this blog).

I never liked the kits manufacturers put together since you had to take what they offered in the kits.  It was less expensive to purchase individual pouches from Mountain House to cover breakfast, lunch, and dinner (or individual cans of food from other suppliers) and you could pick meals you probably would enjoy. You can supplement your own kit with items from the grocery store such as instant oatmeal packets.

Most such kits from emergency supply places would not work in families with kids unless one had a large bank account.  (Although possible if one purchased buckets since they can feed more people.)  It is worth the investment for households of one or two people and even then, far better to space out purchases over a year or two if time permits.  I have a couple buckets assembled that I supplemented with items from the grocery store.

I decided last week to walk through the grocery store when I had extra time and see what was available that could be used to stock your own emergency box or cabinet.  I don't use many processed foods because of MSG sensitivities but there are some I like to have available.

For instance, I used to purchase a large box of instant potatoes even though I often make mashed potatoes from scratch.  They are handy to have on hand when needed at the last minute.  These days I buy a 6-pack box of 4 ounce packages of Idahoan Buttery Homestyle instant Mashed Potatoes.  They are actually quite good for instant and the size is perfect for two people.

I noticed a lot of legume, rice, and pasta mixes, as well as Bear Creek instant soups (I've had their broccoli cheese soup and it is good!).  When I had a young boy at home, I always had canned ravioli and foods like that.  Of course, there are always canned fruits and vegetables.

There are a lot of protein options, including tuna blends in a pouch!  I must admit that I actually like Spam and so does my son.  I grew up on it but my husband can't even stand the aroma as it cooks.  I slice it thin and cook it crispy.  It was one of the original preparedness convenience foods from WWII.

If you want to create your own preparedness box, I saw so many items that would be great for that use.  From soups to roasted nuts in cans, the variety at the moment is excellent.  You just have to be more careful about expiration dates and rotating older items with replacement purchases.

It is not too different than the way we stock our pantries, anyway.  For me there would be more convenience foods than usual but in an emergency situation, I'd be glad they were there.

Below is the list of suggested items to keep on hand for an emergency from last week's comments and emails.  There were a lot of good suggestions!

I know this is not an extensive list today of items we could keep in our pantry.  I've already written a lot of lists previously but honestly, look at your own grocery lists and take a look at the grocery store aisles.  You will get good ideas.

Another thing, few of us have the food budget to stock up a lot at one time.  Other than my grocery shopping at the first of the month (I buy the majority of my food at that time and return for fresh produce and such during the month), a lot of my pantry deepening happens one or two items at a time.

If I need one item, I buy two with one being for the pantry or medicine cabinet.  If I am at the grocery store and notice a sale on an item I use a lot, I will purchase what I can at that time.  If it is only one can or box, then one it is.  If I can stock up on ten (like a 10 for $10 sale), I will do that.  But by keeping the pantry on our mind at the stores, it gives us focus to look for items.

I'm not at all worried about pandemics, no more than about terrorism or other aspects of living in a fallen world.  I do admit to panicking when the tornado sirens go off but when one lives in an area where tornadoes have happened many times, it is okay to panic wisely.

I hope today's post will give you ideas for your own preparedness, especially on a budget.  Speaking of being prepared, I still have a lantern showing in the Amazon widget on the sidebar.  I bought this for my husband for Christmas and we both love it.

It is small but gives off a brilliant light. We have had to use it a few times and found it far better than a flashlight for those purposes. Below is the link should  you be reading from an email.  I can't recommend it enough for an emergency or just to camp in the backyard.

You are smart to stock up! That blows my mind about the big preparedness food companies running low on stock. A sign of the times for sure. This is a great reminder to be filling in the gaps.

I think the subject of the new virus is on all our mines. I appreciate you having me think about what I need to fill in gaps in my pantry if we could not get out for weeks. I do worry about prescription drugs as I can't order them until I get close to running out.

I think it is important not to buy any food items from China. I am being to wonder about other stuff from China- I researched it said-virus can live on things 9 days.

I was talking with Tim just today about stocking up a bit. I’d forgotten about sanitary items, so thanks for your list!

Such good information, Brenda! Thank you for doing the research for us. It is amazing to think of all the shortages, already. We are so accustomed to seeing full shelves at the store. It is sobering to think that is not the case with some items. This makes me even more thankful for my nearly full pantry, freezer and fridge.

I'm going to be babysitting my three oldest grands all week and hope to do some stocking up of their shelves as well.