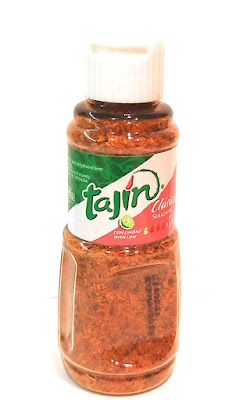 We have had a mild case of the flu here.  Thankfully not the terrible kind that has closed some of the schools.  However, it was enough that I didn't get the projects completed that I wanted to do last week.

Except for one project that, like so many, came to me when I was using a product.  I don't use Sriracha a lot but I do use it enough that it is a condiment I depend on.  Unlike people who love a lot of heat in their food and pour it on everything, I use it sparingly for just a touch of heat and its' flavor.

I say that because, as I was using it in a recipe last week, I thought I'd better check the expiration date.  Yikes!  Let's just say that I had purchased it earlier than I remembered.  I wasn't worried about using right then it since the ingredients would give it a long life but I did throw it away and put it on my grocery list.

However, there were a few condiments that were almost empty that I knew I wouldn't use soon so they also went into the trash.  For the first time in awhile, I didn't have to squeeze items in the shelf of the refrigerator drawer where I keep them.

I was relieved to find the jar of yeast I keep with the condiments was still within the time it is good.  I used to buy yeast in bulk and keep part of it in the freezer but these days, I buy it in a jar and keep it refrigerated.

Since I was thinking about condiments and expiration dates, I checked a few items in the yellow pantry and decided to put baking powder on the grocery list.  I usually replace it regardless during the Holidays but I didn't do much baking this year, while recovering from eye surgery.

Everything else was fine but I was almost out of Tajin so it went on the grocery list for Aldi, where I purchase it but it is probably available at most stores these days.  I had a sample that lasted a couple of years until I saw one of Nigella's PBS programs. She kept it just to use on melons.

I love watermelon with just salt the way I grew up eating it but once I tried Tajin on it... yum.  It became my go-to healthy treat last summer.  Tajin to me is the Mexican version of what sumac is to Middle Eastern cooking.  Except sumac has a lemony flavor and Tajin has dehydrated lime in the blend.

I had bought sumac in a bag from the Asian food store in town so the stuff in my yellow pantry is probably three or four years old now.  It is stored in a Ball jar so it is dry and it is still good (spices really do have a very long shelf life).  I do think it would be a good idea to purchase a replacement bag soon.

There are some spices that should be stored in the freezer because they can get buggy.  The two I know of are dried mustard and some types of chili powder.  I don't use dried mustard very much so it was kept in the freezer.  I don't use it at all these days.  I buy chili powder in the regular bottles at the grocery store and use it up before it has a chance to get buggy.  If you think of others, please comment below.

The talk about spices reminds me that my son is cooking through one of my favorite cookbooks, Jerusalem.  I had given him my copy and he has now far surpassed me in what he has made.  He posts photos that always make me hungry.  I highly recommend that cookbook.

I think that is enough rambling on about condiments and spices, although they are important... one can only ponder them so long.  ;)

Mentioned in this Blog Post
Disclosure:  Most links to Amazon.com are Associate links.
Posted by Brenda@CoffeeTeaBooks at 11:29 AM

Your tastes are far more exotic than my own, but you have me wondering about this Sirachi (spelling?) I do identify with the constant need to check expiration dates as it gets out of hand quickly. May you both be fully recovered from the flu...I am sorry that you lost a week to it, but I trust The Lord helps recover the time...Joel 2: 25 is a favorite around here.

I didn’t know dry mustard can get buggy. I’ll have to check mine.

I like a bit of heat, but not too much. Never thought of Tajin for melon! Interesting!

One of my favourite ways is to eat watermelon and feta salad. Yum.

Our fridge is overflowing with condiments. I use two regularly but my mother loves so many of the darn things.