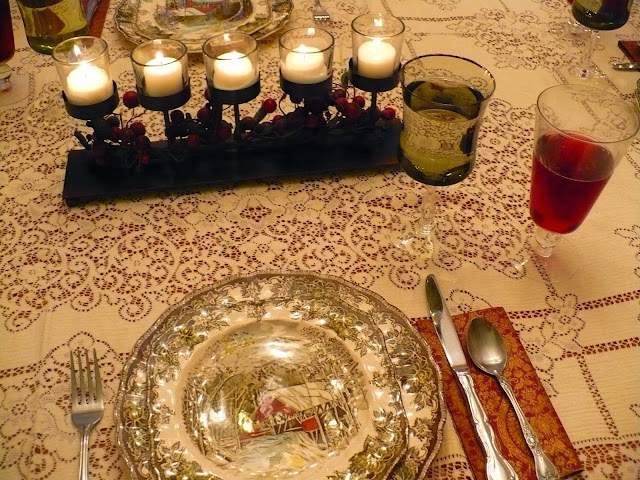 Thanksgiving is about as late as it can be and it still surprised me this year.  It was Wednesday evening when I was thinking how the frozen turkey needed to be placed in the refrigerator the Thursday before Thanksgiving so it can defrost properly.  Wait!  That's tomorrow!!!

Last year, Thanksgiving was on my son's birthday, making it easier to remember.  He had his 30th birthday yesterday.   I cannot comprehend how that is possible but I did the math and it is true.   He was my surprise child, born twelve years after his sister.  She wasn't too thrilled at the time to give up her only child status but now she likes him.  ;)

Back to the subject of food... on Thursday, I removed the 9 x 13" dish that held the chicken I had roasted the day before, ready to be transformed into orzo lemon chicken soup, and replaced it with a larger dish holding the frozen turkey.  (I learned the hard way long ago that you must put frozen poultry into another dish because it leaks as it defrosts.)

Speaking of that 9 x 13" dish, after the contents went into the stock pot... the dish had to go in the trash.  It was beyond the ability to rescue. I had set the oven to 400 degrees to begin roasting the whole chicken and imagine my surprise when a little later, I walked out to check if the mail had arrived and heard the smoke alarm going off as I walked back to the house.

In that short time, the house had filled with smoke from the oven.  No fire... just smoke.  I had to open the windows even though there was a cold rain, put on every fan in the house (I already had the fan over the stove going when this happened), and eventually took the batteries out of the two smoke alarms just for my sanity.  As soon as it was time, I pulled the chicken out of the oven.

The next morning, I HAD to use the oven again so I opened the windows, turned on the bathroom fans, and turned on the oven at a low temperature.  While there was less smoke, it was still there but eventually went away so I could make granola without it tasting as if it had been finished in my son's outdoor smoker.

Honestly, I have baked a whole chicken starting at 400 degrees many times before without the fat splattering everywhere so I don't know why it was different this time.  I probably should have turned it down to 375 degrees earlier than I did this time.

The week before Thanksgiving is a time for great prices at the grocery store.  Turkeys were at a loss leader 33 cents a pound again this year so I bought one for our Thanksgiving meal and then went back another day to buy one for the deep freeze (you could only buy one per visit).  Both turkeys were about 14 lbs and just a little over $4.00 each.

Store brand canned pure pumpkin was on a significant sale as were many items usually served at Thanksgiving.  I hear Aldis butter was significantly reduced. The only item that had gone up in price was the package of cranberries.  I bought only one package for this Thanksgiving and will buy more for the freezer when the price goes down.

I couldn't do the Thanksgiving meal all on my own, anymore.  My daughter-in-law's mom brings a couple of our favorite sides that she makes, our daughter-in-law brings a side dish, and I provide the rest.  I make the pies and the cranberry dish the day before as both taste better that way, anyway.

When I had young children, I loved reading them stories of the settling of America at this time of year.  It is so interesting to read about the food served at the first celebration of the harvest in New England.

Although, did you know that America's first thanksgiving was actually in Virginia two years before the celebration in Massachusetts?  Look it up and see how many people know this little bit of trivia at your Thanksgiving meal... and yes, I am an American History nerd.

If you don't have anyone to celebrate Thanksgiving with, invite people over who are lonely and you will all be happier for it.  It doesn't need to be a huge meal unless you love to cook.

Most of all, we need to remember in this day of Friendsgiving... there is Someone who deserves our thanks.

NOTE:  If you are need of an excellent roasting pan at a greatly reduced price, this is the one I have and I love it.  More info... here.  I have added it to the Amazon widget for the next few weeks.

Disclaimer:  Most links to Amazon.com are Associate links.
Posted by Brenda@CoffeeTeaBooks at 10:01 AM

I don’t like how late Thanksgiving is this year, but it is so we deal with it! I bought a Butterball turkey yesterday for 87 cents a pound which is the best price I’ve seen around here. Our Aldi has butter for $1.99 a pound right now.

I’m making the turkey (though my mom always cooks one too), making gravy, green beans, and probably a few pies. Everyone else is bringing things, too.

Some years we’ve had guests with us for the day, but this year it’s just family. I’m looking forward to a day of giving thanks. We are so blessed.

I learned the LEAK lesson too and probably the same time of life. Yech! We’re heading over the mountains and through the woods to mom’s house which is where my sister and her family also reside. They care for mom..memory issues. Another sister of my seeming 431 sisters lives thirty miles away. We’re all cooks. Two sisters and an adult niece and mom and me. That’s a lot of cooks. Hm. Thanksgiving will be an absolute explosion of food this year. I’m sharing homemade orange cranberry sauce, Nantucket cranberry pie, pumpkin pie, harvest salad with pumpkin vinaigrette, caramel apple bread. Oh and an appetizer. We’re also bringing two meat loaves currently in our freezer for Wednesday supper along with salad and a starch yet to be planned. Two days travel there and back home again. Looking forward but also looking forward to simple meals when home. Hoping your thanksgiving day is filled to overflowing with love and wonder.

Yes, and Canadians will tell you that the first Thanksgiving in North America was celebrated in Canada. 😁

I love that you talked about Thanksgiving with your children. I still like the New England story best. It is very clear just Whom was being thanked no matter how the story is twisted these days.

Oh How I wish I could get my family to understand that Thanksgiving dinner is such a chore for me and almost more than I can handle. It is such work for just a few of us to be here, but my husband is huge on dinner and expects it to be done since his mom always did.