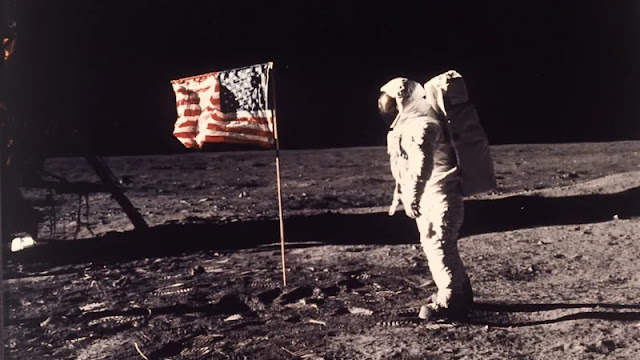 It has been enjoyable watching the coverage of the 50th anniversary of the moon landing.  I was a child when President Kennedy challenged NASA to go to the moon by the end of the decade.  I was a teenager on the day Neil Armstrong stepped on the moon and like the rest of the world, held my breath in that moment.

What got me thinking about heroes this week was the media coverage about Neil Armstrong.  While I don't know if he was a person of faith, he wasn't outspoken about it as were some other astronauts, he was definitely a man to be admired.  A hero.

The only negative coverage I heard during the 50th anniversary celebrations came from two well known newspapers who thought the program not heroic because they were all white men.  Insert the rolling of eyes here.  Honestly friends, I think the world has gone stark raving mad.  I digress...

Watching the story of Armstrong and hearing interviews, it came out that he was admired at NASA at first because of his ability to stay calm in a crisis.  All of the potential astronauts were brave but not all were calm.  Looking back, one also has to admire his humble spirit.  He often reminded the press that it took over 400,000 people for any of the astronauts to walk on the moon.

I was thinking how we were created to need heroes in our life and how they have changed from past generations.  When I was a teenager, I admired actors and singers.  I had a crush on Bobby Sherman.  However, I don't recall thinking of any of them as a hero by the true definition.

If you read the statistics about today's young people, most of them consider entertainers and sports figures to be their heroes.  They listen to every rant and read every tweet and believe what people who make their lives pretending to be other people... and those who get paid to play games for a living... espouse as Truth.

My heroes were people who had performed brave acts, ran into danger to rescue others, fed the poor, fought wars to save freedom, helped others in dangerous situations, discovered new medicines, used medicine to cure an illness, took the Gospel to foreign lands, taught us how to be men and women of faith, wrote beautiful words that brought us into another world, painted stunning artwork, took photographs of nature that took our breath away, and taught us (well, me) how to make the perfect roast chicken.

One of the joys I found in parenting was introducing my heroes to my children.  Of course, there were a few who could only be appreciated by my daughter for they were my homemaker heroes.  But both learned about brave men and women of the faith, science heroes, adventure heroes, missionary heroes,  culinary heroes, heroes in the arts, obviously Bible heroes, and many more.

Now, I am not talking about hero worship.  That is not only dangerous but can come close to idolatry.  No, we have all had instances where someone we greatly admired either was never the person they claimed to be or... and what happens most often... fell from grace due to their own bad decisions.

That is why I love biographies and autobiographies.  Although I know a person who says they do not read them because they consider them fiction, I obviously do not agree.  Yes one may embellish their resume here and there but the truth has a way of coming out.

When I read a biography, it is like looking at history through the lens of someone who was there.  In times and places that are impossible for us to reach now.  There are women who led such interesting diverse lives such as Golda Meir, Madame Curie, Julia Child, and Mary Berry.  Except for Berry*, I do not recall any of those women professing to be Christians.

When I wanted to learn more about my heroes of the faith, people whom I wanted to become like, there were books by or about Edith Schaeffer, Elisabeth Elliot, Anne Ortlund, Ruth Bell Graham, Corrie Ten Boom, Amy Carmichael, Charles Sturgeon, Jonathan and Sarah Edwards, and dozens more who through the years helped anchor my faith and my theology.

Through good books about brave people, we can teach our children and grandchildren about real heroes, those living now and through history.  Like those who braved the unjust laws during the Civil Rights Movement to help bring equality to the country.  Like those men and women who studied science and engineering and math and all that knowledge required to send man (and later women!) into space.

We can read about the men and women from the time of the American Revolution and those who fought on the side of good during the Civil War (North and South).  We can experience what it was like in the Gulags of Russia as seen through the books by Alexander Solzhenitsyn, whose writing about Truth landed him in Gulags and then in exile.   Heroes.  Real people heroes.

When we teach our children about heroes, we must always remind them... in an age appropriate manner... that there are no perfect people.  Our heroes have clay feet and even the best of men and women fall far short of perfection.  We should never put people in the place that only the One Perfect Person who lived belongs.

If someone was a hero because of their character, then how they lived their life was important to me.  I didn't want to hold someone up as a hero of the faith if they lived a double life.  However, I have people I look up to for their abilities whom I know are not people of faith.  For instance, I adore Julia Child and Jacques Pepin but neither were (are) the least bit "religious".   But I do know they lived interesting lives and I enjoyed their autobiographies very much.

Are there people whose biographies and autobiographies I wouldn't read? Definitely!  There are people that when I hear their name, my eyes cross and my blood pressure rises and my eye gets a twitch.  So I could not read an entire book by or about them. There are plenty of people I do admire to spend precious time on those I do not.  ;)

So before this gets too long, the second part will be coming next Sunday.  I think it will be fun.

*Mary Berry talks about how faith got her through when her nineteen year old son was killed in a car accident in her biography Recipe For Life.  Info... here.

This is so true. Real heroes like Richard Wurmbrand. Elisabeth Elliott, my mother in law. These are people whom we’ve held up for our children to emulate and be encouraged in their faith by.

I love to read biographies and autobiographies. Peoples lives are so interesting!

Most of my role models have been in books, either fictional or real life. It's one thing to know to do something that's right and good, but to actually see how people put that into practice is really helpful and encouraging. I agree that many people admire those who really haven't done much admirable!

... rolling my eyes along with you at the idiocy of oh so many in this stark raving mad world anymore. and nodding my head in agreement throughout your blog post so well thought out and written. total agreement. ♥

I always have enjoyed Mary Berry’s sweet nature and am thrilled to learn that she is a woman of faith. Yes, the whole world seems to have gone plum loco yet again.Saw a meme that says it so well: if all you can talk about is the color of your skin, you are the racist.

Received the most delightful card today...a little rabbit sipping her tea is reclining at a window sofa. I was totally charmed.

Very nice post and I'm also doing the eye-rolling along with you!