Living the Pantry Lifestyle - Preparing for the sudden emergencies 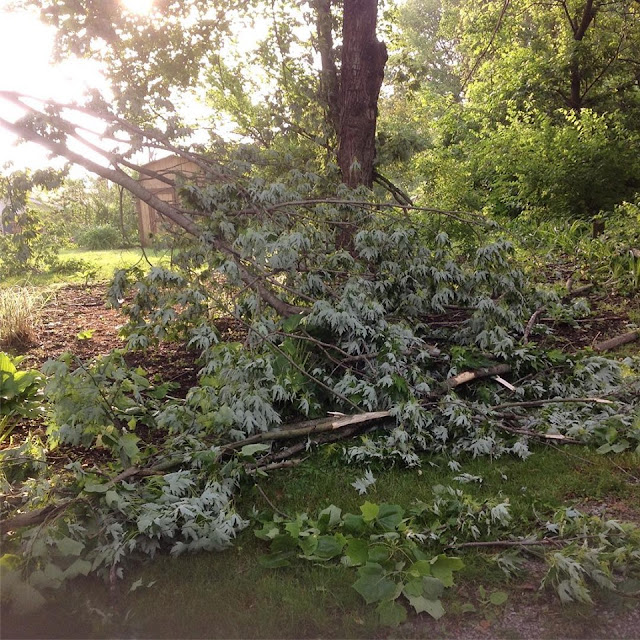 I mentioned last week that there were tornado warnings when my family were all together when visiting.  While the part of town where we were taking shelter in the basement was fine, what I didn't tell you was what we were hearing on the television.

Like most stations, our local meteorologists stay on air during any weather emergency.  I could hear where they were saying funnel clouds had been seen by spotters and then confirming damage in that area.  It was our neighborhood in the country.

As soon as the radar showed the worst of the storm had passed, my husband and I headed home (in spite of tornado sirens going off again but we knew it was not affecting our part of the county).  Everything looked fine until we turned onto the road about two miles from where we live.  Suddenly there were branches in the road, causing us to have to weave in and out but we made it close to where we live.

When we turned onto our County road, they were stopping people and having them turn around due to large trees down on the road.  When we told them where we lived, they said we could make it that far.  We knew something was not right when we turned onto our gravel lane and saw all of our neighbors standing outside.

There was wind damage everywhere, including the large branch from a tree that was partially on our driveway.  The good news was... no houses were hit and no people injured.  Of course, the best news was that Florentine was scared silly but safe!

Power was out everywhere and it was not until the wee hours of the next morning that it was restored.  It took about a week for us... working a little at a time... to clear debris and a week later a tree service came to finish cutting large limbs hanging dangerously from our neighbor's tree.

It was the second fairly long term power outage we had this Spring and another reminder of how we were prepared and how we... were not.  I had enough water for a short term power outage (we have a well but it takes electricity to bring the water into the house).  I had a battery powered radio so I could turn to a local channel and get weather updates.  I had plenty of candles and matches and since I knew there were no gas leaks, using them was fine.

I had enough food that did not have to be cooked but if it was a long term emergency, I could have used more.  I have a very small Weber grill and charcoal, which I would have moved to the deck if necessary the next morning.  (When our gas grill went kaput, we didn't replace it.)

We were careful to open the refrigerator only when absolutely necessary and did not open the deep freeze at all.  Our land line phone did not work but the cell phone worked and I used it to text the family to keep them updated as to what was happening.

I was very happy that I had downloaded a couple episodes of Salt Fat Acid Heat on the Amazon Fire to watch in an emergency, as well as a movie.  You may remember that I realized during a Winter power outage how just having something to watch when everything around us was very dark was wonderfully encouraging.

The tablet had been charged that morning.  I have a habit of charging our (flip top) phone first thing in the morning and about dinnertime each day. I know some people charge their smart phones overnight.  I charge the Kindle Fire tablet and the Paperwhite Kindle when I notice they are getting to be around 75% of power.  My old iPad loses its' charge quickly but I only use it to read emails and sometimes for Instagram.  But it gets charged, too, regularly.

When the power came back on, I plugged the emergency radio in to recharge those rechargeable batteries and everything else I had used during the outage.  I was glad it didn't last longer as some areas where trees had brought numerous power lines down were without power a couple days.

What did I learn from going through this again?  Well, I needed to make a list and keep it where I could see it all the time.  Like on the side of the refrigerator. I think I will remember what I need to purchase (a little at a time) for such emergencies but then I forget.

I also need to go over my lists of food that does not need to be cooked.  It would be good to have on hand in a longer term power outage.  None of them have to be "survival foods".   Some like peanut butter, crackers, fruit, cheese, trail mix, etc. are items I tend to have on hand, anyway.  Of course, using those food items that require refrigeration up first.

I also need another box of matches.  Sigh...

What if it were a long term emergency?  I'll ponder that and be back next week.

Mentioned in this Blog Post
This link is to the camping lantern I am talking about.  I have found for home use that it is better to buy one or two less expensive models than paying for those sturdy enough to survive an expedition to Mount Everest!

There are models cheaper than this and far more expensive.  I'm kind of like Mama Bear (The Three Bears) here... I go for the middle of the road models.
More info... here.

Note:  Once again I thank you for your patience regarding typos and grammar mistakes.  I can't tell you how many times I proofread and then go back and read it the next day and find errors.  The challenge in having one eye with less than clear sight.  But we do the best we can!
Posted by Brenda@CoffeeTeaBooks at 7:12 PM

i'm so glad you and your hubs are safe..
and florentine as well bless her sweet kitty heart.
i've saved the link for the lantern you suggest
and will have a better look at it with my hubs
later. for now though it's 5pm in my corner of
the world and i need to figure out something
for dinner. eggs it is. ;)

Really good, practical advice! I need to think through emergency preparedness. I know our camping lanterns take the mini propane bottles, and we need more. Matches would be good too, though we have lighters.

Lots to think about!

Glad you're safe and without a ton of damage.

I take it you don't have a gas cooking stove? You might watch around on FB marketplace near you or craigslist and find a Coleman propane camp stove. You can even get them with one burner and the other side a grill. Or.....Walmart sells a very inexpensive butane burner. Folds up all cute in its own case, very lightweight. The cans of butane are small as well. If nothing else...you'll have a hot breakfast and coffee lol. Although I've got a propane stove, I still have both types...more for outdoor excursions.

I've got a combo of oil lanterns and propane lanterns. The latter being $20 to 30 depending on the brand. They run off the one pound bottles of propane.

While I have a generator, we found that its virtually impossible to start in the dead of winter.....this old gal just doesn't have the snap she used to. lol

Hit send before I should have....an inverter isn't a bad plan either. You can hook it up to your running car battery and, depending on the watts of the inverter, viola'....basically a generator. Supposedly an idling car uses a quart of gas an hour. You wouldn't run it all the time, but could in order to get some tasks done.

You might be interested in Steven Harris Steven1234.com.....he has a boatload of info on various sites with links.

Glad you are okay and not much homme damage. I am sure you will be more prepared for the future but it is good that you did have preparations in place.


I am so glad you all are okay. You may want to check out Patsy Norward's blog "A Working Pantry" - she's been through hurricanes and is one very prepared woman! Shirley from the Pacific Northwest

Maggie from Stillness at Cherith said...

Relieved to hear everyone, including sweet Florentine, are safe.