Living the Pantry Lifestyle - Should we prepare for a national emergency? 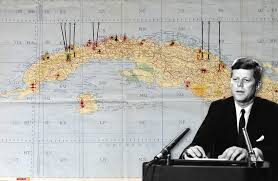 The late Howard Ruff tells the story of driving on a highway and listening to the radio when the news was breaking about the Cuban Missile Crisis.  He stopped at the first pay phone he came to, called his wife, and told her to take all the cash they had to the grocery store to purchase food and essential supplies.

He said it was embarrassing that, as a Mormon, they had no extra food in the house at all.  He was hoping that his phone call alerted her early enough to get to the grocery store before there was a run on food.

This event was the reason he included a large chapter about having a supply of food and essential supplies in his book, How to Prosper During the Coming Bad Years, and included such advice often in his economic newsletter he sent to subscribers.

Those of us who went through the 1970s may forget that preparedness was written about by quite a few people, as well as a "back to the land" movement coinciding.  This was the age of excessive inflation, long lines at the gas stations, a cold war, and the memory of how close we came to nuclear war during that crisis.

I had been raised with the importance of having at least a small pantry since my father worked most of the year but was laid off during the winter months.  But Ruff and others took it a step further, talking about the need to have what I call a "deep pantry" for crisis situations.

Can we or better yet... should we... stock up for a possible national crisis?  I have found through the years of writing about preparedness that for a Christian, that is an area we need to ask God for wisdom.  I have known a lot of people who have felt a nudge from God to prepare even deeper than usual and I have known people who believed they were to keep only a regular pantry.

If you decide that you want to deepen your pantry to prepare for a national emergency and you never have before, the reason I believe in asking for God's wisdom is that it takes a lot more planning, upkeep, and budget than regular stocking up.

Through the years, I have seen people put a lot of time and money into being prepared and then losing so much of it because they did not have a plan in place to rotate canned goods and other items that need to be used within a specific time.

Did you ever watch the "prepper" reality TV shows popular before 2012 when people were preparing due to the Mayan calendar "prophecy"?  (Which by the way, did not predict the end of the world but the end of what they considered one age before entering another.)  Of course, they filmed the most elaborate and outlandish kind of prepping but there were basements full of food and other supplies.  Left in boxes.  Unlabeled.

At the time, some of the prepper websites I follow said they were contacted by producers but most decided against being filmed.  I don't recall who it was that agreed to be filmed but they were sorry about doing so later when they felt the editing of the show made them come off as something other than the normal person they were.

Do I believe in being prepared for a national emergency?  Yes with one stipulation... if you truly believe God is leading to keep a very deep pantry, you need to do so.  Do only what you can without going into debt.  Stock only what you know your family will eat and use and not what someone else thinks you should stock.

Make lists, keep track of everything, mark dates on every can and bottle and package.  Make certain everything is stored where rodents cannot get to it (I speak from experience there).  It will take time but if God is leading, it will be something you actually enjoy doing.  If you hate it, you need to keep praying if this is something you are doing out of fear or by God's nudging.

All of us need to be aware of what is going on in the world.  I rarely watch any national news broadcasts but I do receive news alerts from a few sources that I (mostly) trust.  We can ask God's wisdom to hear and understand the signs of the times we live in and if what we are hearing is saber rattling or an impending national emergency.

The Cuban Missile Crisis happened quickly but the cold war had been going on since the end of WWII.  There were Christians who saw the possibility of another world war in Europe, even when some national leaders were skeptical.  Stories abound of people who started putting back a little here and there and had food to share when the worst of the war was happening (I usually do not believe in telling anyone if you have extra food put back but in these small villages, they could trust each other).

Next week I'll write more about really deepening the pantry.  I did it once when I felt God was nudging me prior to Y2K.  Although nothing happened (and that was only because of the amount of money and manpower that went into fixing the problem ahead of time), we did end up having a job loss soon after where we used most of what I had purchased.  What we didn't use, I learned a lot about what not to include in our pantry.

Mentioned in this Blog Post
How to Prosper During the Coming Bad Years... here.
(This book is completely out of date regarding financial information but it has some good preparedness ideas.  Sometimes you can still find it in your library.)
Posted by Brenda@CoffeeTeaBooks at 12:46 PM

This is kind of an aside, but re: the person who felt misrepresented on TV...

I was interviewed once in college for a newspaper article. Technically they quoted me correctly, but the way they used it made me come off badly and offended quite a few people. Lesson learned.

I've thought for some time a person would have to be nuts to allow strangers to film and represent you to the world. I feel that way now even about written interviews. Too many people have an agenda. They don't want to accurately report what you said. They just want to find a way to edit your words to prove their preconceived bias and the worse they can make you look, the better for them because it means clicks and controversy.

Not that I'm cynical or skeptical or anything. Oh wait. Yes, I am. LOL!

I have been misrepresented by the media. It is all too easy for someone to twist words to make the point they want to make.

I would like to have a deeper pantry. Our pantry is in complete disorder and I refuse to add more until it is sorted.

Enjoying your recently discovered blog. It’s amazing to me how many folks are realizing the importance of having a deep pantry. It’s also funny that some would think it strange, My Mom would have been able to feed our family for at least 4 months from her pantry. Even my dirt poor Grandma had a stash to draw from. It is only in our generation people have become complacent. One thing I will say is that I have learned to be very careful about with whom in my life I discuss the subject. Have a friend who has a much deeper pantry than mine. And have recently realized that she will let fly with a tidbit of information about my business that didn’t need to be shared. There may just come a time when that could cause harm. Another friend dropped a comment one day she wasn’t worried about any emergency National situation because she knew I would bring her food. Say what? I have multiple grandchildren in town who will be my number one priority to help. Then there are elderly neighbors. Children in my own neighborhood. She has the knowledge, ability, time, and money to prepare for herself, but is just plain too lazy to do so. Not to mention the two bridges that would have to be crossed for anyone to bring her help after something like a major hurricane. Thee are so many scenarios that could keep people from bringing you help! So yes, please, show wisdom.

I always learn something from your pantry posts, Brenda. I'm looking forward to the next one! I feel glad that Kyle and I took the time last month to sort and organize our pantry. I would like to deepen it. Have to make a plan for that.