Sunday Afternoon Tea - Looking for Beauty in the Thin Places 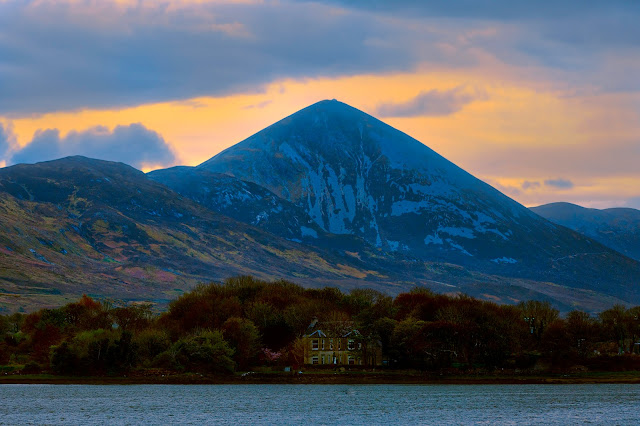 I have a fascination with what Celtic Christians termed "the thin places".  That name originally given by pagans to locations where they believed the boundary between Heaven and Earth is "thin".  Then taken up by those who follow the One True God to describe locations where it seems easier to hear God speak to the hearts of men.  Where it seemed the very Breath of Heaven could be felt as the cool breeze rustled trees on a hot, dry day.

I admit this term is often used in the New Age movement, too.  However, like so many things that God created... the enemy of our souls has a copycat version.  Which is why from the oldest of chapters in the Old Testament, we are warned of the danger in following false gods.  We understand that we are not to worship the tree but the God who created it.

I like to look at the Bible to see if there is anything similar to what we find in this 21st Century (or Middle Ages) world.  Of course there is, only we do not call them thin places.  They are called Mt. Sinai where God spoke to Moses and Peniel where Jacob had the vision of the ladder going between Earth and Heaven.

We cannot forget the Judean desert wilderness where John the Baptist lived and our Lord experienced 40 days of praying to the Father and being tempted by Satan.  St. Paul was led to the Arabian desert for three years after his conversion to Christianity to be taught by God Himself.  All places where one would be alone with God to hear Him clearly.

There are more instances in the Bible where our ancient fathers and mothers had experiences with God that were beyond the normal.  We are told that they often built altars to God on that particular place as a remembrance of His presence.

Of course, both the Celtic Christians and those of us who are ever so much more sophisticated know that we can talk to God and hear from Him in any location.  But I understand why the thin places would feel special.  I have often wondered if it was not so much the location itself but the people who came to inhabit each place that made it special, leaving an imprint of their own holy... albeit imperfect... walk with God.

I do know that whether on an island off the shores of Scotland, a woods in England, or on a mountain in Ireland... these places where it is said one can hear from God are always in the seclusion of natural beauty and... peace.

I know in my own life that in the darkest of days, I hear Him best amidst the beauty of nature.  There were many times in the past when I prayed as I walked a trail in the woods or sat on the shore of Lake Michigan with an open Bible... the silence brought His voice clearer and the surrounding beauty sent my thoughts to Heavenly places.

The Bibles tells us that God inhabits the praises of His people.  Perhaps in the midst of the natural beauty surrounding those who came before us... those who chose to live in remote areas to devote their days to prayer... they brought Heaven closer to Earth.

The results of their prayers and devotion was the British Isles turning from paganism to Christ.  I have read that many of the Celtic Highlander Scottish believers left their country during a time of persecution and settled in North America and Australia.  They arrived in America just in time to help spark the Second Great Awakening.

These thin places as they are called, while beautiful in their surroundings, were not always places of warmth and comfort.  Especially those islands off the coast of Scotland, Ireland, and England.  The brutally cold winds of winter would cut through one's home since many were made from stone... before the days of thermal windows.

Sometimes I think those surroundings reflect our own life on this planet.  Our lives contain both seasons of great beauty and seasons of harsh reality.  There are days when we give praise to God as we enjoy an obvious answer to prayer.  Then there are the seasons when our prayers seem to hit the ceiling and life continues one difficult day at a time.

But I'm thinking... and the more I ponder, the more I believe it... that the harsh climate and the surrounding beauty were both needed to form these men and women into the fierce warriors of God for which they are known.  Some prayer warriors... a few actual saints who went into battle.

It is the same set of circumstances which transformed the place in which they lived into a thin place... one where it was easy to hear from God.  Serious, continuing, and persistent prayer isn't needed in the good times but oh, how we fall on our knees when the hurricane force winds of adversity are whirling around us.

Perhaps that is why we have created our own thin places, where we hear His voice easier.  Not all of us can spend days hiking on trails, or watching waves coming and going on a beach, or even sitting on the front porch in a rocking chair watching the return of the forest birds during a morning quiet time.

We are much more likely to pray as we wash the dinner dishes, change a diaper, sweep the floor, sort the laundry, or wait for the children during soccer practice.  Many of the instances I most felt God's presence was when I awoke in the middle of the night and moved to the sofa, deeply burdened for a loved one or a national leader.  Prayer came easier in the darkness, with no distractions of everyday living.

In closing, I think often of Susannah Wesley raising ten children, whose daily prayer ritual consisted of throwing her apron over her head to get some alone time between this mother and her God.  God took those prayers as seriously as if they were asked from an altar in the greatest of cathedrals.

Susannah could not travel to a mountain in Ireland or spend a week at a retreat with like minded women but she helped change the world through praying, as well as the rearing and education of her children, especially John and Charles Wesley.

This should give each of us hope that God speaks to us right where we are... as we search for the beauty that surrounds us in nature, in our own home, or perhaps even in the people for whom we pray.

Image:  Croagh Patrick in Ireland
Posted by Brenda@CoffeeTeaBooks at 8:07 PM

Thank you Brenda. God bless your both practical and poetic spirit! And this article reminds me I need to get away to the a thin place I know, and which I have been neglecting! Mairin.

I’m lying in bed late tonight, praying and pondering. I appreciate what you’ve shared here and feel encouraged to be like the ancients and turn to God in deeper prayer!

I like this theory about "thin places". I even think I know a pair of such places, where you really have a special feeling

There are places where I feel closer to God than in others; however, God is everywhere and can speak to us wherever we are, in any circumstances, and in spite of other distractions. I am very grateful for this as I seldom find myself in my own special place. I have always loved the story of Susannah Wesley. She really was a remarkable woman and an outstanding mother. I had not known that she had to farm her children out to others’ care for financial reasons. What a long two years that had to have been for her.

My thin place is best created where there is music lifting God up in praise and putting melodies to prayers and scripture. My mind has such a tendency to distraction (ADD) music helps me keep my focus.
I dream of visiting these ancient "thin places". Iona and Lindisfarne are too of them.

Yes, the thin places. For me, the garden, nature and worship music. And Scripture. The Joy of His Omnipresence! - I'm ever thankful.

Today's post really touched my spirit from the standpoint that I have Celtic ancestors and they revelled in the thin places. I frequently feel that I can worship the Lord or pray to Him even as I do the dishes or other housework. Bless you, in His name.

I also ( as many Amercans say but don't necessarily think of it as anything special - to each their own [?]) Come from Celtic ancestors: Welsh,Scottish and Irish. I pretty much represent all of the British isles plus German and French.
I feel the same about prayer and praise throughout my day in all different activities.