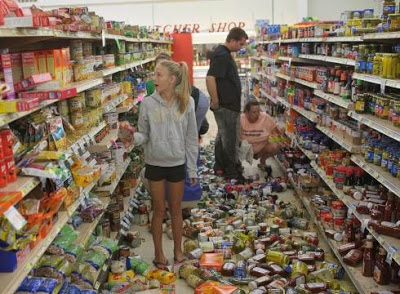 I saw an interview recently with the head of a company that makes emergency preparedness food.  He was saying the food is getting more expensive, not only because some food prices are rising but because less people are preparing, some companies have gone out of business who made such food.

Now, food prepared for long term storage was not high on my priority list but after reading a book by a father and daughter who joined a mountain climbing team, I decided to try Mountain House pouches.  That brand is what most hikers liked best and they were available to purchase one meal at a time (each pouch feeds one or two people, according to appetite).  So I tried a few various pouches and then purchased a few for a true emergency.  It is nice to have some meals put back that one doesn't have to worry about shelf life.

I thought for awhile about what he said, it came after a couple weeks of headlines which would indicate plenty of reasons to be prepared.  U.S. war ships are moving toward the Middle East due to rising concerns about Iran.  War in the Middle East is already happening if you count the number of missiles hitting Israel.

The uprisings in Venezuela are getting worse.  A possible trade war with China looms. Not to mention continued wacky weather causing problems with our food supply.  Farmers here have been trying to plant in between rainy days.  Would any of these affect us directly?  Perhaps not but a few of them could easily make the cost of oil rise sharply, bring an increase in the price of so many things.

I have to admit that I haven't written about preparedness for a long time, even though it was one of the original reasons I started blogging. It isn't that I don't believe in preparedness anymore, for I still believe it is essential.  I felt like I had written about it so often, there wasn't more to say.

However, I think it is time to revisit the subject of preparedness and why I began calling it "deepening the pantry" long ago instead of emergency preparedness.  I became concerned that so many articles about preparedness online seemed to be more about Armageddon than for instance... job loss, bad weather, etc.

When our view of being prepared is only about the big stuff, we tend to get easily overwhelmed.  Quite often the advice is as life changing as a move out to the country or at least it contains long lists of what we need to buy and store for hard times.  I changed my mind about that long ago.

I've written about preparedness since the 1990s and the number one reason I find people stop any kind of preparing for hard times is that they get this idea it is all or nothing.  When instead of a bunker mentality, we should have a great grandmother mentality.

Those who came before us would think having one week or one day's worth of food would be only for the very poor.  Yet, prosperous families all over the Western world have very little in their pantry.  I grew up with a mom who kept a pantry but many families I knew only shopped for food once a week and kept no reserves in the house.

Those who came before us were connected with the land and with a knowledge of how quickly life can change.  They knew there was a season for planting, a season for harvesting, and a great need to preserve food and set aside those items that would get us through the winter when there were no gardens in the backyard... especially in Northern climates.

So I'm going to talk about preparedness and pantries again for a few weeks.  I think it is time.  Next week I will talk about deepening the pantry for day to day use.

Mentioned in this Blog Post
I mentioned that I do have some pouches of freeze dried food that I have set aside for true emergencies.  There is a place for them, although in my home they are just extras to my regular pantry.  I find them good insurance for true emergency situations when I may not be able to cook.

Augason Farms Banana Chips... here.  (I have one of these cans in case carbs are needed quickly in an emergency.)

*These 4-Pack offers are new since I made a purchase and a good way to save money from individual pouch purchases if you know you like a product already.  I noticed some foods have 3-Pack offers.  Most Mountain House food is also available in #10 cans.  Although these links are to Amazon, I did see Mountain House pouches at Walmart's camping section but that was years ago.  I haven't checked recently.

Disclaimer:  Most links to Amazon.com are Associate links.
Posted by Brenda@CoffeeTeaBooks at 5:57 PM

Thanks for bringing up preparedness again, I keep a pantry but have gotten lazy and things are out of kilter...so it is time for me to spend some time thinking about what I have and what I need.

Oh I was going to order some of these packets the last time you spoke of them, not because I am keeping a deep pantry, but I like to have some things on hand on general principle.

I found myself getting a bit lax after the big preparedness push. I've done less canning and putting by....it is just me in the house now, so I guess I figured it wasn't worth the hassle. I did put up a canner full of assorted dried beans...it just seemed easier to can some rather than soak dried ones every single time for one person.

I've been getting back into some baking again. One's tough with dough can get rusty when not used. As I glide toward my retirement years, I see that I will use those preparedness skills more to help the finances.

Thanks for the ideas. It is very hard for me to prepare as we are gluten free...plus do not eat pork or fish (not me at least)...when we lived in NC I did get a lot of individual cans of dried fruits and veggies mostly...those were given to the kin back there when we had to move West again. SO now, just some canned goods...I should research however and see if we can find a few things we CAN have...and at least fruits and veggies are good. One thing Trader Joe's out here carries is dehydrated broccoli. With salt and a bit of oil on it. For a snack. I never use it like that...it goes GREAT in my super duper healthy homemade chicken soup!! You would not know it had been dried in the soup (I try to smash it up some before adding to my soup). So there may be some things here and there like that, which would last a fairly long time I think. When you have food allergies, you are constantly hunting alternate ways to cook anyway. And actually, some of the alternate flours do make some pretty yummy stuff.

Our son got the Mountain House pouches for himself at our Walmart in Calif less than a year ago. Although Walmart has camping things all year summer is when they seem to keep a better supply. Perhaps if they are not seen in the winter months they may have them later then. Perhaps someone in authority would know?? Usually when I ask there though they say they get what they get and they are not told ahead. LOL

With summer coming and veggies and fruit loaded in the stores and perhaps our own back yards, it is a good time to really work on keeping as much of it from going to waste as possible and canning , freezing or dehydrating as much as possible for our pantries. I know many of us do this already but I hope more take it up. It always surprises me too to hear people say they have only say 3 days worth of food at all times in their homes. Goodness, it takes little to disrupt you from being able to get more when needed. Even your own car battery could fail and disrupt things causing you to have to stay home and not shop for more food. Things happen when you least expect..we all know this. As you say, just getting a bit extra is better than nothing. If you see canned tomatoes on sale this week and need them get one to use and one or two for the start of our pantry. Not hard and you are already ahead of where you were a week ago. Buy ahead only what you usually cook with not products new to you. I know you will cover it way better than I can in your next post! LOL Sarah

I will say having a full pantry is so important ,10 years ago or so , my husbands pay check was slashed between 1/2 and 1/3 suddenly , I had followed my gut instinct and had stocked our pantry ( meat in the freezer too ) the year before , we bought hardly any food that year ,cut all our " extras" TV, Internet , clothing , cut electricity use drastically , and heating too ..wow we ended that year with $5,000. MORE savings . Crazy I know...guess it shows how "wasteful" we were , it is important people know HOW to do these things ,my dear relatives at that time did nothing, lived off credit cards , because they didn't want to " deprive" their children of anything ,they told us we were being ridiculous . they are still struggling 10 years later..This is important knowledge , what to have on hand AND how to cut back Everything not vital to survive.

There has been so much extreme weather lately, probably due to global warming. Lots of people lose their jobs or have their work hours cut back due to companies downsizing. So it never hurts to be prepared these days.

I like your approach very much. So many "preppers" are all doom and gloom and I find them overwhelming. I like to look at is as being sensible and saving money where I can - and who doesn't like to do that!
My mom and stepmom always kept a stocked pantry - to save money & to make life easier in the long run. I do it also because I have been laid off in the past - I am now retired and on a pension. At the moment I can work PT for extra money but there will come a day when I won't be able to do this so I need to look to the future. The more I can plan ahead (and a pantry is a big part of this planning) the better off I will be.