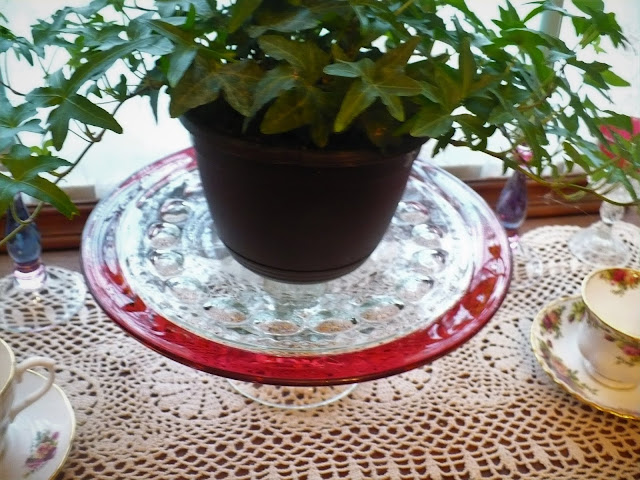 I almost titled this something like "everything I didn't get accomplished this week".  Another week of mostly rainy days has set my little-at-a-time yard work plans way behind while irritation in my right eye set my reading and reviewing plans equally past due.

Last month, I purchased a package of 32 oz. freezer deli food containers that a food blogger had raved about recently.  It so happened that a friend needed some containers for her Seder dinner so I gave a few to her even before I tried them.

They work great and are exactly what I need for my plans to prepare soup in the cool of the mornings for the deep freeze.  That project has not begun but it should this week.

I may eventually purchase the 16 oz. freezer deli containers.  They will be the perfect size for other freezer foods.  It has been a goal for a long time to stock the deep freeze for those days I'm not feeling all that great.  The Great Freezer Disaster of 2018 put that way back on my calendar but now it is cleaned and disinfected and has been in use a couple of months.

Yesterday was my first stock up grocery shopping day since it has become Spring (kinda' feels like Spring).  I'm slowly making the transition to warmer weather cooking while preferring my lower cost proteins at the store.  I do not serve meat based main dishes but a few times a week, which helps the budget.

I bought two large whole chickens on sale for 99 cents a pound and one family size package of chicken thighs at 99 cents a pound at Meijers.  I purchased two packages of Aldi's organic ground beef (I had two in the freezer and this pricey item is not one I stock up on) and one package of round steak that will be cubed for an oven stew.

I had a coupon for my favorite brand of thick bacon and it was on sale so I purchased one package for the deep freeze.  Although I may make bacon and eggs or BLT sandwiches sometimes, I prefer to use it as a seasoning... a delicious seasoning.  I mean, really... bacon.

I'm still working on warm weather dinner ideas but a few things I always do is to plan more stove top main dishes and easily assembled dishes.  We have more sandwiches in warmer weather like chicken tacos (using chicken I may have used in a casserole in cold weather).

I also plan to dust off the lentil salad recipe I used for my son's homeschool graduation (so that tells you how long it has been since I made it!)  It was given to me by my Jewish friend, Sheila (who recently had the Seder dinner).  I'll put the link to it below.

In addition to trying some more similar salads.  I like lentils so there may be more experimentation with them.  I do not like quinoa.  I've tried! So no quinoa based salads.

First... how did I get so interested in ethnic foods?  Well, you can mostly blame my two kids for that.  We liked the usual Chinese, Italian, Mexican, etc. restaurants already.  However, both kids introduced me to new foods when they were in college.  I remember the first time I tried hummus!  That was when Stephanie was in college.

Christopher and I both worked part-time at a bookstore on campus at one time, so we had lunch together once in awhile.  He introduced me to other Middle Eastern food (including my first taste of hummus with sumac) and my favorite restaurant was an Indian place that had great food.  The last new restaurant he took me to before moving away was a Vietnamese Pho restaurant.

We are basically a foodie family so we enjoyed trying new foods when we traveled, too.  I no longer travel but one of the kids will often tell me about a new recipe they are trying.

I did try both types of za-ataar (mentioned in last week's Pantry post) on store bought hummus and the American style was the big winner there.  Probably because it has herbs I'm used to already.  I also like just sumac sprinkled on hummus but the za-ataar added a nice depth of flavor that store bought hummus can sometimes use.  I will try more za-ataar suggestions from Comments, too.

I was also asked if one can roll out their cinnamon rolls and let them rise in the refrigerator over night?  I have a small refrigerator so I've only had the dough rise overnight covered in a bowl but I think I saw the Pioneer Woman do that on an episode of her show.  She has those huge refrigerators at the Lodge.  I don't see why not as long as they are covered completely with plastic wrap.

You may want to let them sit uncovered (so moisture does not condense on the plastic wrap) at room temp fifteen or twenty minutes before popping them in the oven.

I think I'm caught up but if  you have questions, just leave them in Comments!  I know most people do not take time to leave a comment and I get it (I rarely leave comments even for friends).  But they are a gift to bloggers.

The Lentil Salad recipe is... here.

Disclaimer:  Most links to Amazon.com are Associate links.  I thank you.

Photo:  This has nothing to do with my blog post but isn't it pretty?  It is a vintage cranberry glass cake stand, one of my all time favorite Goodwill finds.  Just in time for Easter dinner!
Posted by Brenda@CoffeeTeaBooks at 12:58 PM

Thanks for all the great ideas. Think I'll freeze some homemade soup too. Come in handy for the summer when it's too hot to make it.

Your “almost title” could work for me as well as nothing much is getting accomplished here between the weather...rain every day and other goings on. This is where I remember FlyLady’s little encouragement: Even a little done imperfectly blesses your family/home.

I can not imagine that those freezer containers protect food, but if you are saying so... 😁

Here’s to a lovely spring and ongoing healing for your eyes. The Lord knows...

I LOVE quinoa! I have a friend that I had encouraged to try it who she said she didn't like it either ... then I asked if she had RINSED it first, and she had never heard of having to do that. So, if you haven't been rinsing the quinoa first before cooking, you probably won't like it, because there is a light coating on the outside that gives it a bitter taste. If you rinse it thoroughly, it takes the bitter taste away. It is SO good with sauteed garlic, olive oil, parmaesan cheese, etc. mixed in!! I love putting an over-easy egg on top of quinoa instead of hash browns. You can also purchase quinoa pre-rinsed, but most of the packages sold in stores have NOT been rinsed yet. Just a little FYI (-: -Joy

Please give quinoa one more try ... I think you would LOVE this salad: https://dontwastethecrumbs.com/2019/05/greek-quinoa-salad/
(Be sure to rinse the quinoa well first before cooking!)