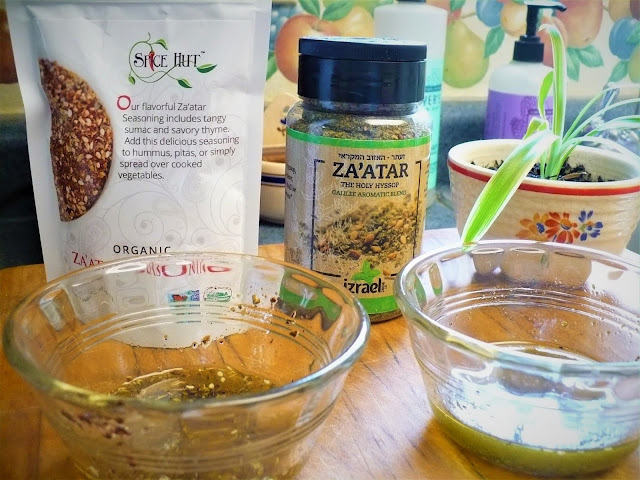 I hope you had a good Easter!  We enjoyed having our son's family and his in-laws here for Easter dinner.  I baked the ham and made a couple desserts and a side veggie and the rest of the dinner was brought in so it was an easy dinner and clean up.

It was finally good enough weather to get out in the garage and reorganize two sets of shelves.  One is where I keep a few small kitchen appliances and my "pantry" shelves for food and such.  After having lived with it a few months, I knew how I wanted to reorganize everything so once it was started, it didn't take all that long to make the changes.  It feels good to have the garage pantry organized again.

Karin mentioned in a Comment that I should try za'atar.  Actually, I had it on my wish list already and I had started researching it after learning different hummus recipes.  It was mentioned in one article that the reason hummus tasted difference in Israel than in the U. S. was the two different blends of za'atar.

Most American za'atar is made with thyme (and sometimes oregano) as leading ingredient/s.  While Israeli za'atar has hyssop (aka: wild thyme) as the main ingredient.  So I used Amazon credit (thank you!) to purchase one of each blend.

So far I have tried both in an olive oil dip, which is the way it is often served... and on tomatoes.  Using it in rice was another suggestion that I will try soon.  I'll also try it on store bought hummus and see how that tastes.  But I already like just regular sumac on hummus... we will see.

So, what were the results?  Well, when dipping Italian bread in two different mixtures... I was surprised to find I liked both.  A lot!  The version most often found outside of the Middle East (a version shown on the left above) created an olive oil dip similar to what I've had in Italian restaurants where the herb mix stays on the bottom of the bowl and when you dip your bread into it, you press on the mixture so it stays on the bread.  It was delicious.

However, the Israeli version flavored all the olive oil as well as settling to the bottom of the small bowl.  So you didn't have to dip your bread in completely to get the flavor.  It was also delicious but with a different taste.  It might be good in a salad dressing?

When sprinkled on tomatoes, I kind of liked the thyme/oregano blend better but just by a little bit.  Probably because I'm not used to hyssop on tomatoes?  To be honest, I think I'd like the tomatoes better with just some sea salt.

Oh, yes... there is such a thing as the poison sumac plant.  Obviously that cannot be used for anything to eat.  However, I have read about people making their own sumac from non-poison berries.

Two cookbooks I used in my research were Jerusalem (which I own in hardback) and Olives, Lemons, and Za'atar (which I bought for the Kindle).  The Kindle version of both of these cookbooks are very inexpensive, at least they were recently.

While I prefer hardback cookbooks, I do purchase Kindle versions on sale and find them easy to read, if not as easy to look up for specific recipes quickly. When purchased on sale for the Kindle, it is an inexpensive way to read through the information in an otherwise expensive cookbook.

Jerusalem was written in both a Jewish and Palestinian perspective since the two authors (who own at least one restaurant together) both grew up in Israel.  Olives, Lemons, and Za'atar is written by a New York chef and restaurant owner who comes from a Palestinian Christian family raised in Galilee.  The stories as well as the recipes are very enjoyable.

I also sought out a lot of websites online, none of which I thought to bookmark.  Sorry.

My decision about what za'atar to use?  I'd say both of them.  Thanks to Amazon, both are relatively inexpensive in the forms I bought and usually in stock.  I heard one had to special order Israeli za'atar from Israel at one time but Amazon now keeps the brand shown above in stock.  If you have been to Israel and want to recreate the flavors from your trip, you will definitely want the version with hyssop!

I do enjoy trying new herbs and spices.  It is usually an inexpensive way to travel the world without leaving home.  ;)

Note:  There are many other Middle Eastern cookbooks I want to try.  One is Julie Taboulie's cookbook from her delightful PBS show about Lebanese cooking... here.

Posted by Brenda@CoffeeTeaBooks at 1:31 PM

I have made a delicious bread with a thick layer of zaátar on it. A friend who owns a bakery told me about making it at the suggestion of one of his customers who is from the middle east. It is a great bread with soups in the winter time. Here is a link to an old blog post of mine where I mentioned how I make it.

You have a far more eclectic palate than I, Brenda. Will I ever try Za’atar? Not on purpose. 😉 Still this is interesting. There is an Italian restaurant here that serves warm breadsticks with dipping oil. To me the spices are merely an Italian seasonings packet. See how lacking I am and without a lick of desire to expand my horizons? The closest I come is to reading your discussions on food. I did try brisket tacos yesterday, which were very tasty.

My Easter was lovely with a wonderfully traditional meal served by my daughter-in-law.

I am much the same opinion as Vee. I have noticed that cooking magazines now feature lots of recipes with ingredients that I have never heard of? I like to try new recipes but I need to stick with things I know..not adventurous like you. Enjoyed reading about your ventures into the "unknown" world of food :). Blessings, Sharon D.

I thought you might enjoy za'atar. I first learned of it from Joanne Weir's cooking show that was aired on the San Francisco PBS station while I was living in the Bay Area. https://www.joanneweir.com/recipes/firsts/zaatar-spice-blend/