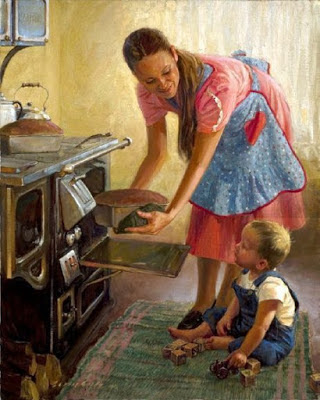 It is finally looking more like Spring here.  While the trees are still only budding, the grass is green and we are having more warm days than cold.  Winter definitely doesn't want to give up this year.  At least we don't have snow like our friends in the western states and those just north of us.

A few people have asked how I make cinnamon rolls from the bread machine dough.  This is the way I also made them when I used to mix and knead the dough myself.  I am sure there are many ways to prepare the cinnamon rolls but this is what I have tweaked over the years.

This seems like it would take awhile but it really doesn't, once the dough is ready.  I just want to make certain I get the details right so the description is quite wordy.

The dough cycle of the bread machine makes one loaf of bread or one half-sheet of cinnamon rolls.  I mentioned before that I recently realized why my cinnamon rolls were too small (aren't we always learning in the kitchen?).  It happened when my cinnamon rolls were rising a few weeks ago and I forgot about them.  They had been sitting on a half-sheet pan, covered with a thin tea towel for at least an hour.  They were much larger than I usually let them get and when they baked they were... the perfect size!!!  Lesson learned.  :)

So... make your favorite dough.  My bread machine dough recipe is... here.  I also have instructions on turning them into cinnamon rolls at the bottom of that recipe post.  Even when I tried to fix it, I couldn't get the paragraphs to separate so sorry for the jumbled look of that post. It was written back in 2007.

Make your dough and let it rise once.  If you are making it a day ahead and want it to rise overnight in the refrigerator, cover with plastic wrap and place in the frig with a plate on the bowl for a slow second rising.  Make sure the bowl is large enough for the dough to double in size.  The next day, roll out the dough per instructions below.

If you are making the cinnamon rolls immediately, make the dough and let it rise once.  It will have done this already in the bread machine.  Set the dough on a lightly flowered counter and press it into a rectangular shape.  Then let it rest about fifteen minutes.  Dough needs to rest a little or it will spring back.  You will know this already if you watch The Great British Baking Show!  ;)  (If it set in the frig overnight, you may not need to let it rest.)

Then roll the dough out as thin as you can get it, usually 1/4" or so, if it springs back again then let it rest a little longer.  You want the wide side of the rectangle nearest you for proper rolling and cutting.  Melt a few tablespoons of butter and brush it on the dough, leaving about an inch free of butter at the bottom of the rectangle so it will seal better.

Sprinkle cinnamon on the buttered dough to taste, I like cinnamon but some people don't so it is up to you how thick it goes on.  I get all messy and rub the cinnamon into the butter until all of the dough has cinnamon/butter on the surface... except that inch at the bottom of the rectangle!

Sprinkle brown sugar over the dough until you get the amount you want.  You can also use white sugar or raw sugar but I do like the flavor that brown sugar gives it.  Press sugar into the dough to help it not fall out.

Pinch together the dough that has come apart in the slices and place them on a greased half sheet pan or cookie sheet (I use parchment paper).  Cover with a light dish towel or tea towel, cotton or linen but not terry cloth... and let rise until double.  This could take an hour, especially in winter.

Bake at 350 for 12 - 15 minutes, you do want them to be well baked but not burned at all.  Obviously.  Take them out of the oven and if desired, transfer to a cooling rack.  I have left them on the baking sheet to cool before, too.

When cool or just a little bit warm (not hot), ice with your favorite icing if desired.  For many years, I craved the cinnamon rolls my parents purchased when I was a child.  There was something about them that I couldn't replicate in my own recipes.  Until I looked at the cinnamon roll icing recipe that was used in an Amish restaurant and I noticed something different about it.

When I made that recipe, it was a lot like what I remembered from childhood!!!  They had a high amount of butter ratio to the confectioners sugar (icing sugar).  It made for a less sweet icing, albeit probably more calories but I mean really... yum.

I have the icing recipe on the cinnamon roll post, too, but it is basically:
I use this same recipe for cakes using more confectioners sugar and I use it as a thick glaze over some bundt cakes.  You don't need vanilla in the icing but you can add it if you want.  You can also add maple extract to make it more of a maple cinnamon roll icing.

I hope this answers the questions.  If I left anything out, just let me know in Comments!

Once again, the original bread machine bread recipe is... here.

Disclaimer:  Most links to Amazon.com are Associate links.
Image:  Fresh Bread by Loren Entz
Posted by Brenda@CoffeeTeaBooks at 12:23 PM

Oh this does sound so good. I have about as much energy as a rock so probably will pass. Perhaps one day when I really want to impress the boys. ☺

Did you read my mind? I had been trying to think of a Sunday morning breakfast that could be ready quickly and that will get the kids interested in eating early. This is perfect!


I am thinking would it work to prepare the rolls then let the second rise happen in the fridge?

If so, would you still cover with a towel or with plastic wrap? I am thinking it would be nice to be able to take from the fridge and bake while I am getting the Littles dressed.