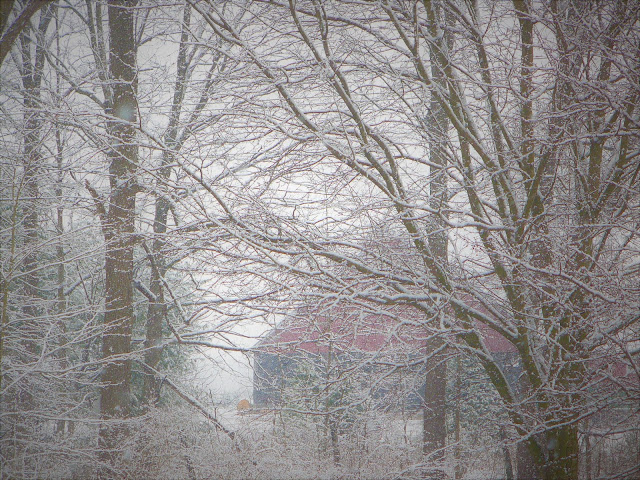 When I first looked outside this morning, walking through the living room with a brief glance at the picture window, I had to stop and gaze upon the scene.  There had been a forecast for a "dusting of snow" but apparently, our area received far more than expected.  It honestly did look like Narnia.

If this was a blizzard, I would not have been happy at all.  But the snow was falling with the largest and fluffiest flakes, settling so gently on the forest that everything appeared dressed in the purest of white.  After a cup of coffee to awaken the senses enough that I dared walk outside, I stood on the porch with my ancient camera and snapped away at the surrounding beauty.

Such a snow in true winter would be expected to stick around for awhile.  This snow would be melted by noon. Spring snows remind us of the brevity of life, that if one wants a photo of the beauty then they had better slip on their wellies and a knitted hat to take the photo from the front porch immediately.

If I were a true photographer, I would have walked the gravel lane to the county road but as I had not sipped a second cup of coffee and wasn't fully awake, I figured the photo taken from the front porch with a zoom lens would do nicely.  My body has not adjusted to the time change, yet.  Sigh...

I wish you could have seen the other glimpses of red in the falling snow.  The cardinals in our backyard seem to preen in snow, as if they understand how it shows off their beautiful red feathers.

One bird in particular sat on a high branch in the bushes that divide our back yard from our neighbor's, as if he was waiting for our applause. It is our neighbor who treks out in all kinds of winter weather to toss seed below the bushes.  We thank him every once in awhile since these bushes are in our line of sight from the kitchen window.

My husband walked into the kitchen as I was admiring the beauty, I told him to look out the window quickly.  There may not be any more glimpses of red feathers against the white snow for months upon months.  Which is fine, I am ready for chubby robins and daffodils and the blooming of the crab apple tree.

I must admit that there is one part of the winter season that I will miss when the sun doesn't set until well after 9:00 by the end of spring.  That is the joy of popping a DVD in the player and watching a movie or TV show with a throw over me and a cat beside me.

My daughter and I were in agreement when she lived at home that some movies and shows had to be watched with a particular atmosphere in place.  For instance, Casablanca had to be watched when it was a dark and rainy day, a thundershower would be perfect.  A snowstorm would provide a close second in "atmosphere".

I will miss the dark winter "atmosphere" for watching favorite DVDs, especially knowing my affection for broody British murder shows.  They are so good at taking my mind off of my own problems (when well written).

Currently, I have been making my way through a set of Midsomer Murders mysteries titled Barnaby's Casebook.  I rediscovered Midsomer Murders a few months ago and as I watched the early episodes, I vaguely remembered seeing them in the late 1990s on A&E.  They hadn't been broadcast anywhere I live since that time (that I know about) until Ovation starting playing two episodes each week.

The concept for the show and the first five episodes, now playing for twenty years in Great Britain, are based on the novels by Caroline Graham.  If anyone had told me I would enjoy a show set in beautiful English surroundings in the mythical county of Midsomer, I'd believe it.  But Midsomer is not your usual county.

So much murder happens there that in the early seasons, when Inspector Barnaby and his wife are looking for a new home, he told her it is safer in the city.  Behind the beautiful homes and the polite upper crust people, there lurks one or two or more murders each episode.  It is often compared to Cabot Cove in Murder She Wrote.  There are no CSI closeup murders here but one quickly realizes residents of Midsomer country are all a little... wonky.

I hear the many episodes that starred John Nettles are the best but later episodes are good.  I am watching the boxed set a little at a time but many libraries have the DVDs and many of the seasons are on Netflix.  They are much tamer than other favorite British murder mysteries but my husband thinks they are weirder because of the psychological drama.  He may have a point there.  I think he is just worried that I'm taking notes while watching all these mysteries.  ;)

Such are my ponderings as it snows outside.  Perhaps sunnier and warmer days will bring a desire for lighter entertainment?  We'll see... maybe a Haley Mills marathon?

Disclaimer:  Most links to Amazon.com are Associate links.
Posted by Brenda@CoffeeTeaBooks at 7:31 PM

Your snow and the Cardinal sound lovely. We sadly don't get Cardinals here in So Cal. But, we did in Oklahoma (where I grew up)...and Robins.
DH and I used to l-o-v-e watching Midsomer Murder Mysteries! Yes, the first years were the best, imho. Barnaby and his sidekick had a teasing back-and-forth that i so enjoyed.
Have you watched Inspector Morse and Endeavour? And Inspector Frost (Netflix)? We enjoyed these, too.

March snow is usually doesn’t last long. I bet the cardinals were so pretty in the snow.

Tim and I are enjoying Vera. We’ve never watched Midsomer but maybe we’ll move on to that when we finish Vera.

I am so glad you were able to enjoy the beauty of the snow with bits of red and cardinal.......Still, I must admit I'm longing for spring and summer and thrilled that my snowdrops are in bloom, even though the days are not that warm.

I am a Midsommer Murder fan, too. I don't like dark mystery shows too much...I like David Suchet's Poirot and Joan Hixson's Miss Marple mysteries........And I always love seeing the beautiful English countryside.

Haley Mills marathon?😁 That’s funny! Such a beautiful moment you captured. Very glad to know that the snow was gone by noon. We had a quick thaw for a few days and my basement flooded because the thaw was not enough to free the ice in the out-take hose. It has been both a messy weekend and an expensive one. It is always something. Always. I can’t wait for spring days!

The picture of the barn through the snow-covered trees is beautiful. I, too, am a great fan of Midsomer Murders. I've been re-watching them on Netflix. The British shows are so well made and enjoyable.