Living the Pantry Lifestyle - Some more of my favorite things 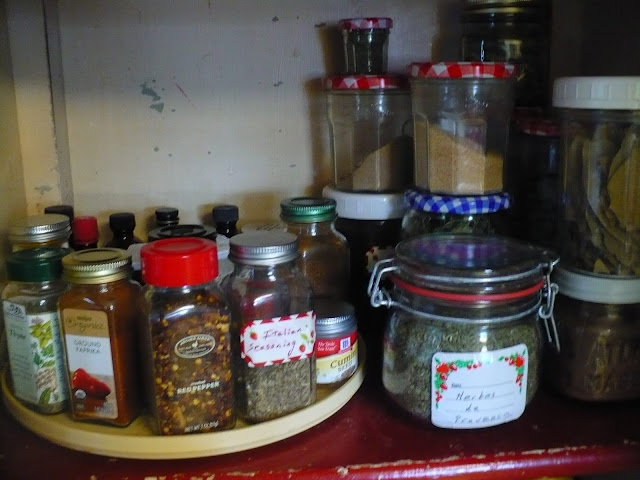 I appreciated the Comments from last week's post.  I completely forgot my 12" Lodge cast iron skillet.  I bought it the year we went to Colonial Williamsburg to make the cornbread recipe I brought home.  I also use it for those rare times I make my mother's fried chicken recipe and when a recipe calls for a cast iron skillet.

I have a smaller vintage iron skillet that I don't use often so I pulled it out of the cabinet and sure enough... it was exactly as they said... thinner, lighter, and with straighter sides.  All the skillets work great when properly taken care of but the lighter weight of the vintage cast iron skillets has me thinking I should have checked into them the times my daughter and I went to Brimfield.

I have one other pricey favorite thing to share before moving on to much less expensive food items.  When I was in my early 30s, I had the opportunity to purchase either a Cuisinart food processor or a Kitchen Aid stand mixer.  At the time, I didn't bake very much so I chose the Cuisinart, which gave me about twenty years of good service.  It fit the style of cooking I did at that time.

Then about eighteen (or so) years ago, Kitchen Aid had a great price on their Professional series stand mixers.  I was doing a lot of baking and at the time I could afford the sale price, since then the red stand mixer has been one of my very special things in the kitchen.

If you have never owned a very good stand mixer, it makes baking so much quicker and easier.  That's how I can still bake cookies and such for Holiday gifts.  The only thing I no longer use it for is making bread, just due to decreasing energy.  For that, the bread machine gifted to me by a dear friend has made all the difference... and is one of my favorite things in the kitchen.  I use the dough cycle a couple times a week.

Having said that, a lot of my favorite things are inexpensive ways to add flavor by using spices, herbs, and condiments.  Many of them have been talked about here before and I will only provide a link to Amazon to give information when I think it is needed.  Otherwise, most items are available at the grocery store and often much cheaper.

First, the condiments I love.  In the interest of keeping this somewhat shorter, I won't mention the obvious things like Hellman's mayo.  Hmmm... I guess I did just mention it.

However, there are some items I added in the last few years.  Probably the most unusual (for me) was the addition of Sriracha hot chili sauce.  I get the brand with the rooster on it.  I don't like foods that are too hot but I do like a little heat.  My husband likes... no heat at all.

I have found Sriracha makes it easy to add a little heat to smaller servings without adding it to the entire dish.  For instance, I add a little Sriracha to my goulash serving and not to the entire skillet.  I like a little Sriracha over my scrambled eggs.  One "recipe" I use it in for both of us is when I make crustless quiche, just the tiniest couple of drops in the mixture adds flavor and not too much heat.

Red pepper flakes provide the same little bit of heat and flavor, added to the oil with spices to flavor the oil before going on with the rest of the cooking.  Just the tiniest pinch is all that is needed.  If I'm making a recipe just for me, I'll add a little more but even I can't handle too much heat.  No wonder it is used so much in Italian, Spanish, etc. cooking.

Speaking of oil, do you remember The Frugal Gourmet?  He always said, "Hot wok, cold oil"?  I still remember that and now always heat the skillet before adding the oil (or a mixture of oil and butter).  But I digress...

I bought a small container of Carlini Extra Virgin Olive Oil with Chile and Garlic at Aldi's a couple months ago.  I usually toss "sliced or cubed" root veggies with California Olive Ranch Everyday Extra Virgin Olive Oil (another kitchen favorite) before putting them on a parchment lined half sheet to roast them.

I gave the Carlini oil a try one time, tossing the root veggies in a bowl with it instead of olive oil before placing them on the sheet pan, and it worked great, just the slightest heat and great flavor.  It worked with potatoes, sweet potatoes, carrots, and butternut squash.

Another spice (mixture) that I don't use a lot but I find essential is Tajin.  I had been given a couple small sample jars at one time and found I liked the spice mixture.  I think I found mine in the section of the grocery store that sold Spanish and Mexican foods.

I need to research ways to use it even more but my very favorite is how Nigella Lawson uses it... on melons.  I sprinkled it on watermelon last summer for the first time and used it each serving of watermelon after that.  It is another way to add a the tiniest bit of heat and flavor to individual servings.

A spice I have come to love and research ways to use it is sumac.  This citrus tasting spice from the Middle East is now showing up in more cooking shows.  Just recently, a Milk Street episode on PBS was all about using sumac.

I first tried it without realizing what it was.  I thought it was paprika sprinkled on the hummus my son and I enjoyed at a favorite restaurant near campus when he was in college.  Then I found out it was sumac!  Yum.

I bought a bag at the local Asian grocery store, which I'm still using today.  It is one of those spices that do not seem to lose their flavor when ground.  I do plan to replace that this summer since it has been in the pantry a long time.  I have used it when making homemade hummus and a summer favorite - Jerusalem Salad.  I have also seen it added to a basic lemon and oil salad dressing.

This is getting quite long so I'll continue with more "favorite things" next week.

Some Items Mentioned in this Post
Sriracha... here.
Tajin seasoning... here.
Sumac... here. (This is a much smaller container than the bag I bought, good for trying it.)

If you have any specific questions, just leave them in Comments and I will answer them next week.  I think most other food items should be available at the grocery store.  Sriracha and Tajin are also available in my store but I live in an area with a lot of Spanish, Hispanic, and Asian people.

I apologize for any typos, my right eye has been giving me trouble today.  ;(

Image:  One shelf in my vintage (antique?) chimney style cabinet.
Posted by Brenda@CoffeeTeaBooks at 3:16 PM

IdI love to know more about your break machine. I have acquired a couple from Goodwill and never enjoyed the flavor of the bread. I don't know if it was user error or the machine.

Have you ever tried using Za'atar spice? It is a blend that includes sumac. You can make the blend yourself using your own herbs and spices.

I’ve never really cooked with cast iron but I’d like to try one. I may keep my eyes out for a vintage one for the reasons you spoke of. I love my Kitchen Aid stand mixer! It works great at shredding cooked chicken, as well as baking!

I love a bit of heat in my food, too!

Cast iron is often used whenever I am serious about cornbread or frying a steak. I do have a cast iron dutch oven that I use for stews or PW’s roast.

If this is my second comment, feel free to delete. I remember reading last night, but may have taken off on a link and forgotten to return. You have piqued my interest in a few things once again, specifically, the spice sumac.

Hope that your eye is doing better today. Praying...

My favorite cast iron skillets all came from my mom, and all were probably purchased in the 40"s and early 50's. One, I think, may have even been my grandmother's!! They are far superior to the newer ones.

Hmmm, now I have to investigate if I can just use the sumac that grows around here , it makes a refreshing lemony drink ..wonder if the dry "berry type things" can just be ground up and used. Guess I'll find out next August when they are ripe !

Tajin on cucumber slices is one of the best summer snacks!

I don't bake but my daughter whom is now 14 loves it. She really wanted a stand mixer for her 14th birthday. Of course they were expensive but still the shell was made of plastic for the cheapest she was interested in. My husband came with me to search them out and wasn't very impressed with the quality. He did realise though, the store we were in, we could purchase gift cards through airline points. (he travels all the time for work however we don't earn enough points for a family of five to travel on those points). So my daughter ended up with Kitchenaid mixer free of charge! She was so excited as she never dreamt we would purchase one for her. We had to tell her that we didn't actually pay for it as we didn't want her assuming she may be entitled to a birthday present in the future for this amount - hehe. She calls it 'her baby'.