Living the Pantry Lifestyle - The Pantry in Winter 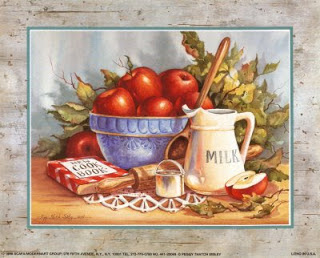 Sometimes I need to remember that the original purpose of keeping a pantry by our ancestors was for surviving the winter months when fresh food was unavailable.  Except for the occasional hunting trip, they depended on what they had put up, dried, smoked, etc. for what they ate during the season.

I finally did get out yesterday and that was because I needed a prescription... and after my husband had already run some errands and assured me the roads were not icy.  I admit to being skeptical as his idea of clear roads and mine are not always the same. He is judging clear by January standards while I prefer July clear.

I was reminded of all of this when I arrived home from that grocery run only to realize I had forgotten an item I needed that was on the list.  Although I didn't forget the most important items like coffee.  You can tell how cold it is by how fast we go through hot beverages each week.  We had already used all the coffee I had purchased on my stock up grocery trip at the beginning of the month.

So this week, I pulled out the tablet that I brainstorm with (a simple Mead lined tablet) and wrote down the five meals made the most often in cold weather cooking.  There is a variance in a couple but the ingredients are similar (and that is what counts).  For instance, instead of a specific casserole I write "ground beef casserole" or "chicken casserole".

My January list is quite different than my July list as it contains at least one homemade soup.   I also use the oven a lot more in winter so there are casseroles, roasted chicken (which becomes soup the next day), and roasted root veggies.  In July there are more sandwiches and salads.

The other difference for winter is that I bake more.  Since I have a bread machine again, I've been using the dough cycle a lot, mostly for loaves of bread to bake in the oven but I made my first batch of cinnamon rolls last week.  The dough cycle doesn't make a lot of cinnamon roll dough, which is good as I have no self control when it comes to staying away from them.

Now that the pantry shelves in the garage are all cleaned and ready for use, I can stock up again on items like, pasta, flour, and various kinds of sugar.  I don't use a lot of sugar so I still had a lot of regular white sugar in a large canister, it lasts a very long time. I leave other items in their original bag or box and store them in Rubbermaid style containers so as not to attract varmints.  Lesson learned!

Oh, it was one of the items I usually keep well stocked that I forgot to purchase yesterday... confectioners sugar.  I don't use it as much as I once did so it took awhile to use up my stash and thus... it is not on my usual radar of things to get at a quick trip grocery store run.

So, has my five meal brainstorming helped?  Absolutely!  I should have done it in December.  Now when I make my stock up list, there are items that I don't have already which will be added to the kitchen and garage pantry shelves.  If I have the ingredients for five meals in the freezer and pantry, then it can snow and unless I have an appointment... I can stay inside where it is warm and safe from ice.

One of my go-to ground beef casseroles is Holiday Spaghetti so I make certain I have a large can of mushrooms stems and pieces on the shelf (I do like fresh mushrooms but canned is a close second in a casserole) and either fresh or frozen green peppers.  I always have cheese on hand and spaghetti and canned tomatoes for this and other casseroles.

When whole chickens, chicken legs, or chicken thighs are on a stock up sale, they go in the freezer for meals and soup.  (I'm not going to let losing so many items in the deep freeze keep me from using the freezer again.)  I bought an extra ham at the Christmas sale prices and it is in the freezer but I also purchased one a week ago when I noticed there were a few left at 79 cents a pound.

I didn't freeze it but instead I roasted it and we had ham for a couple meals, I froze a lot of ham slices, and I froze the ham bone with some meat on it for soup later.  There is a small Ziploc bag in the frig with a few leftover ham chunks in it, ready to go in a crustless quiche this week.

I think I was delayed in the winter pantry mode because of our unusually warm December.  Then winter hit seemingly overnight and has not let up since.  It's a good thing we do not depend on being all stocked up before the freezing temps hit as our ancestors had to do.  For me, having a good pantry means convenience, the ability to stay at home in bad weather, and helping keep the food budget down.  For them it was survival.

If you haven't written down five go-to meals (more or less) to stock the pantry, it honestly helps focus the budget and what you stock in your pantry for cold weather cooking.  I must admit to gazing at the flowers and such on Instagram, posted by those of  you who are south of the equator.  They are but a distant memory in a Midwestern winter.  But spring will return so I had better make the most of these cozy hibernating days of soup, hot beverages, and books.

Speaking of books, I had mentioned that I bought a copy of the wonderful cookbook Salt, Fat, Acid, Heat for one of my son's Christmas gifts. It is one of those cookbooks I think everyone should have on their shelves.  I liked it so much, I was tempted to keep it (but I didn't).  A lovely blog friend sent me an Amazon gift card email to cover the cost of buying one for myself (thank you!).

It took awhile to arrive since the book had become very popular so it was on back order.  (The author had been a guest on multiple TV shows.)  I eventually received my own copy and it is enjoyable just keeping it on the coffee table to read for right now.  It is a treat for the visual learner like me who learns best by what I can see (and then do).

I also have begun watching the Netflix episodes by the same name again (my son gifted me with the app for my birthday last year).  I think they are more enjoyable the second time around.

Since I forgot the confectioners sugar, I can't make what I had intended this weekend so instead I am going to bake two loaves of orange cranberry bread (my recipe makes two loaves, one for now and one for the freezer).  That is what a pantry can do... provide options!  ;)

Disclaimer:  Most links to Amazon.com are Associate links.  I thank you!
Image:  Cookbook and Apples
Posted by Brenda@CoffeeTeaBooks at 11:21 AM

Ahhh, point taken. I need to get “Salt Fat Acid Heat” off the shelf. I grinned at the difference between a January clear driving day and a July one. I am always astonished by how bad the roads are no matter how approved they are by others. My daughter sent me a message warning about a pot hole the size of a small country just down the road. It apparently has meant popped tires and cracked axels for some. Oh dear! Awful.

Stay cozy and send Mr. Coffee for staples or would that not be wise? 😊

I did the same kind of stock up with turkeys after Thanksgiving! 59 cents a pound! I hate when I forget something on my list, I love having extras and staple items in my pantry. In Little House in the Big Woods, Laura Ingalls Wilder gives a good idea of the work they put into stocking food up for the winter! Plus they had to eat a lot more seasonally.

I loved Little House In the Big Woods too and they did all that work stocking up without running water, electricity or even a decent stove. Can you imagine?

I haven’t done it myself but I’ve read you can make your own confectioners sugar by putting regular white sugar in your blender until you have the right consistency. On the same order as making your own brown sugar with granulated sugar and molasses.