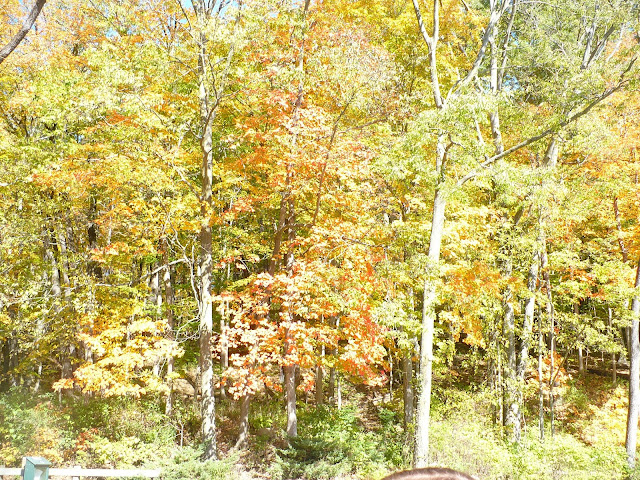 The experts said it may not happen this year.  After all, due to weather conditions there were many trees whose leaves had turned brown and fallen to the ground without any color.  It looked like if there was any True Autumn, it would be muted at best and brown at worst.

Then it happened.  Suddenly!  The world outside my door was ablaze in glorious color.  There was nothing muted about these colors at all. Breathtaking color.  Color where the leaves appeared illuminated by the sun's light as it traveled to Earth.  Jewel tone colors as one would find in the finest of stained glass windows.

Thus began The Beautiful Week that I wrote about last Sunday.

There was a day that I was driving on the narrow road which winds through the forest until it reaches the By-Pass.  I felt as if I had suddenly traveled to another world, one where the trees were dressed in beautiful jewels and one could walk through the woods and pick a ruby or an emerald or a topaz or a sapphire... as we would reach for an apple in this world.

It was on this two mile stretch of road, on the way to the grocery store, that I felt God was showing me a Truth.  One of such importance that it was embedded in my soul that moment.  A Truth I needed right then.  He said, in that Still Small Voice, that I was never to give up expecting the magic.  Narnia magic.  Godly magic... not the false stuff the world can only provide.

It has been a hard year, one in which there were days I doubted I could make it through the next twenty-four hours.  However, I knew He was there.  I saw His presence not so much in the Big Stuff but all the little ways that... in the midst of large trials... He gave a cold drink of water.

All of us have to be reminded that, should we expect perfection here, we will be disappointed.  Sometimes there are miraculous answers to prayers such as a financial need met or a job offer from an unexpected source.  There are times the answer to prayers is played out slowly.  Like my right eye slowly healing.  There are other answers that have not been met in which we may only realize fulfillment when we meet Him face to face.

However, the (Narnia) magic is still there in the same way the forest came alive for those days in late October.  We cannot look at God's answers in our life through the lens of this world.  So many times that it seemed as if God wasn't listening, He was actually answering our prayers in such a way that we didn't see it as the answer.

Perhaps years later we will recognize it as such but so often I think we don't.  We are expecting our answer to prayer to look like one thing while He gives it in another form.  He doesn't take us out of the storm but leads us through it.  He has us adopt instead of conceiving a child.  He provides for the day instead of the year.

The difficult people remain in our life but He gives grace... for us to show grace.  The illness we didn't want leads us to meet people that He ordained for us to reach.  The job loss occurs and we have to move when we don't want to but He knows it is to the town where our further destiny awaits.

I always remember each Autumn that the color is in most of the leaves all Summer.  The magic is hidden by the chlorophyll laden shades of green needed to absorb the seasonal light.  Light for growing.  Light for living.  When Winter is just around the corner, the trees shed their green and display the glory that was there all the time.

Since driving through the forest that day, I have been reminded that... in my days and your days and our days... His glory is always present.  It may not be obvious but it is still there.  My prayer that day was that I didn't forget that Truth.  My prayer included not growing weary in waiting... for answers to prayer but also for His coming.

How many scoffers there are that say the Church has been expecting His coming for two thousands years and it hasn't happened, yet.  Well, someday... even when some self proclaimed experts have said it won't happen... He will appear in all His glory just like the the forest changed this season... and that, my friends, will last not for a week in Autumn but for all Eternity.

I could hear the wind and the rain last night and knew without looking that there would more leaves carpeting the ground today.  It won't be long before the trees become bare forms of architecture in the snow, having their own kind of Beauty in that season but no sign of color.

That is the way it is suppose to be as one season progresses into another... but how like our amazing Creator that He provided one short season of blazing jewel-like magic before the cold sets in.  I don't know about you but that speaks so much about His love for us as we go about our days in this imperfect world.

Mentioned in this Blog Post
Last week's Sunday Tea Post called The Beautiful Week... here.
Posted by Brenda@CoffeeTeaBooks at 10:16 AM

And again you have written such beautiful words. Our world is not perfect but we're not home yet, and He is faithful. Blessings, Sharon D.

"Well, someday... even when some self proclaimed experts have said it won't happen... He will appear in all His glory..."

What a wonderful post! Yes, the leaves have been glorious this year, a majestic reminder of the beautiful creation of God. I am encouraged by your post of "He doesn't lead us out of the storm, but takes us through it." A beautiful reminder of His presence always with us.

Beautifully said, Brenda! I do love how you write.

I so enjoyed reading your post here at the close of my Sunday. We just witnessed a wealth of autumn splender on a short trip we took last week, so your words triggered a happy remembrance of those scenes. Maranatha!

So much truth... (I was pretty sure that color was coming as it was delayed here, but arrived. We are still blessed to have vivid color here and there.) Now to remember these things when it is gray February with no end in sight.

Beautifully written and inspiring. I have felt for the longest time that our prayers are answered in the most unexpected ways.

I love this. It resonates.

This is beautiful! Full of beauty and truth. God is always there, working for our good, even when it doesn't seem like it. He is good, full of mercy abounding in GRACE!

This paragraph . . .
Since driving through the forest that day, I have been reminded that... in my days and your days and our days... His glory is always present. It may not be obvious but it is still there. My prayer that day was that I didn't forget that Truth. My prayer included not growing weary in waiting... for answers to prayer but also for His coming.

Oh, and that reminder not to grow wearing in waiting for His coming! Amen!