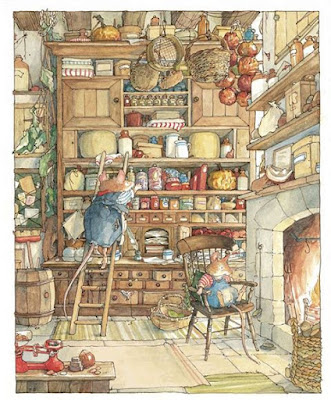 It is hot, very hot where I live today.  We have been hovering on or near record highs all "spring". At least since the near record lows and snow left.  I walked out to the newspaper "mailbox" to get the morning paper and it felt as one were walking through a cloud of moisture.

I was hoping to work in the garage but that won't happen until it cools down.  Earlier this week, the woman who cleaned my front porch spent a couple hours taking bleach water to the shelves in the garage that were affected by mouse infestation (which was most of them) and then teaching me how and where mice can infiltrate a garage or home.

I am very sensitive to bleach, I don't even use it in my laundry.  Even though I wasn't in the garage during the bleaching process, my eyes were watering in the Study.  However, it was necessary.

I knew food left out can attract rodents, including pet food in bags.  I actually heard one or more mice eating in the large bag of kibble one time. We also had some bags of beans sitting in a box and they had eaten most of them before we realized it.  They also ate through everything that came in a box that was not in Rubbermaid or a food grade plastic pail.

So I had already protected any such food items.  However, we also had to get rid of all cardboard, cloth, etc. that had been stored in the garage because they can use it for nesting.  I had already thrown away the bag that held my gift bags and small wrapping paper because they had eaten through it.  It is no longer stored in the garage.  (Thankfully, most of our Christmas items where that was located are stored in Rubbermaid style containers.)

We had also already thrown away a lot of canned food because once they urinate on the top of the cans, it rusts quickly and you cannot use it.  At least it was easy to tell where the mice had been.

We even had to throw away a small bookshelf because it was permeated with the aroma of rodents and that will attract them back to the garage.  (Which is why she had to use bleach water on our shelves.) She showed me where they had created a couple holes in the walls of the garage, which is probably how they got in even though I had checked for spaces near the floor.

If you are shivering right now... welcome to the club.  We started out with just a few field mice in the garage and quickly had dozens.

She worked a couple hours to get the shelves ready for me and since then I had to start washing everything that was on the shelves (including my entire collection of used and vintage canning jars).  I had planned to do more of that this weekend but the humidity in the garage is oppressive.

We received a rebate on the dryer we purchased and part of it went to stocking up on mouse "traps".  The kind that are sticky so the mice walk on them and cannot get off.  Half of them are now in the garage and she suggested putting a few in the house.

Although one of the benefits of always having at least one cat is that I have never seen a mouse actually in the house.  They had no idea that Victoria would have just stared at them.  Florentine, on the other hand, is the kind of kitty that would play with them and then chow down.  (Ugh.)

Another thing she told me (she is a professional cleaner by the way), is that they do not like open spaces so to try to have has few places for them to hide as possible. Which, I'm hoping... will cure my husband of his hoarding of rags, cardboard boxes, etc. in the garage.

I already had some Rubbermaid containers that I had used off and on for things like boxes of pasta and bags of rice.  It would be a good idea to put extra canned foods in them, too, even those items that mice cannot eat through but they can still destroy.  However, she also said that mice will rarely bother shelves that people use all the time.

I have always used a garage or basement as extra pantry storage space and I've never had anything like this happen before.  However, if it is going to happen, it was good that it did so when we didn't absolutely have to depend on that food for an emergency.

It will take awhile before everything gets absolutely clean again but we have come a long way.  Now I think about the consequences of anything I store in the garage.  All items are too expensive to have to throw away.  Not to mention the creepy factor of knowing there are rodents in the garage.

Image:  Brambly Hedge (I now prefer mice only with cute overalls and pinafores.)
Posted by Brenda@CoffeeTeaBooks at 11:07 AM

Funny you should mention that...

I hate mice- except Bramley Hedge type. A lot of boxes in our garage went to trash too. I hope people will remember to wear mask when they work with mice stuff- not good for your respiratory system.

I'm so sorry. Not what you needed to be dealing with at this time. I'm glad that you
had someone to help with the cleaning. Hopefully the mice have moved out now.
Thanks for the tips. They are good to know.

We never kept our pantry in the garage because the winters are so cold here the stuff might freeze. Instead it's kept in some rubbermaid containers stacked in a corner. Stores a surprising amount of stuff and doesn't take up much space. Since it's in the house the mice shouldn't get it.

We get mice in the house on occasion- we see what they’ve left behind. Our current cat is a good hunter so we’ve not had that issue too much, but I should check the shop because we have rags and boxes etc, in that space.

Oh dear! Let’s see...the pests most plaguing me are ants, but I think that I have that under control. I also have a raccoon visiting the yard. I have spread raccoon deterrent around the perimeter of my property.

We can’t store foodstuffs in our garages because they are usually not heated and it gets mighty cold. This is good advice for basements.

John made the horrible mistake of using waxed meatboxes (he thought that they were clean) in his barn. Nightmare! They attracted so many rodents.

Glad that the worst is behind you and that you had good, knowledgeable help.

Oh dear, those sticky mouse traps. Better to stay with regular spring traps which are less of a lingering painful death for the rodents. Janeen

Brenda, don't depend on plastic containers to keep determined mice or rats out. One ate right into a new jar of Costco peanut butter! It was on a shelf by itself though..not in a box too. The boxes might not be perfect but you can only do what you can. I use the boxes too. It also keeps the cans clean as you just have to clean the container lid and not all the can lids. :)

Our garage is way too hot to store anything eatable. We could in the winter some but even then temperatures can go up for a couple days. Our little freezer is in there cause there is no where else for it to be but it would be better inside the house. I have plastic boxes under one bed. I'd rather have nothing under there but so far we need this space for the food. I sure hate getting those little nasties. !! Everything might have to have a home but I wish they would keep theirs our of ours!!!! :-)))) Sarah

What a blessing to have such knowledge able help AND to have this behind you! Live and learn, huh?!?

What a blessing to have such knowledge able help AND to have this behind you! Live and learn, huh?!?

I have dealt with mice in the house this year and I have only ever had one before this year. I remember reading something about the weather last year would make this year a bad one and I believe it. I hate them and I hate cleaning after them!

I'm so sorry about your mouse issue! We have been trying to eradicate either bats or squirrels in our ceiling - not a fun job. Thankful you have help to get things back in order. We, too, were dealing with some pretty hot days here last week - now it's rain, and lots of it! We live on a river, and our dock went missing in action - either floated away, or submerged deeply enuf that it can't be seen. Crazy weather! God's Blessings to you and yours... LynneinWI

I have heard that mice/rats do not like the smell of mint. So I put fresh mint in the pantry. It helps it smell nice anyway. Not sure if it really works, but it make me "feel" better about things anyway.