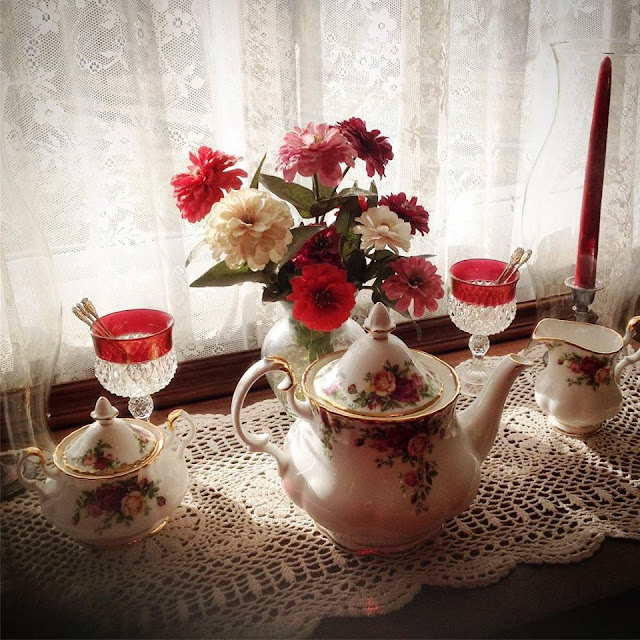 It all started when I was perusing a few friend's blogs this spring.  There was such beauty as each friend was involved in the making of Art.  There was flower arranging for a wedding, making pretty food for a shower, water color painting of flowers, seasonal decorating of the homes, and other ways to bring beauty to their world.

It reminded me of the old saying one doesn't hear these days... the addition of a woman's touch to a home or surroundings.  Perhaps it is no longer correct in today's society to say that women (as a gender) tend to care more about beauty than men but I have found it to be true.  I don't know many male dorm rooms with the first daffodils of spring in a vase on the desk.

The phrase always reminds me of the old Doris Day movie called Calamity Jane.  There is a scene where the new singer in town moves in with Calamity (Doris) and turns her bleak, dingy cabin into a thing of beauty by adding what she called "a woman's touch"... little bits and pieces of pretty here and there.  That change in Calamity's home sparked a change in her, too.  A softening so to speak.

I love the story of how Afternoon Tea came about as (allegedly) a Duchess needed refreshment in late afternoon because dinners were served so late so she began to take time for tea and snacks at 4:00.  Thus was the genesis of what we call Afternoon Tea today.

While it may have had a simple and solitary beginning, soon other women were partaking of the snacks by dressing up and getting together with dainty food and pretty china.  Now, that was a very good idea.

My Happy Place is when the morning pot of coffee has been poured into a favorite mug with maple sugar and half & half added.  I sit in the recliner and slowly sip what has to be one of the greatest gifts God gave to man... coffee.

Having said that... I also like a cup of tea in the afternoon.  It must be the English in my DNA.  Normally I just run water through the Keurig machine and add a tea bag to a favorite cup.  This tea time is more of a quick pick me up while taking a break from housework or working on the computer.

However, once in awhile, I need to make my tea break pretty.  Especially if there is time to put the kettle on and brew tea in a teapot instead of dropping a tea bag in a mug.  I dust off a teacup from my collection or I use the "go to" tea cup and saucer kept with the mugs in the kitchen.  If I have planned ahead, there will be a couple cookies or a small slice of cake for a special treat.

In this case, it is not necessarily a women's tea break for if my husband learns I'm making a real pot of tea, I must make it in the larger yellow teapot instead of the smaller two cup pot, both of which reside on top of the microwave in the kitchen.  Especially if there are cookies or cake involved.

I appreciate the rough and tumble males of the world.  My admiration for cowboys is known by my use of Amarillo By Morning as the ringtone on my first cell phone. I can watch football with my guys while enjoying hot dogs and I have a fairly good understanding of the game. There is definitely a special place for the men in my life... my husband, son, and two very special grandsons.

However, since today is Mother's Day... I think it okay to give a special nod to the beauty that women bring to the world and to my own life.  I was blessed with a good relationship with my mother, a daughter whom I admire as well as love, and a daughter-in-law who is delightful.  Not to mention four granddaughters who already love tea time and pretty things... even the youngest, Piper.

I do hope at least part of my legacy will be that I encouraged the women coming after me to seek Beauty in each day God gives them.. and to enjoy being a girl.
Posted by Brenda@CoffeeTeaBooks at 2:41 PM

Love this. So special that your granddaughters love tea and pretty,..even Piper. When my granddaughter was younger, we had tea parties..even got the little brother to put on a hat and join us. He didn't mind the hat..he liked the cookies! Your buffet arrangement is so pretty..definite "a woman's s touch"! Blessings to you this Mother's Day! Sharon D.

I like Calamity Jane, such a cute movie! I like special touches, too, but I don’t use my tea cups everyday. That’s why I make sure to buy pretty but sturdy mugs. After all. Life’s too short to drink from an ugly cup!

My Happy Place is when the morning pot of coffee has been poured into a favorite mug with maple sugar and half & half added. I sit in the recliner and slowly sip what has to be one of the greatest gifts God gave to man... coffee. Amen Amen girlfriend. My first cup at 4:30 am in the quiet hours of the morning is truly a gift to me from my Lord. I totally understand. Beth Masontown, Pennsylvania

Indeed you do bring beauty to us, thank you.

So well written...it would be awesome to see pictures of your things placed the way you mentioned as it brings an image in front of ones eyes..
I love having tea and always have a mid morning one..in india we always brew tea on the stove top and have it with milk.Here we do not normally drink tea without milk...plus mostly black tea

What a lovely post--thanks for sharing!