Sunday Afternoon Tea - When I Run, I Feel His Pleasure 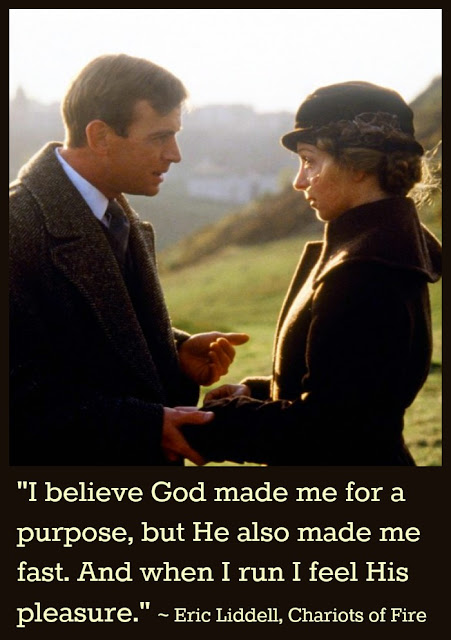 I look forward to the Winter Olympics every four years.  World class athletes amaze and inspire me as I watch their feats, especially since there is no athletic gene in my body.  Unless "curling up and reading" becomes an Olympic event.

I am never as interested in the Summer Olympics except when following a specific athlete's career.  However, one of my all time favorite movies takes place during the Summer Olympics... Chariot of Fire is one of the most inspiring films ever made.

Based on the true story of Eric Liddell, who finds out his main race will be held on a Sunday and decides to hold fast to his convictions of keeping the Sabbath only for God and chooses not to run.  Of course, we probably would not have heard of him if God did not honor his decision and he ended up winning a gold medal in a different event... but that is part of the story.

There are a number of quotes from the film but my favorite is when he tells his sister, " I believe God made me for a purpose, but he also made me fast. And when I run I feel his pleasure".

I think it is possible that the question people wonder about the most is, "Why am I here"?  Those of us who have made Jesus Lord of our life should ask the question slightly differently.  That would be, "For what purpose did God create me?".

Few people actually answer those questions.  At least from what I have seen in my years upon the planet.  They explain what their job is or perhaps their favorite hobbies.  Those who are the more spiritual among us may say that they are here to give God glory.  Which at least sounds good.

But really, what were you doing when you have felt His pleasure?  What activities can you do in which you feel you were born to do this, those in which you lose track of time?  Perhaps they came easily to you or it may be that... like an Olympic athlete... you wanted to excel so much that you were willing to put in the time to be among the best.

Was there any time that you have felt His pleasure with what you were doing?

I think the reason many of us have a hard time remembering anything is that we assume we are talking about the big stuff of life here.  Like ummm... winning a gold medal for England.

However, if you look through the Bible at the people whose lives have been recorded for all time, you will find that just as many seemingly small events are recorded as the big stuff.  For every person asked to build an ark, another simply fed the hungry.  While David slew his giant, Lydia simply sewed lovely clothing.  We are told the story of Mary the mother of Jesus... and Mary who simply poured perfume on his feet.

Noah was given directions by God and then spent over one hundred years perfecting his craft.  David had practiced killing the bear and the lion from the time he was a child, just in time to know how to bring down the giant.  Lydia, I am certain, loved to sew.  It made her happy.  It energized her.  She could hardly wait to give her gift to a friend or family member.

They were born for that which the Bible describes... and each brought God pleasure in their deeds.

As I was pondering this question, I thought about times in my own life that I felt absolutely alive.  As if He were there with me, enjoying the moment.  I'm sure there were some big events that I felt His joy (such as my wedding) but honestly, what I can remember are the little instances.  Those that would go unnoticed by the outside world.

I remember a day when my daughter was a toddler and after her well baby checkup, I drove to a favorite department store that was close to the doctor's office.  This was in the day when they still had tearooms.  I felt such joy as I pushed Stephanie in her stroller, talking to her as I perused books and pretty china.  Some things have not changed.  ;)

We had lunch in the tea room before heading home and even though she did not talk in full sentences, yet... the communication between mom and daughter was delightful.  She enjoyed her day, too.  I felt His pleasure that day for I loved being her mom after losing our preemie son just a year before her birth.

I recall one of the many times my son and I hiked on trails together when we homeschooled.  He was probably around age nine or ten at the time.  The weather was perfect as we hiked the familiar paths.  I felt His pleasure that I loved the gift of this son, born when we thought we were not having any more children.

I have been in a corporate meeting room as the group I had been working with found a resolution to their challenges.  That season which He let me spend in corporate life, and providing me with the abilities needed... I knew it was due to His gifting and I felt the pleasure of God.

I felt His pleasure at my daughter's wedding in the chapel in a forest near where I had grown up.  I felt His pleasure at my son's wedding reception as we danced to the song he picked out for the mother-son dance... Garth Brook's The Dance... a song that is dear to me.  For their dad and I had remained faithful and raised our children to love God and honor Him and now... they were starting their own families... and He was pleased.

For you see, the reason Eric Liddell felt His presence when he ran was because... he was born to run.  He was created to run.  God knew that it was through running that he would have an audience to spread the Gospel of Christ.

We feel His pleasure when we are doing that for which we were created.  I feel it when I'm finally getting the words that I'm trying to say as I write.  I feel Him when I'm with my family for I was created to be their wife, mother, mother-in-law, and grammie.

Okay, I also feel His pleasure at the sight of a beautiful teapot, while reading a good book, and when I am in the midst of baking a cake or chopping vegetables.  For that is the way He created me.  I am the sum of the gifts and the talents and the places and the work for which I was asked to do.

You and yours and me and mine and all God's children feel His pleasure when we run... doing that for which He created us.  Think of what you absolutely love to be and to do.  I have a feeling that is where you will feel His pleasure as you learn and grow and continue being faithful to your calling.

Eric Liddell gained fame in the Olympics and died as a missionary in China.  In both places, he was doing what he loved to do.  With different outcomes.  One would seem a success while the other would be deemed a failure.  But not in God's plan.  I think if one were to ask him now, which of the crowns he prefers... the crown of the Olympian or the Martyr's crown.... we  know what he will say.  Both were what he was born to do.

In both instances, he felt God's pleasure.  Earthly success and Eternal success.
Posted by Brenda@CoffeeTeaBooks at 5:54 PM

Home schooling my children was one of the times that I truly have felt that I was doing what God asked of me to do. I felt that it was the job that He intended me to do.

Really helpful concepts here - challenging to me today.
Thinking how frequently the times I "feel" God's pleasure have been times when I least expected it! They took me totally by surprise....
Hmmmmmm. I wonder if I could go back and review them I could find a pattern?
Thanks for getting me thinking along this track (no Olympic pun intended)!

I have looked several times today to see if you had posted yet, and here I am at 11:40 p.m. having just read this and am amazed at the path your ponderings take. Amazing words. God has given you such a wonderful gift with words. Very worth the wait today. Blessings to you, my wordsmith friend, Sharon D.

Thank you for this. I needed it so badly today.

What an inspiring post, Brenda. BTW, one of my long ago favorite Christian songs was Twila Paris's He is no Fool about Liddell.
https://www.youtube.com/watch?v=EALyEo4aC8c

Thought provoking post but I'm not sure there are "simple" acts when done in Jesus name. A cup of cold water can turn someone's life upside down as well as their eternity.

"We feel His pleasure when we are doing that for which we were created. " Thank you for this wonderful sentence in today's post. An encouragement to my life as a Homemaker. I might have something to say about that on my Instagram later today!!