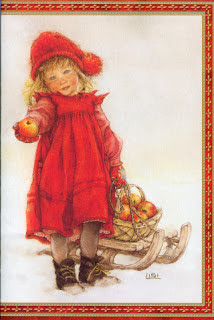 I enjoy finding the perfect Christmas gift for loved ones, even while on a budget.  Probably because I don't have to shop for all that many people compared to very large families.  However, there was a panic late this week as I realized Christmas was around the corner and I still had not wrapped and sent the gifts to New England.

One expected and another unexpected visit to the eye specialist took a few days away from being able "to do" and a pesky sinus headache from a fierce, wind driven front were partly to blame for the reality check.  I have two thank you letters to write that are far past due, a book review past due, baking gifts to... bake, and not one Christmas card has been sent.  They may not make it out this year.

But to be honest, I think I tend to go through this every Christmas season. I'm beginning to think the month of December goes by in double speed.  I recall a woman I admired who addressed all of her Christmas cards in October.  I thought she was a tad bit early but when I think about it... she never had a year when no cards were sent out.

I wonder if she realized one year just how quickly December flies by and decided to spread out her To Do list over a few months instead of Thanksgiving to Christmas Eve.  Wise woman.

I had a few gifts purchased with Amazon credit (thanks to YOU!) that had sent to New England already.  One was a cookbook I usually buy for Elisabeth (Ree Drummond's newest cookbook) but with so many young cooks in the family now, I told my daughter not to wrap it and to let everyone enjoy it immediately.

Her new book, The Pioneer Woman Cooks Come and Get It! was a huge hit with the family.  The subtitle is, "Simple, Scrumptious Recipes for Crazy Busy Lives".  (That certainly describes her family!) So we have a good review from ages seven through (shhhh... we won't tell).

One of the reasons I first began to give Ree Drummond's cookbooks to Elisabeth on Christmas or Birthdays (according to when the book came out) was because it was so good for new cooks.  With mostly easy recipes and photos of the cooking and baking process, it helps every cook to know what to do in each step.

So when I received an Amazon gift card from a blog friend via email (another thank you!)... I knew what I wanted to buy.  I now have Ree's book sitting next to me and multiple recipes have been bookmarked to try soon.  I agree with Elisabeth, each one of them looks good.

Ree has a special "Ode to Charlie" poem in the back and anyone who followed her blog before she became famous on The Food Network will smile and cry over that.  I think Charlie was the true star of the blog.

Let's see, I really don't have anything important to say today.  Another ramblings kind of post. We did get the package sent Friday on the way home from meeting Mr. and Mrs. Christopher for lunch.  They were passing through town on their way to Chicago to see Wicked, the tickets having been purchased last Spring.

On Thursday, when I was not feeling well after the eye injections, I realized only two items on my To Do list had immediate time limits so I concentrated on them.  They were both accomplished Friday morning and I could feeeel the tension leaving.

If we are not careful, Christmas can become one more item on the To Do list after another.  I'm determined that doesn't happen and, yet... it does.  That means it is definitely necessary to spend more time reading the Word by the light of the Christmas tree on December mornings.

Mentioned in this Blog Post
The Pioneer Woman Cooks: Come and Get It!... here.

Disclaimer:  Most links to Amazon.com are Associate Links.
Posted by Brenda@CoffeeTeaBooks at 4:35 PM

I have one more gift to buy, and a few small parcels to pop into the mail. They are just 'love' gifts so if they arrive after Christmas that's okay.

I hope your eye is better -

Rambling post or very organized thoughts, I always look forward to and enjoy reading your blog. Best wishes for a most blessed Christmas!
Sharon D,

A few years ago, I belonged to the forum on the Organized Christmas website, where I learned about "Rudolph Day"

Each month on the 25th, people do something Christmas related. Some listened to music and watched movies, but most of us concentrated on doing something to help prepare for the holidays.

I usually address a few Christmas cards! 10 months of addressing a few enveloped is a great head start! I am often finished by August. I just address them; we writ our messages and sign them just before we mail them.

Sometimes I'll try out a new recipe I find that I find, rather than take a chance on making it for the first time on Christmas. I always peruse the clearance sections of favorite websites for possible gifts. January 25th is usually a "what worked, what needs tweaking" exercise, while things are still fresh in my mind.

Every little but of prep helps, especially as I have gotten older, and it's such fun to have that little bit of Christmas to look forward to each month!

I hope you have the Merriest of Christmases!!! Sunshine

Good post. And I love the idea of 'Rudolph Day' from the above comment - hope I can remember that one!

Yes , December is double speed !! I love Thanksgiving , but so wish it was the same as Canadian Thanksgiving, It seems 2 of my favorite Holidays are so smack dab close to each other , I am throwing Thanksgiving into a box and yanking out Christmas from another...I got cards sent last week , some cookie dough made this morning , and not one single gift bought yet ..I wonder if we could get Thanksgiving moved to early November somehow...the Rudolph day is a WONDERFUL idea . I hope I remember ...

This year we held Christmas at Thanksgiving when all three of our sons, daughters-in-love and our 6 grandchildren were here. The grands aging 9 and under exchanged names. Our adult children do not exchange gifts. We gave the grands one gift and each couple money.
-
It was simple and delightful.

My church responsibilities for the month are accomplished. Right now I have my feet up and have the luxury of savoring the rest of the week. Sadly, no company but DH and I will relax and reflect. Thankful for the busy time at Thanksgiving, thankful for the quiet time now.

My first thought was also mentioned by another reader. "Organized Christmas" sends out an e-mail on the 25th of each month, reminding you to do something (even a house cleaning schedule) so that you're not stressed out by Christmas. You of course have to tweak it to fit your own personal needs. The date is not that hard for me to remember, because the 25th is the date of our Anniversary!
We mailed our presents to our Florida grandchildren early and then they just Skyped us on Saturday to watch them open up their presents. They'll be in Ohio with the other set of grandparents for Christmas.