Living the Pantry Lifestyle - Pantry stocking during the Holidays 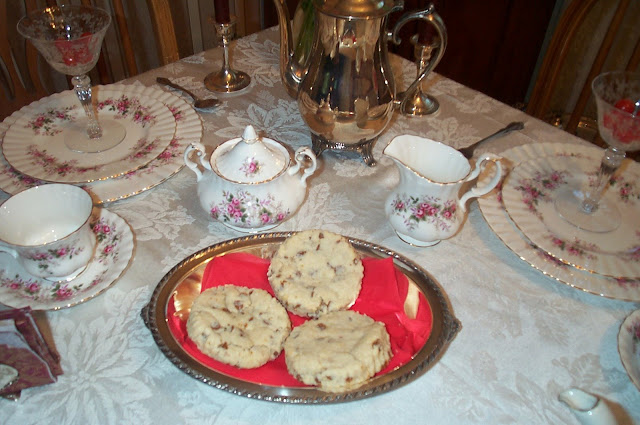 I've been able to stock my Holiday pantry a little this past week, deciding what is the current priority and what can wait until later.  For instance, I had two more bags of cranberries in the grocery cart when I walked by the kiosk that held the cinnamon chips and realized there was only one box of them left.

So two bags of cinnamon chips were added to the cart and the cranberries returned (they were not on sale, anyway, and I have some in the freezer).  Since it doesn't look like the store will carry cinnamon chips throughout the year as they once did, they are a priority.  I now have six packages in the pantry for baking this next year.

Speaking of which, I was asked what kind I found and they were Hershey's cinnamon chips, which are the only kind I've seen outside of specialty websites such as King Arthur.  In the comments from last week, Kim mentioned she couldn't locate any in Dallas and Kathy said she had found them in Houston at Randall's and HEB.

I have only seen them at Meijers (a Midwest chain) but one could check at other stores.  They are available on Amazon but like some specialty grocery items, they tend to cost more there than at the local stores.  I used to find them at Target.

Turkey is very inexpensive this year so I purchased one just for the freezer at 49 cents a pound (Kroger and Meijers store brand sale price).  I may buy another small one while they are on sale. Come around February, I'm ready again for a good turkey dinner and without the expectations of Thanksgiving.  That is a lot of protein and possibilities for soup for less than the price of a large roasting chicken. ;)

I use Amazon credit once in awhile to try new food items and I thank everyone who enters their Amazon shopping through either a link or the widget on the side of the blog.  Bloggers receive a very small percentage but it all adds up and doesn't cost shoppers a thing.  :)

You may remember that one new spice I tried a few years ago was sumac, after having it sprinkled on my hummus and Jerusalem salad at a restaurant.  I have since become a sumac fan and I now keep it handy in a jar that allows me to shake some on various dishes.

I even shake it on store bought hummus and the citrusy spice adds a delicious taste to it.  It is used a lot in Mediterranean cookbooks such as the beautiful award winning Jerusalem (I just borrowed it back from my son who borrowed it from me).

A decision this past year to do without any artificial sweeteners sent me researching what other people who have to limit sugar are using.  I tried but I don't like stevia.  However, one I kept hearing good things about was maple sugar, which is a product from boiling down sap beyond maple syrup until it dries.  I read that early New England pioneers most often made the maple sugar since it stored well and maple syrup can spoil.

It is, as one would expect, rather pricey but since I would mainly use it in my coffee or tea, I figured it isn't much more than the organic raw sugar I use at times.  I absolutely love this stuff and there are many ways to use it besides hot beverages, although given the price, I would not use it as a one-on-one sugar substitute in baking.

That is not recommended, anyway, as it is said it would be an overpowering maple flavor.  (Which it doesn't when a teaspoon is added to coffee.) Instead it is recommended as a replacement for a smaller amount of sugar should one want a mild maple flavor, such as in pancakes.  The comments on Amazon offered ways people used it, too.  For instance, one person used it in her plain yogurt.

I'm aware it has more carb factor than artificial sweeteners but I know pure maple syrup is suppose to spike your blood sugar less than man made syrup so I can see how this would be better than sugar.

Hmmm... was that a run on sentence?  Oh, well.  I think it is actually a run on blog post.  Happy Thanksgiving to fellow Americans!

Mentioned in this Blog Post:
Hershey's cinnamon chips... here.
Although you may want to do a search when you reach Amazon and see if there are any deals going on from other sellers.  This is over twice the cost of what they charge at the grocery store if you can locate cinnamon chips there.

Maple sugar... here.
This is what I purchased but there are other brands available.

Ground sumac... here.
I bought mine at a nearby Asian grocery store but I think this was the brand and no... this is not the sumac that is poison.  ;)  It taste a little like lemon and adds so much flavor to a dish.

Jerusalem, the award winning cookbook... here.  This is such a beautiful cookbook, written by two chefs originally from Jerusalem.  One is Jewish, the other an Arab.

Image: Tea time many years ago.  I've since given my daughter-in-law part of this Royal Albert set and I'm storing the rest for her.  The original cinnamon chip scone recipe (which is very different than most scones)... is here.
Posted by Brenda@CoffeeTeaBooks at 12:18 PM

Love your cooking ideas...will have to try some out.

I use a mix of Coconut Sugar and Xylitol (made only from Birch and other hardword trees...to avoid the one from corn, etc). If a recipe calls for a cup of regular sugar, I use a half cup of Coconut Sugar and only 1/4 C. of Xylitol. I find it does not do badly with our diabetic numbers...also, I do use some of the newer forms of stevia...for my tea...just a smidge...NOT a whole packet by any means...the one I am using now is called Pyure that my daughter got us started using...even picky hubby likes it ok. We are not overly keen on stevia either. A friend who is very into health stuff says young men ought not to use Stevia...it can take away their fertility...but at our ages, THAT is not a worry!!
Elizabeth in WA

I have a Cappuccino Cookie recipe that is a chocolate espresso cookie with the cinnamon chips. I shall have to look that recipe up once more now you've brought it to mind.