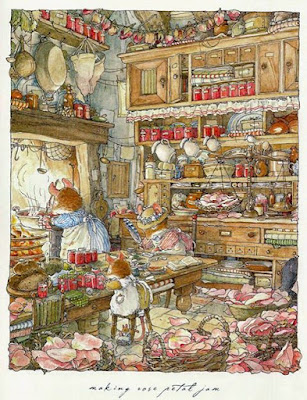 Fans of the television show NCIS are well aware of the famous Gibb's "gut" feeling for it is rarely wrong.  If it ever has been wrong.  He believes in it so much that he trains the younger agents to develop their own "gut" sense to solve their cases.

There is a spiritual word for it called... discernment.  Over the years, as we learn to trust the discernment God gives us, we also can go a long way to solving our own mysteries of life.  Not to mention figure out the good guys from the bad guys, separate Truth from what is made up, and learn to trust ourselves when we feel God is saying something.

The past few weeks, I've had that "gut feeling"... that discernment from God... that it is once again time to deepen the pantry as much as possible.  For if nothing else, the world is in a precarious position.  I'm not afraid and I don't suggest stocking up in fear, instead I see it as God's reminder that it just may be possible we will need to stay inside awhile or there may be a stop in the flow of goods from one area to another.

Should North Korea decide to show off a bit and bomb anywhere on earth, it will affect us here in the States and in parts of the world not even near where a bomb would fall.  People will then become fearful and there most probably would be a run on stores for food and supplies.  We came near such an event recently when it turns out one of the missiles launched came uncomfortably close to a passenger jet.

In this country, another riot is going on as I write.  If you read any in-depth news coverage of what happened in Virginia (I gave up on the main stream media in the 1990s), you will hear about the numbers of people being bussed in to the city for this event.  A lot of people I trust for a very long time have written that these things don't happen by chance.  Someone is planning the riots and someone is pouring fuel on the very real problem of racism and someone is lighting a match.

I pray that we in the Church can build relationships between the races based on a mutual love for Christ and not let outside sources stir up dissension.  All races will be in Heaven and God made every one of us just the way He thought beautiful.

We need to have discernment when listening to the news.  It is not the same as when I grew up and you could trust that Walter Cronkite and David Brinkley were giving us the facts.  While I don't agree all the time with our current president, there is no way everything he does is bad and everything the previous president did was perfect. I'm thinking Walter and David leaned toward the liberal side of the political fence but the fact I'm guessing tells you there is a difference today.

You see, everywhere we look today there is someone with a match ready to light the fire of rage and then we are shocked when we see a riot turn deadly in the U. S. or innocents mowed down in Spain.  Our "gut" is telling us there is something really, really wrong going on here and if we are students of the Bible, we see what is predicted in the days before Jesus returns.

Now, for the good news... Jesus is coming back.  Yep.  He is and everything going on around us is a sure Sign of that.  Another bit of good news is this... He decided you were going to be born at this time in history so that means He prepared you for such a time as this my friends.  He gave you that discernment you are feeling.  Not to mention that perfect love casts out fear.

I'm saying all this to encourage you to trust your "gut".  Listen to your instincts.  Spend time in prayer and ask God for wisdom if you are not sure what He wants you to do... and while you are at it, pick up some more water and some cans of food and perhaps a couple packages of dried fruit and don't forget the kibble for your furry loved ones.  Even a little extra will make a huge difference should you need them.

I wrote a few blog posts about How I Stock Up back in 2009.  Although it is not information on going to the store and stocking everything at once, it does show how I keep a pantry on a limited budget.  I admit, my pantry is not deep at all but it is good enough.  That series begins... here.

Trust your instincts and if God is telling you to stock some extra essentials, do so now.  He may or He may not, only God knows your needs and what they will be.  I have written before that I felt led to have a very deep pantry before Y2K and a good friend just added a little extra to her pantry but bought a generator (which I didn't do).  As it turned out, we had a job loss during that time and the extra food and supplies were such a blessing and she moved to an area where they used that generator a lot.  God knows and He cares.

Image:  Brambley Hedge and my idea of a well stocked pantry!  (I love those books.)

NOTE:  Please forgive typos.  I go in for another shot of medicine in my eyes this week so I'm hoping they clear up like they did last time.  The computer is a little fuzzy.
Posted by Brenda@CoffeeTeaBooks at 5:21 PM

oohhhh yes.
i'm right there with you, brenda.
while the hubs and i are simplifying our lives
we're also trying to ensure any future purchases
are conducted with wisdom and prayer. and stocking
up our pantry is but one of those to consider... ♥
{{it's a wild wild world now..more so than ever in my lifetime..i think}}

Brenda, thank you for your words of wisdom. I posted about the same thing this morning and linked to your blog.

Our pantry could sustain us for about 2 months, I think. Maybe more. I am focusing most of my grocery dollars now on stocking up.

As a 'retired' homeschool teacher, I'm pretty sure I have enough pens, paper, pencils and notebooks to last the rest of my life! :)

I've been stocking up a bit more again. I always try to have extra but I am now purposefully adding more.

It is an interesting time to live.

Couldn't agree with you more about discernment.
Not sure it is possible to stock up enough to be prepared for what might come...I'm trying to be sensible, sound of mind, not hopping on band wagons, educating myself and making the best possible decisions for our household, etc. Thanks for keeping me on my "toes". :)

Hope to read good news re. your eyes soon, Brenda.

Love this and needed the encouragement. We have squared away (over the past year) our food allergies. I was extending all my mental energy on that. Now is the time to deepen our pantry for the first time! I appreciate your information. It's great for a newbie!

I usually get those "nudges" and then unexpected visitors or some medical emergency or something similar happens soon after.. I have learned to pay close attention , I haven't felt anything yet , but we usually stock up in the autumn anyway as we live 10 miles from town. The first time was about 2007 , I was obsessed with it , and then we soon needed to eat from our pantry for nearly a year! that was when I first realized it was from God .Karen