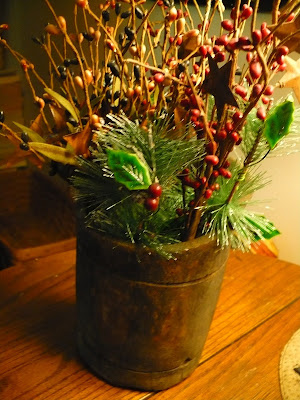 Thus says the Lord: stand by the roads, and look and ask for the ancient paths,
where the good way is; and walk in it, and find rest for your souls.
Jeremiah 6:16


My sister recently picked up the antique container, admiring the greenery and "berries" it now holds.  She looked at me and asked if I realized this container is probably the oldest object in my house?  I knew it was old but not that old!  The container looks like wood but it is made of multiple layers of paper using a pressing process which is at least from the 1800s.

She had given it to me many years earlier and to be honest, it had been stored in a dark corner as I admired it but wasn't sure what to do with it.  I love primitive items and she had come by this one when she was still an antique dealer.  It wasn't until I saw some photos in primitive decorating magazines that I knew exactly what the container needed and wallah... something old and honestly not that attractive was turned into Beauty and now sits in a place of honor in my living room.

I do love old things... old furniture, old accessories, old books, old houses.  I love places to visit such as Old Sturbridge Village and Colonial Williamsburg.  I love learning about history and books by people who lived long ago.

If you read this blog on the Home Page, you will have often seen the Bible verse which is shown above under the photo.  For each and every day it has a place on the sidebar, one of my life's verses I live by.

Ask for the ancient paths, where the good way is and what will happen?  We find rest for our souls.

When I was a young Christian, I kept most of my non-Bible study reading in the Old Testament.  Having not been raised in a Christian home and vaguely knowing the Bible at all, I was fascinated with the old old stories.  With the people who lived and worked and loved and hated and went to war and made peace and sinned like everyone else... and they were in the Bible!  Amazing.

It was during this time in my life that I had to make a decision.  Did I believe the Bible was True or was it just a bunch of stories told through the millenia, not unlike the fairy tales I had read in my childhood.   I decided it was Truth from Genesis verse one to the Maps.  Truth.  That, my friends,  has made all the difference.  I chose to follow the Ancient paths.

For many years, I read mostly books and heard lectures by modern Bible believing authors.  They were just what I needed as I learned about the basics of the Christian life.  For we do begin with the milk of the Word and slowly grow deeper as we build that foundation of Truth.  We need the basics before tackling the meat of the Word.

It wasn't long before I realized that I wanted to read what those people I respected were reading.  God had blessed me with very good teachers who read deeply and well.  I read Francis Schaeffer and understood a little.  I read Edith Schaeffer and understood a lot.  As I grew older and matured in my thinking, I have almost caught up with Francis and can now understand most of what he writes.  Not all.  He is gifted in areas which I am not.

Many of the author's names I am sorry to say I have forgotten but I do recall reading Paul Tournier, whom my pastor admired very much.  I think I even met him when he was in the U.S. and spoke at our church.  You must understand, I was in my late teens at the time and now I am... older. I know there were some questions about his theology later but he certainly blessed me at the time (and I can't recall what the questions are at the moment).

I read less theological and more practical authors who taught me how to live every day as a woman, a daughter, a wife, a mother.  Women I've mentioned before such as dear Edith, Emilie Barnes, Elisabeth Elliot, and Catherine Marshall.  Later I read Elizabeth George's inspiring books about living for Christ, beginning with A Woman After God's Own Heart.  Once again, as I read I paid attention to who these women admired and had learned from... and sought out those books.

There came a time when I was introduced to C. S. Lewis and perhaps he, more than any other writer, caused me to realize that our Christian life did not appear out of nowhere at the time of our salvation.  For it is built on the shoulders of those who have walked with Christ for centuries upon centuries.

When Lewis talks about the Ancient ways... he means the a.n.c.i.e.n.t. ways.  He taught me that those who lived long ago built the foundations that the Church stands on today and it is a good idea to read their works.  It was also through Lewis that I came to understand one can learn just as much through reading fiction than in books about theology.  Perhaps more.

As I find new authors, I tend to also come face to face (so to speak) with even more who have lived and worked and written long ago.  For instance, it was through reading books by John Piper that I learned about Jonathan Edwards, one of my very favorite people to read about.  I had heard of Edwards before, briefly in one or two paragraphs of history books.  However, in those pages he was nothing like the person I discovered.

As I wanted to learn more about this amazing man and his family, Noel Piper's book Faithful Women and their Extraordinary God recommended Marriage to a Difficult Man (an all time favorite biography) and I learned so much about him and his family.  Through learning about him, I came to know more about George Whitefield and the affects of the First Great Awakening upon the events that led up to the American Revolution.  Something, of course, I never read about in high school history books.

Through books by Eric Metaxas, I learned more about how faith inspired Bonhoeffer, as well as Wilberforce.  Through learning more about Wilberforce, I learned about Hannah More and the biography of her life called Fierce Convictions (also an excellent biography).  Mostly everyday heroes of the faith doing great things for Christ.

There are so many people who have walked before us that we can learn from.  Just last night, I was reading sermons by Eugene Peterson and found in a sermon he wrote in the 1960s, a truth that was needed at the moment.  Peterson, who has been influenced by those who walked before him, who has been a mentor to many in the ministry through the years, and now is in old age... inspiring me.

We need to grow quiet, away from distractions, and look to the Ancient Paths. In the stories of the Patriarchs in Genesis, the poetry of the Psalms, the writings of the men who walked with Jesus and turned the world upside down before becoming martyrs, to the first and second and third and thereafter century pillars of the Faith, to the men and women today who write Truth.

Mentioned in this Post
A Woman After God's Own Heart... info here.
Faithful Women and their Extraordinary God... here.
Marriage to a Difficult Man... info here.
Fierce Convictions... info here.
Posted by Brenda@CoffeeTeaBooks at 1:09 PM

This post is rich and good. I am going to reread as soon as I finish this comment. I am so praying for another Revival like the one that spread like fire in the early days of this country. We need it. I am going to borrow your thoughts on walking in the ancient paths when anyone comments how foolish Christianity is...yes, just happened recently...I'll be better prepared next time. For skinny little texts, Francis Schaeffer packed them full with incredibly dense concepts. I have to read them three and four times and by "them," I mean sentences! ☺️

Thank you for sharing your thoughts, which I must say are pretty dense in meaning themselves!

This post made me think of the song by Michael W. Smith..."Ancient Words...ever true", have you heard it?

Here is a link: https://play.google.com/music/preview/T3t4wue6zd75qvu72z24jcfivem?lyrics=1&utm_source=google&utm_medium=search&utm_campaign=lyrics&pcampaignid=kp-lyrics

"...caused me to realize that our Christian life did not appear out of nowhere at the time of our salvation. For it is built on the shoulders of those who have walked with Christ for centuries upon centuries."

My kids and I read about Wilberforce this year in our homeschool. Amazing how he just.stayed.the.course.