Living the Pantry Lifestyle - Procrastination Challenge and a bread recipe 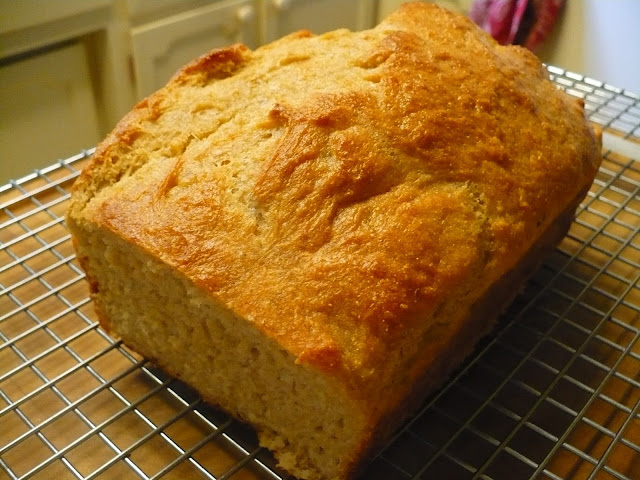 You may remember a couple years ago, I gave myself a procrastination challenge to restart some projects that needed to be accomplished.  It worked fairly well so I've been on another such challenge lately.

This is what helped me get the deck and front porch decorated the way I like them... a little at a time.  The only thing I still need to accomplish is to wash the siding on the porch but that will be done at the last minute when I feel a burst of energy!

I've been challenging myself once again to make appointments and get some little projects done here and there.  One good thing about succeeding in the little areas is that it encourages me to attempt the bigger ones... like trying a brand new bread recipe (which involved some work before hand).

I've wanted to try a new bread recipe that I've had sitting in a drawer now for way too long.  I have plenty of wheat that can be freshly ground after two different friends gave me a bag a few years ago.  It lasts almost indefinitely when stored well but I wanted to get the nutrition back in my diet.

I started grinding wheat in the 1990s when I found out it is an excellent way to get hard to absorb B vitamins into the diet, as well as good fiber. For years I made a lot of our bread but this past year, not so much.

Illness this past winter made me more tired than usual so we have been buying our bread.  Since I hadn't been baking bread, I had ground whole wheat that was gong stale.  I still used it in quick breads but so rarely that I threw the rest away when I washed a few canisters from the garage.

I know I could have tried the new bread recipe with all unbleached bread flour but for some reason, it had to be at least partially whole wheat to my thinking.  So finally... a couple days ago... I cleaned the wheat grinder that had been neglected and last night I ground enough wheat for what I needed now and a couple other recipes.

Then this afternoon, after getting a few household chores accomplished, I got out the ingredients needed and the big yellow Pyrex bowl where everything was mixed together.  Did I mention this is a no knead recipe?  Hmm... skeptical here that it would be light as well as tasty.  I let it rise for thirty minutes in the bowl and then poured it into the loaf pan that was sprayed with olive oil and then popped it in the oven and... waited.

I'm glad I had set the timer for less than the recipe called for since my oven runs a little hot.  It looked done about ten minutes early but I used my digital thermometer just to be sure and... there was 200 degrees.  Done!  (It is 190 degrees for bread unless you add milk or an egg and I had added an egg.)  Oh, my... the aroma.  I couldn't wait to try it but it did need to rest awhile.

The photo above has a slice missing because I could not wait any longer.  It smelled so good and I used the excuse that my blood sugar was dropping and I needed to eat.  It was delicious and it will definitely be made one or two times a week, it is so easy.  It's not the prettiest loaf but the ease in preparation makes up for that and it is perfect for just one or two people (or to make to serve with soup).

My next foody type attempt will be to try some pasta salads using orzo, perhaps with black beans and corn and red pepper and... will have to ponder that more.

The recipe is from Heavenly Homemakers and she has some other recipes using the same technique... here.  I want to try them, too.  Soon.  I made it according to the recipe but without the optional cream and I used half whole wheat/half King Arthur bread flour.  Next time I'll use honey instead of raw sugar and probably add an extra tablespoon since we like the honey wheat taste.

I hope you try the recipe and... is there anything you have been putting off?  ;)
Posted by Brenda@CoffeeTeaBooks at 3:46 PM

Is that a trick question? 😏

That bread looks amazing...I always study the crumb and that crumb is top shelf.

I gave up bread some weeks ago so I will be giving this some thought. I better pin it quick!

Well yes and no. I have 2 painting jobs inside that need to be done but haven't done them yet. But I did accomplish a big task today. A couple of months ago I took all of my loose recipes (those cut out or torn out from magazines or printed from online) and started putting them in 4 different large binders. I bought the clear page pockets that can go in binders and I attached the trimmed and neater recipes to a loose leaf sheet of paper (both sides) that I insert into the pocket pages. One of the 4 binders is complete. The other 3 are partially complete. But I spent all afternoon making a big dent in getting one of the binders filled with the recipes. I knew if I didn't do this with the loose recipes I had I'd never use them. I had just piled them in a large Ziploc bag and I sure wasn't going to go through that everytime I wanted to find a recipe. So I did accomplish something with the recipes even though I have a long way to go before I'm finished. Thank you for sharing your bread picture and info. Looks delicious will have to give it a try.

You know me too well....yeah I procrastinate. lol I did tackle the siding on the north side of the house that was stained from soot (badly). Simple green and a few magic erasers. It will take a while more to finish it.

I like the looks of that recipe. Thank you. Its always hard to pare down recipes for just one or two people.

I've been putting off the job of organizing my decor items. I think "not today" then some days when I think I can do it, someone needs me to do something or someone wants to visit. This is my desire to sort through it not a need so I put it off. Sigh.

I know for me, sometimes I think something is going to be a bigger task than it really is.

Was making my own bread for quite some time, and since preparing to move, have not been, and I miss it. maybe i'll try this recipe to get my bread mojo back! putting off making necessary phone calls - hate making phone calls! Monday's agenda! LynneinMN

I am afraid to say that "Procrastination" is my middle name. I may have improved slightly as I have gotten older, but it is still a big factor in my life. So to enumerate the things that I procrastinate . . . oh boy.

Like you, I find I need a challenge (or a deadline!) to get myself going. Inviting guests is great incentive!

We have been tackling the boxes in the garage- they've only been there the 5yrs we have lived in this house. Craft room is a real mess again. But several bagos went to the garbage out of the garage- we had mice- caught near 20. I think I am up to 10 bags to Salvation army from the garage. We took truck load of stuff to good will when my dd, friend and I had yard sale. So that feels good. I may do bathroom next- you know all the products you thought you'd use.
I've been making my own torilla- wraps instead of bread.