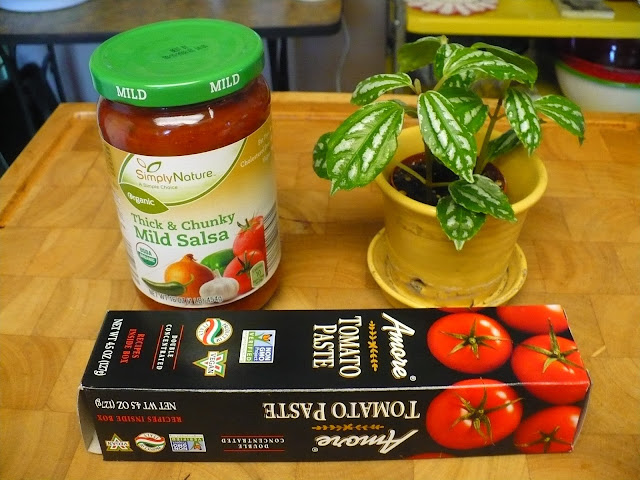 The difference in the price?  You have to add your own herbs to the second package of potatoes.  Which is easy if you know to toss the baby potatoes in your favorite oil and then toss in some dried herbs.  Since I usually use a blend of Herbs de Provence or Italian blend it is easy and cheap.

You may remember a few years back when I had a minor rant about seeing a package of hard boiled eggs selling for $17.00 a dozen when a carton of eggs was selling for an Easter sale of 99 cents a dozen.  Granted the shells had been removed and I must admit that my boiled eggs do not always look that pretty on the deviled egg platter (I have tried all the supposed tricks and still have egg shells stick at times).  However, no one really notices the difference when they are scarfing them down at the table and the savings of $16.01 is not worth perfection.

Don't get me wrong, I do use healthy convenience goods that save me time.  I keep packages of cooked brown rice in the freezer that comes in a steam-able package.  I used to cook a pot of brown rice at the beginning of the week to use when needed but with just two of us now, it is much better to use precooked frozen.  Especially when I'm usually feeling the fatigue by dinner time.  Last night I mixed the precooked brown rice with a leftover chicken breast and a half a package of frozen organic corn for a delicious (and thrifty) main dish.

I also understand when we work outside the home that quite often paying for something to be done or cooked ahead of time buys us precious family time we otherwise would not have.  As much as I believe in baking items myself, I still love the occasional bakery cake for it reminds me of the cakes my mother purchased for my birthday each year.  Good memories are priceless.

However, I'm talking about learning to do things like our great grandparents did them (or grandparents if you are my age).  Unless they were wealthy, they rarely paid people to do something they could easily do, or make, or fix, or plant, or cook at home.  These things were all part of their days. I suppose it could be because both my husband and I were born of older Depression era parents that we grew up with this way of thinking.

I got away from that thinking when I worked outside the home as a young wife and mother, juggling a family with a demanding job and attending church a couple times a week.  Since we only had one child at the time, I managed well by us eating out a few times a week for dinner and breakfast out every Saturday morning.  I admit that many favorite memories are of summer Saturdays in Saugatuck, Michigan as we walked the boardwalk and perused the quaint shops after breakfast.  It was my Happy Place.

So when I became a full time homemaker, my skills were not top notch.  I knew how to cook and to bake but only a few favorite recipes.  I wasn't very creative as a homemaker because I honestly didn't know how to be.  My mother had always worked outside the home (because she had to) and that was my hardworking role model.

I looked for homemaking skills role models and found them mostly in books and a few in real life.  I took formal classes in subjects as diverse as gourmet cooking and flower arranging.  I set up homemaking files and cut out magazine articles, some of which I still have today.  I learned to learn... and I still love to learn new things.

For instance, I mentioned last week about the tube of tomato paste (shown above), learning about using it from an article about a famous chef saying it was his favorite pantry item.  I learned it adds a deep tomato flavor which enables me to use only one can of tomatoes when I used to use two... and it tastes better!  It also makes tomato sauce when adding water for it is tomato sauce which has been boiled down (think apple butter from apple sauce).  It has been a brilliant addition to some main dishes and the tube lasts in the refrigerator for a long time.

I also, at one time, learned to use salsa as a condiment.  The organic brand above is less than $2.00 a jar at Aldi's so I usually buy at least four each month and stock even more than that in my pantry when possible.  I used to just add it to tacos but after reading how others used it, I now always serve it along side a quiche, mix it in brown rice for a quick Spanish rice, and add it to other dishes when I want added flavor.  It took learning how others used it to realize it was valuable for far more than tacos.

I was watching a show about Julia Child recently and it was said she was still learning about cooking in her 90s.  That made me feel better!  There are some things I've mastered but others... like gardening... I still have a whole lot to learn.  Then there are those skills I realized I wasn't all that ummm... skilled.  Like sewing and knitting... somehow that gene is definitely missing.

There are other skills we can learn that in the long run save us a great deal of money over the years.  My husband can fix a lot of things although he knows when to call in a plumber or electrician.  He doesn't even try to fix modern cars.  But he is very handy at building and repairing most things and quite the do-it-your-selfer.

I was fortunate that we bought our first computer, a fabulous work horse of a Gateway model, back when there was such a thing as really good customer service.  People who knew what they were dong and seemed to enjoy teaching others. I was told that there were only a couple things I could to ruin the computer (and they told me what not to do) so to play around with the computer to learn how to solve a problem.  So that is exactly what happened.

By learning a little here and a little there instead of taking the computer into the shop (unless there was a crash or it was hacked as it was last year), I've saved us a lot of money.  Just recently we were having trouble with the computer printing in color and when Christopher stopped by one evening, I talked to him about it.

I had already played around enough to realize the problem was not the printer and seemed to be in Excel.  He thought for a moment and said the program may have done a "factory reset" when we had the new modem installed and that I should look even deeper than I have for that reset.  So the next day, I brought up Excel (which I don't actually use but my husband uses it constantly) and went through what I had already looked at and did as he suggested... went deeper into the Advanced section.

Eventually, I saw the problem.  There it was, one line in the midst of a column of commands that simply said... greyscale-on.  I switched the "on" to "off" and clicked on DONE and printed out a sample and wallah... we had color!  Savings... both Hewlett-Packard and The Geek Squad wanted to charge us $99.00 to fix it.

It reminded me of Annabel* when she talks about the Vicky Challenge.  Which is keeping track of how much money she saved from doing something herself.  She now has encouraged me to make my own naan bread!

I like to imagine Heaven as being a place not only of great Beauty but also as being an Eternity of learning new things... in a perfect environment.  I will be able to carry a tune there!  I can sing with the angels there!  Hallelujah!  Oh, excuse me.  Just a little excited at the thought.

In the meantime, I will continue learning new skills on those things I can do.  Not singing.

*Annabel's The Bluebirds are Nesting blog... here.
Posted by Brenda@CoffeeTeaBooks at 3:07 PM

So that is what those tomato paste tubes come in...perhaps I will find it yet...

I truly believe that when we stop learning is when our life ends. We must keep our minds as active as we can no matter what our age.

I like the idea of that tomato paste in a tube! Going to look for it!
Tim and I have been DIYers all our married life! It allowed us to live on one income and raise 6 kids!