Living the Pantry Lifestyle - What To Do with the What If's 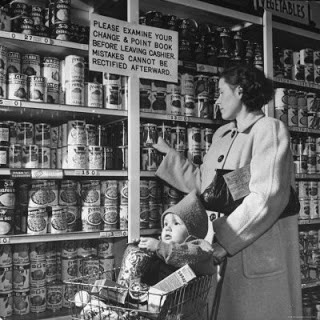 It's the elephant in the room these days.  The wars and rumors of wars chatter.  We really can't (and should not) hide from it because the world is a powder keg and has been for a long time.  It has to be a God thing that a worldwide conflict has not happened, yet.

So I was thinking recently, what would it look like if the "what if's" happened?.  The most likely event to occur is an escalation of war between North and South Korea, while beginning as a regional war, it would probably become a world war due to treaties and such.  I think eventually we will see something more significant happening in the Middle East, too.

Then there is the possibility of war actually on U. S. soil.  The most likely scenario is that there will be another terrorist attack and some who write about such things believe this time there would be multiple attacks throughout the nation to disrupt commerce more than 9/11 did.  Such an attack could stop the trucking industry getting products to stores, or at least slow them down.  My friend in New Mexico had shortages in her stores because food and supply trucks were diverted to the Gulf states after Katrina.

My husband lost his job in Detroit as a result of 9/11 because the German owned company he worked for decided to close their plant in New Hampshire and he had just accepted a transfer there.  Imagine what would happen if there were multiple attacks affecting commerce?

I've always said the biggest reason to have a deep pantry is the prospect of a job loss.

So here I have been pondering all of this and wondering if I should write about it here on a Saturday morning.  I think the answer is yes... for those of us who would just as soon avoid the subject and read a novel.  We are not in a high position politically (although God calls us to pray for those who are) but we are in a position of influence in our home... and that is where we can do something.

I've read numerous stories of people in war situations who survived because God warned them ahead of time to begin stocking up certain food items.  Some of these people actually saved the lives of others and not only their families by their obedience to hear from God.  I get enough emails from people who have been getting these feelings for awhile now that it cannot be a coincidence.

The first thing I pondered was to remember what was in short supply during WWII.  I don't know if it would be the same today but it makes a good place to start.  We know that there were many items which were not rationed but were hard to get and even if there are not shortages in our countries, items would be more expensive.

For instance, sugar is the first thing I think of since many novels I've read in that era talk about the short supply of sugar.  While I use regular white sugar in most baking, I use an organic raw sugar for everything else.  I use it in my coffee now instead of Splenda, trying to get more free of chemicals in my diet (the flavor is more intense so I use less than I would with white sugar).  Organic raw sugar could easily be hard to get.

Another item that I've read was in shortage and had serious health consequences (let's face it, we don't absolutely need sugar) is fat... rather oils of various kinds, lard, etc... the body needs fat.  Contrary to what diet doctors have preached.

Some other items in short supply were in Europe were meat (I believe SPAM became available in WWII to feed soldiers and contrary to what my husband says, it is meat), dairy products, eggs, some fruits, some vegetables, and products having to be shipped in from other countries.

While it is good to learn from what has happened in the past, the best way for you to prepare for possible shortages is 1) to look at your own most used recipes and decide what you need on your pantry shelves, and 2) make some changes now (if necessary) to make it easier for you later.

I have kept a Pantry List for decades now and the priorities have changed as our circumstances and diet have changed.  One thing I plan to do this week is to update that list.  It is especially important if you have limitations of space and/or budget to think through what would be the priorities you want on your pantry shelves should you not be able to go to the store.

The specifics will be talked about more next week.  However, I'll remind all of us today (including myself) that it is not wise to try to prepare for The End of the World As We Know It.  Even if one did have enough space and a big budget, there are too many variables to make that work and you would go just a little crazy in the attempt.

Instead, we do what we can with what we have and trust God for the rest.  Until next week...

Some good links:
I go to the Deyo's website for news updates throughout the week.  (Warning... it is Conservative and there may be links to what some would call conspiracy theories so if that kind of thing bothers you, be forewarned.)

However, Holly has been at this for a long time and she finds the best articles.  Since she provides headlines and links, you can choose which to peruse further.  Their website Home Page is... here.

I have said many times that Holly's book Dare to Prepare is my favorite prepping book.  It is now in its' 5th Edition.  It is a huge book so it is not cheap.  However, the cheapest place to buy it is at their website.  Updated: Info about ordering the book... here.  You can find out more detail about the book... here. The links are not my usual Associate Links.

Very highly recommended!  It is the only book you need for preparing for any emergency.  I have an older edition that has a nice note from Holly in the front and nobody is borrowing that from me.  ;)
Posted by Brenda@CoffeeTeaBooks at 4:40 PM

I've been thinking about this again, and am going to work to get my pantry back up to where it had been. It wasn't enough for months, but we've used up a good bit and it needs to be replenished.

Off to check some of your links!

I agree with you-I think we are headed into some difficult times -need to focus on my pantry again.
Thanks for the good reminders
Becky

Thank you so much for the many gentle nudges to "deepen our pantries" as you say. Be it a personal job loss or a natural disaster (or worse) it is a wise practice that, at the very least, will add convenience and save money (via stocking up when things you use are on sale or buying at bulk discount). Our grandmothers and great grandmothers knew this lost art and you are blessing your many readers by reminding those of us who have not adopted this wise practice to seriously consider doing so...even on a small scale.
Sending love and blessings to you and your family.
Warmly,
Tracey
xox

I was just talking about this very subject with my dear friends last night. They are an older couple and were talking about WWII and the rations. She believes that we are headed there quickly. I have never been a prepper although I keep quite a bit of food on hand. However, I truly believe that we are headed into a possible fight that will lead us to needing to be preppers and possibly underground bunkers.

I have been reading this for a while but never commented. I am a young mom of three. I have no experience in deepening the pantry and a limited budget (in income ministry family). I have checked out some books but there is so much information that it is very overwhelming to me. I would like to see you write more about small practical ways to start out. We have a small closet pantry in the kitchen and, with organization, I could really stock it.