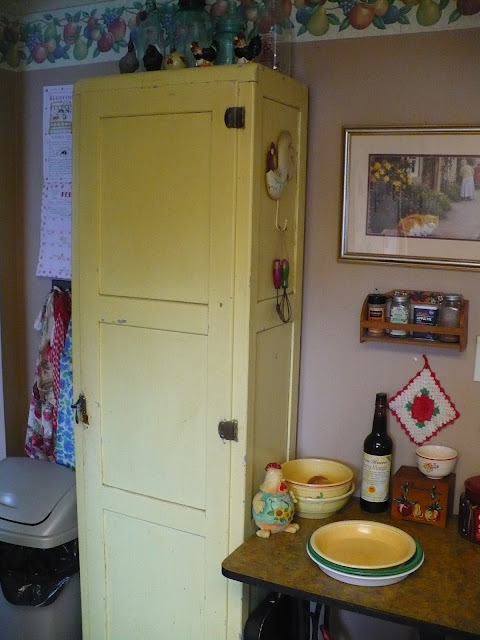 The unseasonable warm temperatures are forcing buds to open early where I live as well as my need to get started on Spring cleaning.  (Even though it was nearly 70 here yesterday and we awoke to snow on the ground this morning.)  As usually happens in my world, the decision of what to declutter was made for me when I was trying to find something on the spice shelf.  It was time to get rid of a couple jars of herbs that were old.

My spices, some baking supplies, and other ingredients are stored in the yellow pantry inherited from my mother-in-law.  I've shown it before, it makes me happy in all its' chippy vintage glory.  I don't have a lot of cabinet space in the kitchen so this has become invaluable. 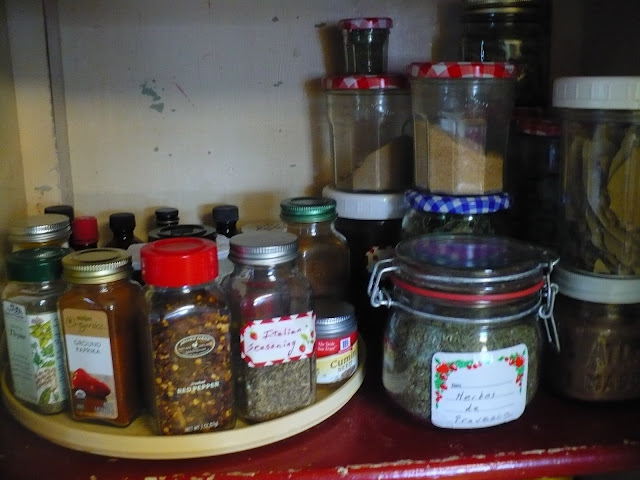 So this was the shelf that needed my attention last week, speaking of chippy paint.  The shelf above it holds baking items such as baking powder, soda, and the "sweet" spices for baking such as cinnamon.  This shelf holds the savory spices and the extracts.

The jelly jars and canning jars contain herbs and spices I've bought in bulk (inexpensive when purchased from bins at the health food store) and herbs I've grown and dried.  The Herbs de Provence was a gift from my daughter, being my favorite herb blend.  Ummm... this was after I decluttered!

If you have read my Saturday posts very long, you may remember that the advice given by spice companies annoy my frugal-ness.  Why?  Because they are not true and they are wasteful.  Read almost any Q & A about how long one should hold on to their spices and the answer is usually for one year.  I even read one answer that said six months!  Not.  True.

Spices last for years and our ancestors who had to pay big bucks for spices would be appalled at us just throwing them out at the one year mark because that is what spice manufacturers suggest.  So you have to buy more of their spices, of course.  Truth is, I have had some spices for years and they are fine.  Whole spices last quite a long time and ground spices less time but far longer than any year.

I will say here that you have to watch paprika because it can get buggy (some people keep their paprika in the freezer).  I have read that dry mustard can turn but I've never had it happen.  Should your spices begin to lose their strength, just add more.  It is so easy to check the potency of spices and herbs, just take a little taste.  Although I wouldn't recommend that with cayenne or red pepper flakes.  Yikes!

You do have to pay more attention to herbs for they can lose their potency after a year or so.  Woody dried herbs such as rosemary last longer than leafy herbs such as basil.   However, I have had the Herbs de Provence for over a couple of years and it is still good.  I usually throw out last year's herbs that I grow and replace them with the current harvest when they have been dried.

I did not cook with many spices or herbs when I was first married, mainly because my mother didn't use more than salt and pepper for cooking.  She did have a little can of poultry seasoning to use at Thanksgiving and I have wondered how old that was!  She had cans of cinnamon but I have imagined what she would think of my desire to use whole nutmeg?  As an aside, I've often wondered what she would think of something like pink Himalayan salt?  I think if she were here I'd buy a small jar just to see her face. But I digress...

I do love experimenting with various herbs and spices now.  It is a relatively inexpensive way to travel the world, through recipes.  I'm learning more about spices and herbs all the time. I've learned to add just a pinch of cumin seeds to the oil in the skillet and let them cook on low about a minute (they burn easily so I watch them) and then add other ingredients for my chili.  Hubby hates ground cumin but likes the flavor it adds this way.

Another experiment that worked well was to add a teeny tiny pinch of red pepper flakes to the oil at the same time for things like chili or goulash to add the tiniest bit of heat.  If I was cooking for just my son and me, it would be a full pinch. Such experimenting is what makes cooking fun instead of the same old, same old... 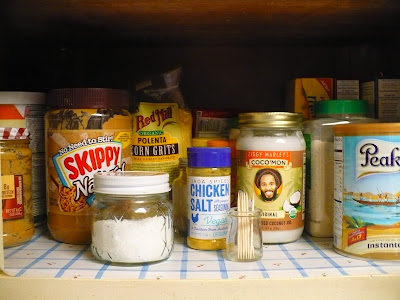 Some spices are also located in the kitchen cabinet over my cutting board.  The chicken salt was my most recent experiment, having found out it is popular is Australia and I hadn't tried anything from that country.  They use it on their french fries and I use it on roasted baby potatoes.  Last night I tried it on roasted baby carrots and it was quite good.

Behind the chicken salt are a few various types of Mrs. Dash blends.  I especially like their lemon pepper.  The small canning jar holds my course kosher sea salt that I cook with.  I season as I cook so I only put salt and pepper shakers on the table when I have company.  Because invariably people ask for them but I always warn people to taste before salting extra. 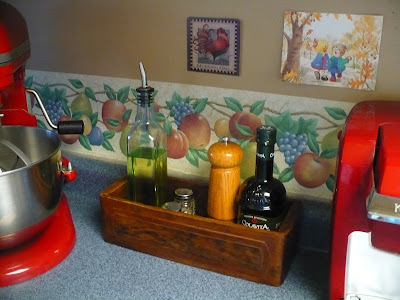 Speaking of which, I keep the salt and pepper shakers here in the vintage drawer along with the pepper grinder (which is what we use all the time), the canola oil, and the olive oil.  My husband does use the salt shaker for his eggs and such.

Spices and herbs are very important if you store food such as rice in an emergency pantry.  They will make a bland food quite tasty.  I have found the Mrs. Dash blends to be particularly good with brown rice.  There is a very interesting Globe Trekker special about the spice trail if you are interested in such things.  I found it fascinating to see how spices affected the geopolitical world, especially prior to the 20th Century.  They also have a Planet Food special about tea.

Disclaimer:  Most links to Amazon.com are Associate Links.  I thank you.
Posted by Brenda@CoffeeTeaBooks at 1:03 PM

I really enjoy seeing photos of "real" kitchens!
I like they way you've divided up your spices a bit, placing them to be the most handy. I also appreciate the confirmations that spices last longer than one thinks. I DO have some old ones and use them successfully. (They cost too much to throw out before their time!)

I've always found that spices last longer than they say to keep them, and I've always just put more in if they aren't as strong in flavor! So simple.

This is a good post, about basics. I need to go through what I have. Organizing is a big thing here at my cottage this year!

We always use a pepper grinder and I use 'real salt' which is pink with dark spots of minerals in it. So good.

I like your idea of seasons for rice in an emergency.

Trust you are well now!

I loved seeing your kitchen. Cabinet is the best! I agree about the spices they do last longer than the company says. My mom was real life chef and she said that was hogwash.
I loved getting to peek into your world.
Blessings,
Patti

Very interesting read, Brenda!! I totally agree with you as to spices lasting much longer than we are told. You can generally tell when it is time to toss them...they will change color and/or smell. I have never heard that paprika can go buggy...thanks for that info. I do not use my spices so much as I should...yes, in chili I use many, but in most things not so much. I just got some herbs de provence and I am wondering if you care to share what you like to use that in.

Hubby's grandma grew some things in her garden and dried them...one I loved so much was her sage. She died the year before we married...but hubby's mom gave me some quart jars of her mom's dried sage. I saved it just for the thanksgiving stuffing. It lasted well over a decade. And we were sad to see it go. It must have been an unusual kind, as I have never found another dried sage that tasted like hers!! Grew some and dried it myself a couple years ago...but it is not the same as hers.
Elizabeth in WA

Many years ago a dear friend gave me a glass jar with a red check lid. Seeing them in your cabinet brought back wonderful memories.

I think we had the same mother! Salt and pepper were more than sufficient for any cooking, except a bit of sage for Thanksgiving. Happily, my mother is still alive and cooking, but she still thinks it amazingly weird that I became an herb farmer, cook with and love herbs. Love your pantry. Carolee