Sunday Afternoon Tea - Because of the first Advent 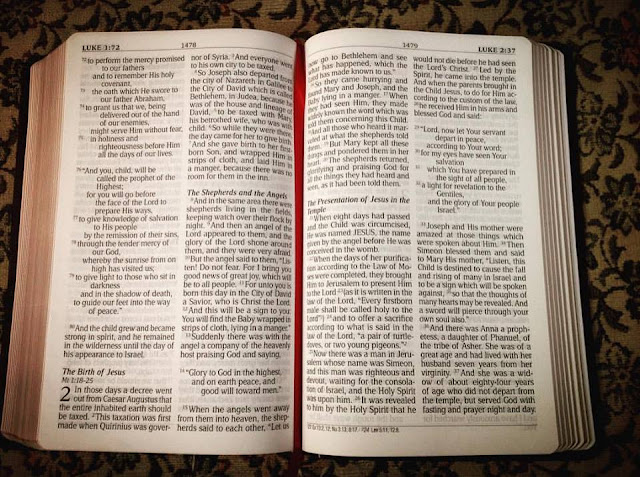 The gloom of the world is but a shadow.  Behind it, yet within our reach, is joy.
There is radiance and glory in darkness, could we but see.
And to see, we have only to look.  I beseech you to look!
Fra Giovanni

There was a time in November... about the day the turkey was placed in the refrigerator to begin defrosting... I decided to spend time in the first few chapters of Matthew and Luke during the Advent season.  I wanted to immerse myself in the times and the places and the events before, during, and just after the birth of our Lord.

It has been an eye opening experience.  I think when Bible passages become so familiar to us, especially in Luke where the chapters are read over and over this time of year, it is easy to miss part of the Story.  His Story.  Her Story.

Last week I read the warning to Mary from Simeon that "a sword will pierce through your own soul".  There in the midst of the singing of angels and the wonder of the shepherds and the glory of it all... was the shadow of the cross.

Jesus was born to die.  That's about it.  The amazing thing is that He had a choice to stay in Heavenly places but instead he became the size of a fetus and was born in a manger and wrapped in torn cloths and became a man to live as man and to die as a man/god.  The one True God.

Long before my heart was broken and the light went out of Christmas, He had prepared me for my loss.  I may have stomped my foot and pouted and told Him that His timing is rotten but I see that the very Scriptures I have been immersed in have helped to answer the prayer that has been spoken aloud many times this past week.  "Heal my broken heart."

In my reading of the same passages over and over, I came to realize just how difficult those days prior to His birth must have been for the young girl and her betrothed husband.  I know how the story ends but when she was heavy with child and being forced to travel, I wonder what thoughts were going through her mind.

Did she stomp her foot and pout and remind God that she agreed to all of this so you would think He would have made it easier for her... for them?  Did the events leading up to the birth of the Savior cause Joseph to ever doubt and wonder if it was really true?

I mean, really, if God was behind all of this then did it have to be so very difficult?

Actually, looking back on it from 2,000 years we know it did and it was all in God's plan.  But walking through it must have been an inconvenience of such magnitude to bring on human felt doubts.  Even in a godly young woman and the man who loved her.

You would think God would at least have provided a room at the Inn and a friendly woman to be her midwife.  What thoughts went through the mind of young Mary as the intense pains of labor were upon her?  I've often wondered if God gifted her with a painless birth or did she go the way of every other mother who has given birth on this planet?  In pain comes joy.

Both my son and my daughter were born during the Holiday Season so there have been two tiny babies rocked by the light of the Christmas tree.  The first, a daughter born as a miracle after the passing of her premature brother the year earlier.  The second, a surprise mid-life baby boy. And I thought of the teenage mother of Jesus. Mary knew she carried the Son of God in her womb.  Joseph was aware he would be the earthly father of the Messiah.  What was it like that first night when they looked into the eyes of the human born Son of God?  The Bible tells us a few times that Mary "pondered these things in her heart".

Most of the artwork we view regarding the birth of Jesus is within the hours of the night and that is when we need Him most.  When the temperatures are warm and the flowers are blooming and I'm sipping lemonade on the deck... it is fairly easy to be joyful.  But in the bleak midwinter when the winds are blowing and the snow is falling and I can feel the chill in my bones and there is an emptiness... I think of how dark this world can be and I need His Light and  His Warmth and His Hope.

I live in a culture where Advent is immersed in the Christmas festivities and the carryover of sparkle and light and music and the scent of pine trees overwhelm any darkness or sadness of waiting.  But this year I understand again what Advent is all about.

It is in the waiting that we have Hope.

We wait... as does all creation the Word tells us... for the day He makes all things new again.  There is already no victory in death because of that first Advent and that first Resurrection.  For there is now that Hope of life after death for those who have accepted that the Story is True.  That He is the Way, the Truth, and the Life.

So I will continue reading for the next week or two about Mary and Joseph, about the angels that brought tidings of good news, about the events that Mary pondered in her heart, about the coming of the wise men (probably to a toddler Jesus) who saw the star in the sky... and experience the hope of the second coming of that very same Savior only this time as the King of Kings and the Lord of Lords.

Photo:  My first new Bible in twenty years that I'm absolutely loving to read.  The MEV Bible is a beautiful translation... at this Associate link... here.
Posted by Brenda@CoffeeTeaBooks at 5:25 PM

We sang, "Thou Didst Leave Thy Throne" in church today and it makes me think of your post.

During this season my heart cries "oh come to my heart Lord Jesus, there is room in my heart for thee." His coming keeps the darkness at bay, the Light of the World shining forth.

We need Him so very much.

Have not heard the "old, old story" told in better terms. You have probably painted a more realistic picture of the events of that time. I think I need to read and re-read those scriptures. Blessings to you, Sharon D.

I have a post brewing and when I finish, I think I shall be linking here. My thoughts have been quite similar to your own. MEV? I must learn more.

We were watching a spoof nativity play last night and the main point was poor Mary and all the guests who came that night and how awful she felt, etc. etc. and the spoof made her all whiny and crying, etc. It was funny, and I got the point, but I think Mary's attitude all along was "I am the Lord's servant, may it be to me as you have decreed." Of course her situation was tough but I imagine that heart attitude continued throughout the Christmas story and I imagine her humble submission to God's will followed her even to the cross and the sword that pierced her heart.