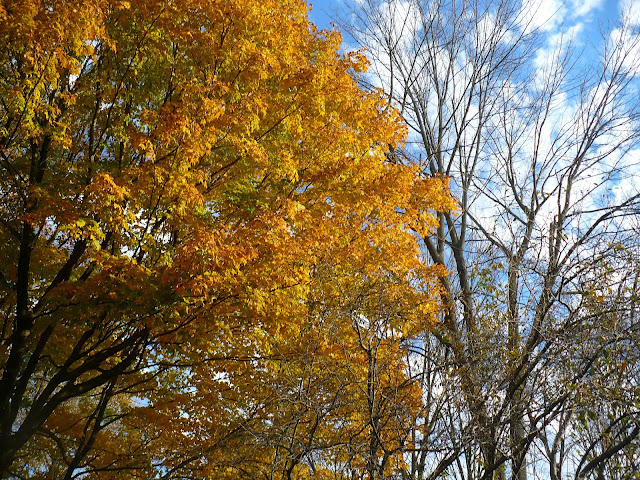 Recently I was walking past the forest toward the county road where the rural mailboxes sit, taking my time to enjoy the sights and smells of late Autumn. I have stopped to enjoy the scent of the forest each day in sunshine and when it is raining.  Most of the leaves are off the trees now but close to the mailbox there is a large tree left that... for some reason... still has beautiful golden leaves at the top.

Those leaves appeared to glow as they reflected the light from the sunshine, especially noticeable as most of the trees around it were now bare in shades of black and brown and charcoal.  The only other vivid shade of color was the nearby red barn which sits on my neighbor's land.

The tree reminded me of the Bible verse about not hiding our light under a basket.  This tree was certainly a lesson of going out in flaming glory and it wanted everyone to see for obviously, unlike other trees in the forest, the remaining leaves on this one were at the top where it could be viewed far down the rural road.

At the time I was thinking about how to write this week's Pantry Post so my mind was on the election.  It struck me that I want to be like that tree, reflecting the Light of God to a dark world.  The question came as to how does one balance Truth and Light and His Love.  Since pondering this awhile, the following is what I have decided in the coming week of days.

First, I will not fear.  For one thing, have you ever noticed that most of the time people are told in the Bible to Fear Not is when God shows up... whether as the pre-incarnate Christ or one of His angels?  He shows up and the world gets turned upside down while He is making it right.

God appears.  We fear.  For in any form, Heavenly intervention can be mighty awesome.

Second, whoever is elected on Tuesday will not stop the progression which has already begun.  I believe one may slow it down a bit (especially the persecution of Christians in America) and one will most likely quicken the progression.  But we are seeing played out before us the scenario which is written throughout the Old and New Testament of what the world would look like before Christ returns.  Whether that is now or in decades, the scenes are being played out.

While I believe America has had a God given purpose, I love the quote by Chuck Colson who told friends that the Savior will not show up on Air Force One.  Evangelicals and Conservatives have put our hope in the past on a political party and people always fail us.  Some far less than others but no man or party is perfect.

Third, we must learn to reach others through love and listening.  Not through ranting and raving.  Not through angry words whether spoken or written. The Word tells us that a house divided will fall... and believe me we are not only as a nation divided but we are a divided Church.  What will it take to bring the Church together?  Perhaps persecution?  I don't know, only God knows but He will use whatever is necessary.

Just recently I read the comments on a video put out by a Christian economist.  I could not believe how vile most of them were, many saying that the man made a lot of sense until he started talking about God.  There was such hatred toward Christians in most statements, swearing at him in the most vulgar terms.  Recently I was also looking up information about a book on Amazon (cannot recall which one) when I noticed many hateful comments on it, all because of the person's stand for Christ.  Mild persecution is in this country... heads are being removed in other lands for those who do not refute Christ.

The devil comes to "kill, steal, and destroy" and shall I say... divide.  He causes dissension in marriages, in families, among friends, in churches, and in nations.  For the evil one is well aware of why God dispersed the nations at the Tower of Babel... together they can do anything.

I remember reading a book by an author who had gone behind the Iron Curtain before the Fall of the USSR.  One thing that surprised him was the unity of the underground church.  He said there were no theological debates when one could be killed for their faith each and every day.  I pray it never comes to that for the Church in the free world to gain unity.

It isn't the world that shocks me for I expect it to do sinful things.  We should never be surprised when the family member who does not know Jesus as Savior starts swearing and lives a lifestyle not consistent with the Word.  When we who have the Holy Spirit within struggle with sin... how could someone who does not depend on God's strength to keep them on the narrow path expect to live?

No, what shocks me is how far from the teaching of the Bible much of the Church is today.  So what do we do when one we care for disagrees?  We pray for them that God will show them what is Truth.  I also always ask Him to show me Truth.  Then we show love.

No one ever came into the Kingdom or changed their theology through someone yelling in their face.

Agreeing with everything I believe is not a requirement for being in my family or among my friends.  Which is a good thing because if it was, I wouldn't have any friends or family!  Victoria doesn't even agree with me when she wants the window open and I tell her it is too cold.

We need to become people of the Word.  It is the light and the plumbline.  We read the Word and pray to the Word to teach us all Truth.  One thing God has shown me is to look at who are my teachers, who are my heroes of the faith... and what do they believe?  We become who we read, who we are taught by, and who we spend time with.

Whatever happens... God is still on the throne.  So often things happen that we don't understand and then years later we look back and can see His footsteps.  Then there are times I am clueless what He was doing and when I still cannot understand... I trust.

As I wrote to friends and family recently... Aslan is on the move.
Posted by Brenda@CoffeeTeaBooks at 1:43 PM

An underground church is a frightening thought. Not much light gets out from an underground anything. I am praying for a revival. Another sweep of the Holy Spirit from one coast to the other and south to north. It is certainly true that no human being is perfect. Guess that human condition applies even to presidents. =D

Thanks to your post yesterday, I feel prepared for the week. Not that I am fretting, but it is wise to be prepared.

Amen and Amen! Appreciate the truth of your words today. Whatever the future holds, we can trust Him even when we do not understand. And we do need to cover our loved ones, and our country in prayer. Blessings, Sharon D.

Thank-you for your wise words. I realize, no matter who is elected on Tuesday, God is still, on the throne, but my heart aches for our country. I was thinking the other day that Eisenhower was president when I was in kindergarten, and how far we've strayed from the values we had back then. As the days grow darker, we shine brighter! (Like your tree!)
Hugs and prayers,
Laura C.(WA)

Amen to your calming & uplifting words today Brenda! Continuing to pray for our nation & people.
Nancy

Amen. He is on the move and we can trust in Him and not in Chariots and Horses. It will be interesting to see what God allows for our country and how our faith will be challenged.

agreeing with each of the comments above..
and yours in this blog post as well, friend.
it's a critical time in our nation's history..
yet opportunity to realize our true citizenship
remains in heaven. i've had to remind myself
of this fact more than a few times this election
season. it's of comfort.

Ahhh...so good to come here and read such good sense and truth. I agree with you on it all and your commenters as well.

I've been praying and will continue to pray. This election cycle has shown us all where we are as a nation, and sadly I think most people in our country have blinders on, they can't see the truth that is so clear.

Then pealed the bells more loud and deep:
"God is not dead, nor doth He sleep;
The Wrong shall fail,
The Right prevail,
With peace on earth, good-will to men."

This is my hope.

Thinking of you today! all that you wrote here is true! Praying that our kids/grandkids will be equipped for the world that will be theirs.....

Indeed, this post is a breath of fresh air! During these past months, there has been such angst and fear and ranting and raving and unkindness. So much of all of this...and so little trust. And trust is what it all boils down to. Do I trust Him? Do I trust that He is in control? Do I trust that His ways are so much higher than mine and He may be doing something that I do not and can not understand?

Beautiful post ~ Agree with all the others who posted.
Jesus is still on the throne!!

Just beautiful! I agree God is seated on the thrown and we are seated with Christ in
heavenly places. Thank you for your post so full of peace. It is wonderful that he can bring peace in the midst of a storm that peace be still and the peace that passes
all understanding.
Have a very blessed day,
Patti

How I wish and pray that everyone would come to understand what you say and to act upon it. Then the discension that is in our land now would be no more. Thank God that He is in control because we surely cannot change or handle what we see around us. I believe God had a hand in this election and I will look forward with expectation to see something good come of all this.