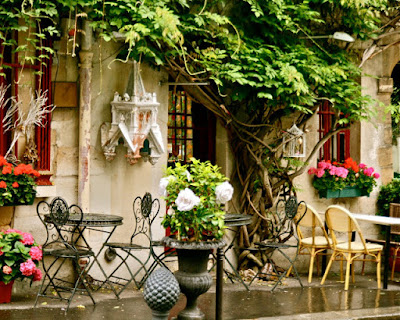 Long ago and in a universe far far away... or so it seems... I got all dressed up in a suit and heels each day for work, grabbing my purse and attache on the way.  Honestly, it is hard to even remember that life at times.

However, I loved the job that I did the last couple of years of corporate life.  Leaving it was only because I knew God was telling me He had something different and far better down the road.  My main responsibility was to help supervisors and their employees to better understand each other and to work more effectively together.

It didn't matter whether the boss was a foreman on the floor or the president of the company, there was always a challenge it seemed.  During training sessions for supervisors, a film was shown that has always stayed with me.  For it spoke great truth.  It was called What You Are is Where You Were When.  For it helped us understand the different way generations look at the same situation.

The "where" is the place you lived and the "when" of the title is... when you were ten.  Research at the time indicated that most of who we are is embedded around ten years of age.  For instance, when I was ten I lived in a small Midwestern town and my parents were older than most of my friend's parents. Which meant that I was most likely going to be far more conservative than a girl that age being brought up in Berkley, California to teenage hippy parents.

But that was only part of the story for the year in which you turned ten had a great deal to do with your thinking and what can be called your worldview... and this is where generational misunderstandings take place.

It was especially important for those in leadership to understand these principals in order to know what motivated their workers.  For instance, a man born in the WWII generation was often motivated by doing a good job and providing for his family while a man in his 20s was far more likely to be motivated by extra days off for he appreciated leisure time.

There were a few things that happened this past week which reminded me of my former self and old job.  For instance, I joined in on an online conversation about who we were voting for with my daughter and daughter-in-law.  While we agreed on the basics, there was some discussion on how to go about this voting process.

It struck me during this ummmm... discussion... that a lot of what was showing in the messaging were emoji characters with happy faces, winks, blown kisses, etc.  This is indeed how I discuss politics with "my girls".  It isn't that I don't care deeply about who wins an election but I care far more about my daughter and daughter-in-law.  I understand the generations do not always see things the same way.

One of the other things that happened was a news story about a very popular Christian author being dropped by the firm distributing her products (I can't recall if they were her publisher or not) because she has come out in favor of same sex marriage.  Something which she should not be surprised would be appalling to most evangelicals in charge of publishing houses and the like.

Her opinions did not surprise me for I have noticed all along that many of the well known thirty-something Christian writers were on the far left of middle. There were times I have seen what they were saying on social media and cringed.

Then there are the homeschool moms I know who are devastated when their homeschooled teens and twenty-somethings depart from what they have been taught. They thought that by homeschooling them there would be less influence from the culture.  But that is not always true.

We must remember what the world was like when each generation was growing up and that is where that training film was invaluable.  For most young people, it is not even a case of purposely wanting to hurt a parent or grandparent.  It is the affect of growing up in a society that has a different standard than we did.

Am I saying they are right and those who are older are wrong?  Heavens, no!  I still believe in the orthodoxy of Scripture and there are things written there that are right and wrong even if society doesn't agree.

What I am saying is this... it is far more difficult for the younger generation to abide by Biblical values when the very society they grow up in is pulling them in a direction away from these values.

If I thought a member of my family was heading down a very wrong path, there would be a conversation.  I know my family members do not agree with me on everything and that is fine for in the essentials we agree.  Except about Bigfoot.  Scoffers.

What we can do and must do is to pray for our younger loved ones and friends that God show them His Truth in all things.  They should be covered in prayer every day for it is not a great time to be a young evangelical.

Then again... perhaps it is.  For to take a stand for Christ is to make it necessary to truly believe what you say and to learn the Word and to become a person of prayer.  Where as when I was a child, even my non church-going parents stood by a Bible centered morality without knowing the Author of that Word.

I have mentioned this before but I think it shows us how the world has changed.  In the 1970s, there was a TV program I watched off and on before it was cancelled.  The reason for the cancellation?  Because the man and woman were living together without being married and viewers complained.

Fast forward to about a year ago when I was watching just a few minutes of the final episode of Glee and the female fiance of another girl told the girl's Christian grandmother that she couldn't wait until she died and everyone of her generation because they only spread hate.  Then the twenty-somethings were on stage singing something like What the World Needs Now is Love Sweet Love.  Sigh...

We need to keep communication flowing among the generations.  Even when we don't understand each other. Remembering that the culture has changed even if the plumb line has not.  I am certain those important to me know exactly where I stand on issues but I also hope they know that I would never stop loving them in those times we disagree.  Even if I am right.
Posted by Brenda@CoffeeTeaBooks at 1:41 PM

wow are you right on. I've thought these same things. Even having a discussion with a classmate from high school. I grew up in liberal California- not too far from SF, the classmates views are worlds apart from mine for sure. I know I was influence some by women's lib and my times.

I lived in a conservative area in the East. I moved to an area that was quite different. In oh so many ways of doing and thinking. I felt and still do in many ways, like I moved to a different planet. Now I know my own hometown has changed over the years too but still not as "far out' to me as where I am now. I have friends and relatives back there still. My plum line is still the same but since others plum line was so different years back it is still further different now it seems. I think when people say 'home' that is somewhat what they mean. People with like minded world views and thoughts. Although my children are a mix of both they have lived in this area and so have soaked up this areas views. To my concern. They say your friends have a big influence on your life and so do your relatives and friends have that on your children. Choose carefully. One person can only influence other so much when their 'side' is different than the minority. Going here and hearing from others with my views make me feel less out here alone. Joni

Deep thoughts. The standard has not changed, though I am certain that every single generation has tested the standard. You are a wonderful mom and grandmother who is more interested in relationship than being right even though you are. "Pray first" seems to apply here. I am struggling quite a bit with the entire Halloween thing and have been praying a lot.

I'm struck by your comment, "it is far more difficult for the younger generation to abide by Biblical values when the very society they grow up in is pulling them in a direction away from these values." I had not of this in that particular way as I struggle to understand why my youngest son sees no need for believing in God. It's not that he's "anti-God"; it's just not relevant in his life. Truly the world he interacts with every day is very much different that the world I lived in at the same age. Thanks for your insight; once again, my eyes are more opened by your words. And my prayers for him can be even more focused.

Wow! That idea of being shaped, more or less, by age ten, is very fascinating! It really does help me understand some older Christian relatives, who grew up in a time when (at least externally!) public American culture was somewhat informed by Biblical morality/values. (I'm almost 39, for reference.) I've grown up without that expectation, so I'm just not as upset about certain things as they are. I grew up with the assumption that the church lives in a hostile world, as Christ promised, and I've never expected non-believers (i.e., most of the dominant culture) to behave like those who have been transformed by the gospel. Obviously I'm troubled and grieved by evil and sin, but I've always just expected those outside the church to live in spiritual blindness, and have grown up believing that it's the power of the gospel through the Holy Spirit that changes peoples' hearts and lives--not something achievable through political activism. This way of thinking about generational mindsets helps me to understand older Christians who may have a more emotionally intense reaction than I do to certain cultural/moral trends, or who may expect political institutions to somehow address these issues adequately. Thank you for such a thought-provoking post!

You are wise to focus on relationships and on where there is agreement. Thank you for sharing about that training video you used in your corporate job. I'll be using that information!

I have a homeschool article due tomorrow for our state magazine and I may quote you, Oh Wise One! :)