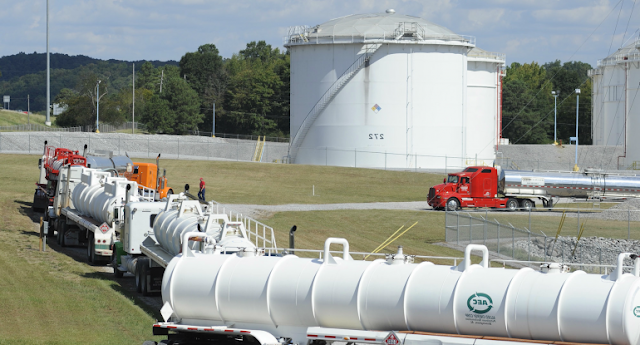 One has to be living under a rock to escape all the unsettling news recently.  I awoke this morning to news of another mall shooting, there are race riots in yet another city, and a broken pipeline sent the cost of fuel in the south sky high for awhile.

Although I had to smile when a dear blog friend messaged me saying the first thing she thought of at that news was how I've been warning about possible disruptions in transportation affecting products getting to grocery stores.  Actually, that realization came long ago from Holly Deyo who believes it is not only a possibility but a probability some day.

Here at home I've been chipping away at my To Do list and getting quite a lot accomplished.  Just a little at a time.  This morning I told my husband that I don't think he realizes just how much I do get accomplished because I do it all so slowly.  ;)

Although it has been unseasonably warm this past week, cooler temps are again in the long term forecast and the calendar tells me the heat won't last forever.  So while the hose is hooked up to the spout in the back of the house, I spent some time yesterday giving the back windows and the windows in the French door on the deck a good wash down.  It is not something I want to do when it gets cooler.

When I returned to the house, I checked to see where Victoria was sleeping and fortunately she was on my bed.  I shut the door to keep her from escaping and was able to open the deck doors and take some Mrs. Meijer's honeysuckle window cleaner to them (after years of using it, I'm almost out!).  Just a small chore that took less than an hour total but one I'm relieved is complete.

This week while waiting for cooler temperatures to return outside, I also dedicated time to getting my new-to-me Study computer all hooked up and to complete the installations, downloads, uploads, and getting the computer to talk to the printer in the small home Office.  I'll share more about the story of the computer later this week but I am pleased to say I am typing this blog post on it while my Appalachian Hymns CD is playing music through the computer. Good Stuff, indeed.

As you know, I follow a few prepper blogs and listen to some alternative radio programs (the latter only when I get a chance and if there is someone I want to hear on a particular broadcast).  There is a whole lot of chatter going that people should have plenty of food and water in their house prior to the elections.  That would be a very good idea.

Once again, one does not have to stock up for the end of the world if that is not what God is leading you to do... but having extra of what we actually eat for at least a month or so is always wise.

Think of the basics you would need and also think of food products that would be quick to make for those times the chief cook and bottle washer does not want to spend time assembling a meal.

I find it helpful at times to go to the grocery store when I'm feeling well and have more energy (usually in the morning) and just walk down the aisles to see what I could purchased at little cost that would be a great pantry food.  Some items like peanut butter and crackers are obvious, so are canned soups and canned protein (meat, fish, Spam... I actually like the Hickory style..., etc.), pasta sauce, salsa, etc.

But there are other options.  For instance,  I always make homemade granola but sometimes I make a trail mix for snacking of peanuts, dried cranberries, and a cup or more of good quality chocolate chips... or if I'm really wild and crazy... M&Ms.  If I use them then I use less of the dried cranberries.  If I'm making a trail mix for my husband alone, I'll add more various kinds of dried fruit since he doesn't have to be concerned with balanced carb content.

I've gotten such good ideas from looking closely at items I can use just on grocery store aisles, some to purchase and others to make at home... like the trail mix.  I also look for pantry items elsewhere.  A dear friend sent me a Starbucks gift card (you know my love of pumpkin spice lattes!) and I used part of it for yummy coffee and some of it for their Via instant coffee to keep in the pantry.

Like many of you, my budget is so tight it squeaks but I'm finding ways to add to the pantry.  A little at a time.  Here and there.  Everything helps, whether in an emergency situation or to stretch the budget by having on hand what we need without getting in the car and driving to the store.

The newscasts are a reminder that life is not what it once was here in the States.  It makes me remember the 1990s with nostalgia at how few huge news stories there were.  Boring... when it comes to news... is a good thing.  Sometimes I'll watch an old movie or TV show and think how it was made prior to 9/11 and how the world has changed since then.

Having said that... we are to do what God puts on our hearts, the work He has given each of us in these times, and then to cast our cares on Him.  He already knows what the future will bring.

Speaking of elections and all, if you are going to vote in the United States election and haven't registered, then time is running out.  I'm not going to write about politics or publish any political comments (since this is a Politics Free blog) but I am going to vote for the Party with a pro-life platform. A doctor suggested to my mother that she abort when she found out she was pregnant for me (in the 1950s!) due to her age.  I'm very happy she chose life.  Just saying...
Posted by Brenda@CoffeeTeaBooks at 11:57 AM

I thought of you when gas stations shut down here in North Carolina. And also happy that I got gas the day before they shut down! Thanks to reading blogs such as yours that help me look at things differently now.

I am so thrilled you were given a computer! God wanted you to have your own ;) I'm learning so much from you and Annabel (from the Bluebirds are Nesting) about deepening the pantry, etc. I'm taking heed of your suggestion re: extra water and foodstuffs prior to our elections. We live in earthquake country and fire season is upon anyway, so it's a good idea even if there are no problems near election time.
I have water in the garage, the hallway coat closet, our bedroom, and we have a couple rain barrels outside (thanks to reading Rhonda's Down to Earth blog). Gonna get some more, too!

A wonderful verse came to mind while I was reading your post that I wanted to share: "I have been young and am now old. But, I have never seen the righteous forsaken nor their descendants begging for bread." David, I think. Comforting for me.

I've been pecking away at my "to do" list here, too...
Many last minute chores as we wrap up the remodel that makes one of our rooms comfortable for my father as he comes to live with us next month.
I'm so excited for this transition - for him and for us.
What you wrote in large letters is SO wise. Thank you for writing your heart.

I'm so happy your mom "chose life" as well! Though it's rainy and damp here in Northern MN, the temps are still mild - 65ish. I'm still harvesting green beans out of the garden! The verse that came to mind on reading your last couple paragraphs, is Jer. 29:11..."...I know the plans I have for you..." Thank goodness we can rely on Him, and listen for His voice guiding us! God's Blessings...LynneinMN

I am stocking up a bit more now, as we had used some pantry items and I had not replaced them. I think its a great idea to stock up before the elections, too.

I need to give thought to the animals, too. We will be buying hay here soon, and the summer grass is dying back and I think I'll talk to Tim about extra grain for both chickens and horses. I like not having to go out if we don't need to.

So thankful with you that you have a computer! What a blessing!

Dear Brenda: I am so glad that your mother chose life! (MD)

I'm with you on the politics Brenda...I would not be here if abortion had been a legal option when I was conceived. I'm so glad you and I are both here! :)

Hi Brenda, Could you
provide a link or two to the conversations about storing up food/ water before election? Thank you, Angela

So happy your mother chose life too!

Your last two posts ring true for me. One of your comments mentions Jer 29:11 which I didn't know before today, but had paused to consider on a book mark and wrist band at a Lifeway store today. I passed it by because I don't like to think of God as an Atm machine to provide the things I need. But now I kind of think God is saying 'pay attention' when this kind of thing happens. I am turning 54 today and just learned in the last few days of an opportunity for voluntary early retirement at work --downsizing out the older employees. While I'm not ready for social security income od drawing on 401K payments, having a few months off with pay and benefits before finding a new less stressful and demanding job sounds like a true gift. The idea of finding that new job and learning a new job in my 50's also scares me, but I also had in the last few days I think another message from God. I was talking with someone on the phone about the type of work she did and if she liked it (it would be something like the less demanding job I would seek.) Her manager overheard her responses to my questions and asked to speak with me and tried to recruit me for a job and connect me with their corporate dept right then. It showed me that I have gifts to offer and that finding a job won't be impossible. God is good and mysterious.