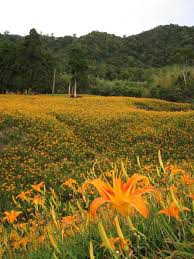 The country road I most often take to the highway has been laden with memories this past week.  I cannot drive this way without smiling and shedding a few tears.  For the day lilies are growing wild by the hundreds... as they do each year around Father's Day.  Just as they did in my childhood.  Which is why each Father's Day I honor my father with this blog post.

I don't have a lot of clear memories of my father since he passed away suddenly when I was only ten years old. However, one memory that I have shared with my husband and children is the clearest of all...that of Dad and the ditch lilies.

We lived in an old farmhouse when I was a small child. It had only enough land for a hand full of animals, some chickens, and a huge garden. It sat across from a grain elevator, at the corner where two gravel roads met. We had a few neighbors, mostly other smallish houses, what we would call "hobby farms" these days. Between us and the various towns in different directions, there were some "real farms" where one would find acres and acres of tall stalks of corn or soybeans growing each summer.

Train tracks separated our house and the tall grain elevator. To this day, I love the sound of the train whistles in the distance. You don't hear them much around here anymore. I remember taking walks with my dad along those roads when the evening had cooled enough to make the gravel more comfortable...for they can get quite hot for little feet. Dad was around 6'3" tall and I was but a little girl when we lived on this gravel road. So it probably is understandable that my memories of both him and day lilies are that they were both huge!

We didn't call them day lilies in our neck of the woods...they were always known as ditch lilies, for they grew wild in the ditches each summer. That's why I was thinking of him this week. It wasn't the gorgeous yellow day lilies growing along our backyard fence, nor the orange lilies next to the house, both planted by previous owners. It wasn't the lilac colored day lilies my husband planted this year. No, it was the old fashioned deep orange day lilies growing in the ditches on the roads I travel most of the time...the roads that take me "to the country". The same kind of lilies that sent us out for a walk in the evening...on gravel roads.

My dad was not an educated man as such. He only finished 8th grade, a practice very common to men of that and previous generations. Back then, many boys had to leave their formal schooling at that age to begin working. However, he knew a lot about the important things of life like flowers, and building things, stopping on trips to take pictures of animals in the field and whatever else grabbed his attention, hunting, fishing, and how to love daughters. People who knew him used to talk about his kindness.

I've been told many times that he cried when I was born because he had wanted a little girl so badly. Since this was a second marriage for both (he being divorced many years and my mother a widow with seven children when they married), and mom was well into her 40s, my siblings thought their mother had died giving birth only to find out he was crying because they had a little girl!

I only had him around for ten years but I learned a lot from him. Not so much in formal learning but the kind that is absorbed by small children, those lessons we pick up when the older folks don't know children are looking and listening. I've been called a kind person, that's definitely from Dad. I love flowers, gardens, creeks, and small creatures of the woods...definitely from Dad...although I prefer to admire the small creatures from a distance rather than having them for dinner. :)

I never had a chance to say goodbye but I've prayed for years that in the hours Dad knew he was dying, he remembered the Gospel and made peace with his Creator. How I would love to know that the tall, gentle man with the hands calloused from "building things" would be there waiting for his girl. I'm certain God will let there be plenty of ditch lilies in Heaven.

Image:  Google
Posted by Brenda@CoffeeTeaBooks at 10:04 AM

Beautiful memories of your Dad.

I hope GOD will someway give you assurance that your Dad will be in Eternity waiting for you. It surely sounds as if GOD was a part of his life...where did the goodness and kindness come from?? My dear Grampie I never heard if he ever "converted" in the sense people expected...but a kinder more loving person I have never known!! And there is not a shred of doubt in my mind he awaits me one day...because if he is not there...no one will be!! I hope you feel that way about your dear Dad...and how fortunate you were to have had a loving kind one...how fortunate beyond words...how do I know? Because mine was often extremely cruel and harsh and anything but loving (and he never touched a drop of alcohol...and thought he was the best Christian on this planet). Mental illness no doubt...what else could that be? But I had a superb mother and her parents who were everything a follower of GOD ought to be. And with no trumpeting themselves from rooftops, EVER!! Today is a mixed day of emotions for me as well...but different from yours. Elizabeth in WA

Beautiful loving post. You have a wonderful way with words to paint pictures and elicit emotion. Your Dad sounds very much like mine -- their generation so different from ours today. We were blessed.

Wow, this is beautiful, my friend. What a lovely memory to hold in your heart. Pam (SD)

How interesting that among your memories is one that is reinforced every year....♥