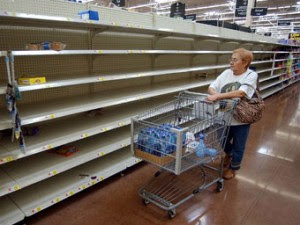 Unless you are living under a rock, you probably have been hearing about the food crisis in Venezuela.  A country once rich in oil money is now without the most basic essentials.  I've read a few articles about what is causing the crisis, there are many opinions but they all lead back to Socialist leaders (to what extent the crisis is manufactured and by whom seems to be the argument).

I don't write often about stocking up for an End of the World scenario for I have seen such stories have the opposite affect of deepening the pantry.  They can cause us to throw our hands up in despair and say we could never stock up in this way.  Very few people have the budget or the space for such an endeavor.

However, most of us could and should have enough essential items to get us through a temporary crisis.  Can such a thing happen here?  Could grocery store shelves be empty? Could there be a crisis which brings in the military as in Venezuela?

I have one word for you... Katrina.  It has happened here.  I heard an interview given by the head of one of the faith based programs who was among the first to arrive after the hurricane hit.  He said there was total chaos until the military showed up.  In a major U. S. city.

The most likely scenario the average American could go through is long term unemployment.  Been there.  Done that.  I can assure you, the time it happened when I had a well stocked pantry (including essentials) was a whole lot easier than when I didn't.  It doesn't help to have a grocery store full of food down the road if you have no way of purchasing the food or any other supplies you need.

I know most of us don't want to think about scary things happening.  Only a handful of readers follow the websites I do that are full of the "what if" scenarios... and I understand it.  I've mentioned before that I can read those with no problem but put me in front of talking heads debating politics for five minutes and I come away with a serious twitch.  Especially this year!

The thing is, we do live in a fallen world and every one of us is subject to an environmental or man made crisis.  Obviously we will be affected the most by a local crisis but I remember immediately after Hurricane Katrina hit the Gulf Coast, some trucks carrying food and essentials were diverted to those Gulf states.

A good friend lives in New Mexico and the store where she shops had shortages due to those trucks being diverted.  Many hardware stores throughout the country had a hard time getting plywood and some construction items because of the massive rebuilding that had to be accomplished in the Gulf states.

I know some people are tired of hearing this but it is so simple, just by putting back some extra food and essentials you can keep yourself from having to be put in a bad situation and becoming a victim.  If you have what you need put back, you don't have to drive in the middle of a blizzard.  If you already have some essentials handy, you don't have to stand in line for hours before or after a hurricane.  Should there be a power outage, you have some water on the shelves so you don't have to stand in line for one gallon of water.

I'm going to revisit soon what I learned long ago in reading about war town Europe in WWII.  In the meantime, the following article is interesting.  It has information about what one can learn to have in your pantry from the crisis in Venezuela.

My husband and his family lived in Hungary after WWII....They had no possibility of deepening the pantry, they could barely live day to day. They did have help from CARE and my mil felt that had saved them a few times....Usually they at least had bread. But Paul remembers friends who went days without even bread. Or even potatoes....But one resource they had (besides their own work and trying to raise food) was the kindness of neighbors. There were neighbors who would show up with a little extra food for them. (My fil was in a communist jail. My mil had ten children, some adult, and a mother in law to provide for.) I was trying to think of a way one could think of this resource as a deepening of the pantry, but all I could think of was to help others in ones community when they needed help and one had something to share. And this is something we are called to do, I believe.

We have a little bit of food stocked up; you are smart to have a deep pantry because, well, life happens.

I agree with you and as Thickethouse said to be able to help others, is a very good reason to deepen your pantry.

I do stock up some, as we are able. A little bit at a time is better than nothing.

I'm off to read your link.

Great article! Thank you. It is so easy to take for granted that things will go on as normal, and that isn't the case at all. We've been deepening the pantry slowly for 3 years now. Every little bit helps. Also learned how to pressure can, and canning beans, venison, and even vege beef soup has helped so much! God's Blessings to you and yours, and thank you so much for your blog! LynneinMN

Brenda, I read the article on Venezuela and have to say it is sobering to think we, along with the rest of the world are headed in the same direction. Though I can read articles like this and not get freaked out, it does have me going over my pantry to see where I can add to it, or if there are any holes that need to be filled.

Thank you..again..for the timely reminder that we all need to prepare the best we can.

I look forward to your coming article on what you have learned. I didn't realize Venezuela was in a crisis! That is what I get for not listening to the news! I continue to set a little bit aside each paycheck and it really does help in building a stocked pantry. I live in a very small place so I need to figure out how to be a bit more creative for storage.

About 7 years ago my husbands company moved out of state, we were lucky for a few reasons 1. We knew it was coming and 2.I have always kept a little extra on hand at all times.With raising 7 children going shopping and meal plans had to be well organized. It is just my hubby and I now but he is retiring next spring. I plan on continuing on having a well stocked pantry. I see the news reports and my heart goes out to them all.I feel we all should be some what ready for a time frame of being able to feed our families.I'm sure a lot of people never thought it would happen to them.You have said many times it only takes a little bit here and there to have a stock of some food items.