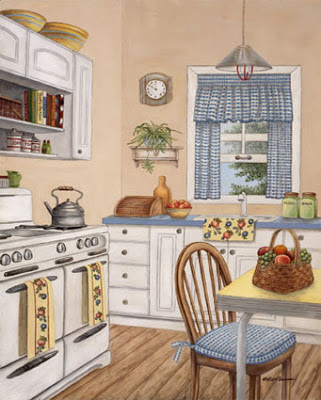 Next time I will leave out the onion soup mix completely and just add dried onion flakes.  That wasn't the first time I've noticed what is being sold today is not quite what it once was... whether in taste or size.

Of course, we have to eat so much "cleaner" than we once did that we are also probably sensitive to the amount of sodium in these mixes.  Most items in my kitchen are made from scratch.

My husband was once a person who mainly wanted meat and potato meals, mixed in with a casserole here and there.  For that was how his mother cooked and most moms of that generation.  So for a long time our meals were centered around protein in the form of beef or chicken or pork.

However, with the changes in our dietary demands, I'm making far more vegetarian meals these days than those centered around meat.  I now buy for a month the amount of meat I used to buy for about a week and a half.  Partly for dietary reasons and partly because the cost of high quality meat has sky rocketed.

So for awhile now, I've been tweaking the pantry to include more vegetarian style options.  I've written about experimenting with various types of spices (where was sumac all my life?).  I don't think my mother had ever heard of garam masala and the only sumac she knew was poison... not the spice.  However, it has been fun and I have inexpensive options to try a little at a time, whether buying bulk from the health food store or at a local Asian market.

My most recent pantry tweaking has been in the form of vinegar and oils.  After hearing many of my favorite TV cooking teachers talk about sherry vinegar (Sarah Moulton says it is her favorite vinegar), I finally ordered some from Amazon.  I had been looking for it at stores for years.  Apparently it is getting easier to find but not in my town.  Want something Asian?  You will find it here.  Mexican?  There are specialty stores.  Indian?  Look at the Asian market.  Etc.

I thought I'd like sherry vinegar after trying sherry for the first time in a beautiful West Virginia Bed & Breakfast.  The owners, in typical Southern hospitality, had a carafe of sherry sitting out with beautiful cut glass glassware for guests to help themselves to a sip each evening.  I did.  I loved it.  My Southern genes were quite happy.  Sherry vinegar is made in much the say way as sherry.

I first did a little Google research on the ways people use sherry vinegar (and in Spain it is on everything it seems, like balsamic vinegar in Italy).  So this past week, I had leftover steamed green beans I wanted to freshen the next evening and I splashed just a little sherry vinegar in them as they reheated in butter.  Oh, my.  Yum... and Mr. Picky my husband thought they were great.

I've been playing around with vinegars for a long time.  I think the first out of the ordinary vinegar I tried (at least it was new to us) was seasoned rice vinegar.  This was back in the 90s and it was just being discovered in the States, about the time sushi was getting popular.  We loved it!  Although we now purchase regular rice vinegar (without the sugar of seasoned rice vinegar), it is still our go to vinegar for salad dressings.

These are the kind of pantry items that are helping me bring flavor into a completely different way of cooking than I once did... and learning new things is fun.  Oh, I still assemble the occasional casserole and just last week I made fried chicken (although these days I cut the chicken breasts into two servings).

I love unique pantry items and how a small amount of money spent on a new seasoning, salt, spice, herb, oil, vinegar, etc. can turn humble ingredients into a yummy dinner!

Q&A
I was asked how long dried beans last?  They are best the first year but after that they are still edible but they take longer to cook.  I have heard there comes a time when they get too old to ever soften but I have never had that happen.

Do I wash canned goods when I bring them in from the garage?  I actually do unless I just recently purchased them.  Our garage attracts unwanted guests that sometimes leave behind evidence they were on the shelves (yuk) so I do wash the top of the cans with soapy water before opening them.  I don't obsess over it but a quick sudsy cleaning will certainly help prevent illness and it won't hurt.
Posted by Brenda@CoffeeTeaBooks at 6:21 PM

Which sherry vinegar did you order from Amazon?

Me, too (the vinegars, oil & spices)! I have not tried sherry vinegar yet...
I still enjoy casserole recipes. Usually cut meat by 2/3 and frequently make in the crock pot now...
I guess you could say I'm "evolving".
We do eat out more at our local cafe. When we do, a snack of fresh veggies and fruit serves as our other meal..

Interesting things to ponder! I am sure you are right about more sodium being in mixes. For a while I was buying more tv dinners but am back to cooking from scratch. I like to cook a larger amount of some things and use it in meals for a while. Usually I use the original Japanese vinegar which seems a bit milder. I also like to make my own tarragon vinegar........And it is not only your garage where "critters" show they have been. Food warehouses don't have a good reputation! Happy Mother's Day, Brenda.