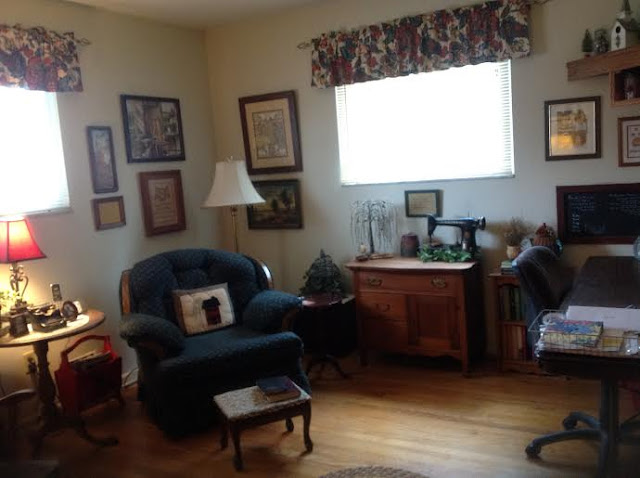 You may remember that my Word for the Year is... Anchor.  I felt that the happenings in the world, wars and rumors of wars, terrorism, the sense that life was out of control, the need in my own life to set my face firmly against the winds of adversity... that would all require an Anchor.

As we are mid-way through the second month of the year already, it has turned out to be a good word.  Anchor.  In a Person.  In decisions.  In everyday life.

I admit, when first pondering the word, I thought more of the big anchors of life.  Faith.  Family.  Friends.  Jesus.  Especially Jesus.  But what I have been finding in these first weeks is that the big stuff is made up of a lot of little stuff.  For a matter of fact, it is the little stuff that has been the source of my anchor.

Let me explain.  I've been tweaking my Study for years now and while it was looking more like what I wanted and less like Christopher's old bedroom... something was lacking.  It wasn't as warm and cozy as I desired.  So I've been thinking about changing the lace curtains to valances in a richer color palette.

For the past six months or so, I'd skim the section of Goodwill and the Mission's thrift store where they hung valances, napkins, aprons, bits of fabric, and the like.  Last week there were two valances that caused me to wonder... could this be what I needed?  Would these work?  The discount brought them to $2.00-ish each so I figured they were worth a try.  I did.  They were.  Lovely.

They were purchased while in the midst of some furniture reworking which required moving the little bookcase filled with my close friends (Goudge and Stevenson) out of where it has been for ages and into the Study.  That change caused a move of the little oriental cabinet, which caused a move of the vintage red magazine rack, and... wallah!  Each little change came together to form exactly what I have wanted all along.

The Study is one of my anchors.  The place where I can go for quiet when the storm clouds are brewing and the winds of adversity (whether real or imagined) are blowing hard against the feeling of calm.  Little changes brought such a big result in the look of the room and to my soul's quest for calm.

There have been other little decisions here and there which... I think... have brought results larger than what one would expect.  I'm not much of a breakfast eater (unless I'm at a restaurant where someone is doing the cooking and serving and then it is my favorite meal "out") so I tended to grab something high carb like a bowl of Cheerios just so I could take morning insulin shots.

A small change I made was to begin purchasing oranges since they were in season.  Not to mention I could use the extra Vitamin C each day.  So I've been starting my day with two string cheeses and one large orange.  Enjoyed slowly along with morning coffee.  That one very small decision added vitamins, nutrients, and actually enjoyment in nibbling away at breakfast... and I didn't have to cook while half awake.

I have known this Truth for decades so I don't know why it tends to slip from my everyday radar.  That the big stuff of life is really made up of many small choices.  Those choices will result in good and ummm... not so good.  According to what they are and how they affect us.

String cheese and an orange decision... good.  A pastry for breakfast decision... not good.  Unless I'm on vacation when I throw caution to the wind and take extra insulin.  But I'm talking about the day-in day-out everyday things I choose to do or not to do here.

There was one day last week when I was feeling quite on edge.  It was in the midst of the launch week for Sally and Sarah's new book and all the hoopla it required (which I was happy to be a part of), the new computer for the tiny home office, lots of books to read and review, books I really really wanted to read just for enjoyment, past due letters to write, phone calls to make... and this was winter when no outdoor chores were waiting.  AAACK!

Since I had dishes soaking, I decided to turn off any other form of distraction and pop a classical music CD in the player I keep in the kitchen.  A very small decision but a good one for as I was washing the dishes and rinsing them and loading each one in their home on the dish drainer... the music brought such peace.  After the dishes were all washed and the stove cleaned and the counters wiped down... I felt like a hundred burdens had been lifted from my shoulders.

As I pondered the affect of the music, I thought of how easy it had been to decide for music and against the TV in the background.  I made the decision right there to choose listening to music more often.  I know that sounds silly but I tend to go through the day on auto pilot without making a conscious decision for something like... turn on music... or, click on that latest podcast I've been wanting to hear... or to turn on the Christian radio station.

I do believe it is part of our human nature to not consider those little anchors in our life.  We look for and expect the big stuff.  We don't often stop and ponder what small decisions will change our life.

I once read a story of a politician who had lost fifty pounds and looked so much better.  A reporter asked him what kind of magic diet he had been following and he said simply... I stopped eating a big bowl of ice cream each night before I went to bed.  Amazing.  One. Little. Change.

This is so true!

Small things add up to big things. We can chose what we surround ourselves with and what kind of imput we are getting. Changing out a few small things lead to peace and sometimes to weight loss. ;)

Thank you for these wise words. The Lord is using them and some others to remind me of somethings I had lost sight of.

Good reminder that it's the little things in life that sometimes make or break us. My word for the year is "courage" and "faith". Well, that's two words but in my mind they have to go together. I think we're going to need a lot of both to get through this year and to feel "anchored".

Enjoyed reading this post,it did My Spirit good : )

Loved this one, Brenda...and a wise choice eating oranges over cereal!! We are always working on better choices too, even tho' we have diabetes 2. I am always working at adding more nutrition to things...and homemade baked goods, being I need gluten free anyway, are much more nutritious than wheat ones anyway...even bad things in our lives, can help us in making better choices I think...a small serendipity I suppose.
Elizabeth in WA

I like the word you chose for your year and how it has affected how you are looking at things and the choices you are making.

When I feel the need to make those little changes, I call them my "If you give a mouse a cookie" moments. We've had some very difficult moments of late as a family and tweaking the house, knitting dish cloths, sitting with the kitties while drinking a cup of tea have added to my sense of security and serenity. My word of the year has been "Mercy" yet is hasn't quite felt right. It's okay to change the word if I feel a God whisper, right? The curtains and room look lovely and warm, well done :) Blessings dear Brenda.
Donna

Scripture says its's the little foxes that spoil the vine. I guess that can work two ways. It is also sometimes little things that can make our day and give us such joy and pleasure. I love your thoughts on this and love, love, the new look in the study. Very pretty and inviting. Blessings, Sharon D.

Miss Brenda, the small choice of music instead of the noise of television is a GREAT suggestion! I tend to leave the tv on and it becomes a "clanging cymbol" instead of anything that nourishes my soul. I love your study!

Thanks so much for another good visit, Brenda. I love your study--I have been working on mine in little ways since I have an extra room now. I told you earlier that I chose to use (steal) the word "anchor" this year too, and more music is one choice I have made.

Thanks Brenda for such a thoughtful post. I love your study, it looks so warm and inviting! Your so right, it often is the "little" anchors that keep us going. It really helps to be reminded about that.
Thank you,
Pauline

Very well done....Be well! Be anchored! You are making good decisions, I think. by their fruits you will know them.

Good word! How fun for you to finally get your study the way you've always wanted it! And how nice to have your own quite space for crafting, reading and pondering, etc. I share my "craft" room with our "library" and it is quite cluttered, to say the least. Your special room looks so warm and inviting and uncluttered in comparison! Sigh.....I really need to do some serious purging and downsizing. I guess even doing a little at a time is, at least a start, right?
Thanks for sharing!
Blessings,
Laura C. (WA)

Lovely words to think about, inviting study also. Walk in, take a deep breath, and slowly let out a sigh!

Your room looks so cozy.
The little things make such a difference, don't they? And they add up to the big things over time.

This was so good!!! I've been making small changes and I am noticing what a difference they make.

Beautifully written.
I totally agree, one should find such simple changes that change ones day or life.

Another lovely post, Brenda. Since I've cut down my internet surfing yours is only one of two blogs that I read regularly for encouragement. God bless you!