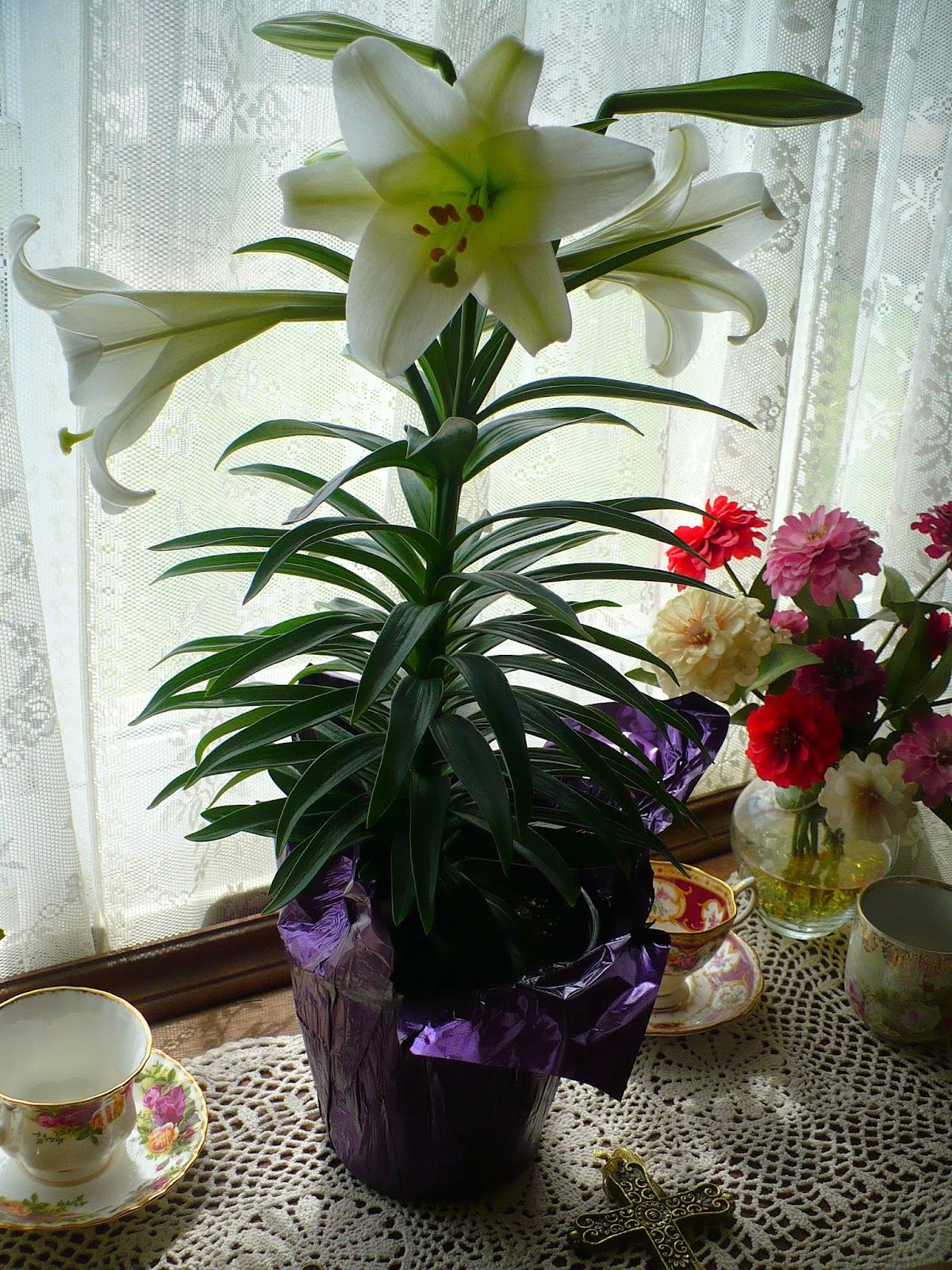 And if the Spirit of him who raised Jesus from the dead is living in you,
he who raised Christ from the dead will also give life to your mortal bodies
because of his Spirit who lives in you.
Romans 8:11 NIV

I hope you don't mind my Easter ponderings a little late.  There wasn't time last weekend for putting ponderings to pen but they have continued to float around that part of my brain where ponderings tend to remain... if not written pen to paper or keyboard to screen.

Easter is my favorite holiday on the Church calendar for thinking of what Jesus accomplished.  I must admit that Christmas has never been my most spiritual of holidays.  I find it the glitz and glitter and sparkle much needed in the bleak (almost) midwinter.

Oh, don't get me wrong.  Christmas has been Christ centered since I became a Christian in my mid-teens.  But I rarely get any deep spiritual thoughts during Advent.  Perhaps because it has been a long time since I was involved in a liturgical church (albeit once a Presbyterian, always a Presbyterian in my heart).

But Easter?  It is ground zero of Christ and His coming and His death and His resurrection.  Now, I don't have a problem (but I know many who do) about making up Easter baskets and books about bunnies and stories of duckies and little lambs with cute ribbons around their neck.

You may remember, my daughter thought of me when watching Miss Potter.   I have a thing for inanimate animals coming to life in my imagination and the thought of an Easter bunny bringing Spring cheer is just too darn cute to pass up.

Even if it takes on the same family legend status of a chubby guy in a red suit who leaves candy and an orange in one's Christmas stocking... all done with a wink wink attitude from Mother.  Fun stuff.  Make up stuff.  To add a little sparkle to life.

My children knew Peter Rabbit was make believe just as much as they were aware of pretend games when they were very young.  Such as my daughter and I searching for Pooh sticks in a creek in between her elementary school and home.

But Jesus is not pretend.  As Tolkien finally got through to Lewis... Jesus is the Real myth in the midst of all the fictional myths.  Jesus is The Story!  It really is all about Him.

Christmas brought about BC and AD on our calendars but it is the Resurrection that changed the world.

The Resurrection is why all of the apostles but "John the Beloved" were martyred.  I'm certain there were times John would have wished he had given his life already, especially as in his 90s he was sent to the Island of Patmos.  He truly suffered for his risen Friend.

They all knew Jesus was born and died and lived again, otherwise they would not have put their own lives on the line.  They could die for Him because they would once again live with Him.  Because of the Resurrection.

But there is much more to the story of resurrecting than dying for Him.  Without it, we could not live for Him day in and day out month after month and year after year.  It is absolutely impossible to live the Christian life without Christ and His Resurrection power.

The couple of weeks leading up to Easter this year were pretty miserable physically.  For one of those weeks, I had no strength at all... already in a human flesh that doesn't have a lot of physical strength.

But I kept pondering this whole idea that the Holy Spirit lives within me.  That same spirit that raised Christ from the dead.  I thought of how Christianity really is not about religion but about a Person.

He told his disciples before his physical death that He had to return to the Father so the Comforter could come to us.  After He took our sins upon the cross and became the Lamb for which He was born to die.  He took back the keys to the Kingdom.  He conquered death for Himself... and us.

That is not a religion.  That is Gospel Truth.  And if you believe it and accept Him as that sacrificial Lamb and accepted that Truth... you have within you always and for the rest of your life the Hope of Glory.  Not to mention that Comforter He sent you.  Our Teacher. Our Friend.

Resurrection power... sometimes we may actually feel it raging within us as we have the strength to keep going when we want to stop, or we love the unlovable, or forgive the one who on our own strength would be impossible to forgive, or just wake up the next morning and go about our daily tasks when life is just-too-hard.

He is also there to give thanks when we have to thank someone for the beauty of a sunset, the taste of really good coffee, an afternoon pot of Paris tea and a really good book, milk chocolate that melts in your mouth, the first daffodils of Spring, walking through a forest, sitting by the beach, the Hallelujah Chorus, the smell of a freshly bathed baby... and all that is beautiful in life.

And to think... these are just the "Shadowlands".  He is still the Carpenter, you know.  Contracting and designing and building our dwelling place in Heaven.  All because of the Resurrection.
Posted by Brenda@CoffeeTeaBooks at 11:21 AM

Amen, Brenda. Christ is it!!!! Nothing else even comes close. :)
Glad you are feeling better these days and pray you have an even better day today!
Mary S.

Your should have been in a pulpit somewhere bringing this message of resurrection hope and power. Very good. His is Lord of Lord and Kings of Kings--soon coming King! Blessngs, s
Sharon D.

Wonderful, Brenda. Makes my heart skip a beat (in a good way)! Glad that you are feeling stronger.

I too have been pondering the fact that the Holy Spirit lives in ME.

Thankful for the resurrection and for His mercy.

So well said! A hearty "Amen" from Arizona for this post! Thank you!

Truth! All you wrote about Him. He is our reason for living. Well, my DH has come down with what you're recovering from. God continue to heal you (and him ).

So beautifully said. Thank you.

Once again you get to the meat of the subject in such a unique way. Thank you ... and prayers for your continued better health.