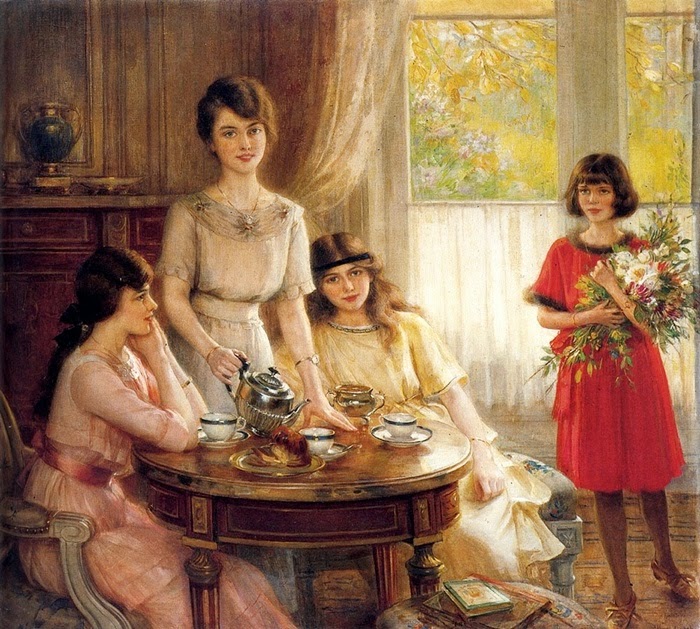 Sometimes I wish there was... somewhere in my immediate surroundings... a Narnia like wardrobe or painting in which I could enter another world.  One with Mr. and Mrs. Beaver serving tea as well as majestic lions bringing about the end of a winter with no Christmas.

Of course, knowing my own failings as one does over the years, I would avoid the wardrobe like the proverbial plague because adventure is the last thing I need with a chronic illness.  Give me my sofa.  And my pillow.

Instead, God would have to pull me into His Adventure through something like... a painting.  One in which I was deeply intrigued and while closely looking at brush strokes and the use of color... suddenly awash in an ocean of another world.

That would certainly get (and keep) my attention!  But in this world, God does not work that way.  Instead most often He nudges at us gently, more like Mrs. Beaver than Aslan.  There have been times in my life in which I am certain I heard the roar of the Lion of Judah at work in circumstances.  But mostly He speaks through His Word.  And circumstances. And little nudges.

That is what He is doing with this whole focusing thing going on.  I have walked with Him long enough to know if something keeps floating to the surface of my thinking, it is usually Heaven inspired.  Especially if it brings with it a Holy apprehension and not an earthly fear.

I started reading a rather big novel last week and had a bit of an effort getting past the first quarter of the book.  Once I really got into the reading, I loved it but before that time... everything distracted me.  From the sound of the winter winds beating against the window to the gentle breathing of the Maine Coon kitty curled up on the back of the sofa between the window and me.

I read somewhere... a magazine or online or in a blog or perhaps while Googling something else entirely... that technology is much to blame for our distractedness in this the 21st Century.

I would agree in some instances, for if I'm reading a book on the iPad using the Amazon app, the instrument in hand seems to think I need to know when Jill has pinned something on Pinterest or Jane has sent an e-mail.  Albeit I may be waiting for an e-mail but usually not.

Technology is a wonderful thing that we so often take for granted.  Recently I missed part of a Joel Rosenberg interview about his new book on a program that I very much wanted to hear.  All I needed to do was click on the app for that network (which is downloaded already on the iPad) and choose the previous day's program for which to click and listen to the interview.  On my sofa.  Anytime I so choose.  Amazing.

My mother was a child when most people continued to use the horse and buggy for transportation.  She remembered when her father purchased one of the first automobiles in her County in Kentucky.  That was not all that long ago you know.

The main thesis of the article said our brain was meant for slow days and slow work and the slow passage of time.  It gets confused in this speed of light world in which we live these days.  A world where one can have hundreds and hundreds of books on a small electronic device (most of which were absolutely free).  A world with too many options.

It gets... distracted... until it reaches a stage where we find it difficult to focus on anything for long.  Definitely.

I don't want a complete return to the 18th or 19th century.  It is good to drive down the road to Kroger when I have forgotten to put milk or eggs on the grocery list.  I very much enjoy listening to a Christmas concert live on PBS from the other side of the world and indoor plumbing is a miracle of the ages.  As a preschool child, I lived in a rural home that had indoor running water but one had to use the facilities... out back.  Not fun out in the country for a child with a vivid imagination.

But there is something to be said for bringing back some of the old ways.  Slow food simmering on the stove, developing flavors over time.  Homemade bread allowed to rise on the kitchen counter next to the stove in winter.  Conversations with no hurry.  The reading of a long novel as one's head lays on a fluffy pillow and whose legs are covered by an equally fluffy cat.

I do enjoy a proper tea where the teapot is swished out and allowed to steep with very hot water from the faucet to prepare it for the job to come.  This happens as one keeps an eye on the steam in the tea kettle to make certain it does not begin to sing if using for green tea and letting it come to a full chorus of song for black and herbal blends.

So much nicer than nuking water in a mug and throwing in a tea bag as my husband is prone to do.  Although I do use tea bags most of the time for the good tea bags are quite convenient and keeps one from having to dig wet tea leaves from the spout of the teapot... but I digress.

I was watching the final season of Larkrise to Candleford again recently.  The entire series but especially the last two seasons centered around the theme of change as the 19th century was ending and the 20th century was about to blossom.  It is quite fun to watch how the different people in the village and town react to the inevitable change.

My favorite is Queenie who has pretty much lived long enough to come to peace with her surroundings.  She holds on to the old ways, making lace by hand and using herbs to cure the sick.  But her advice is often to consider the new ways and learn how to live within them... for "progress" will not be stopped.  While cherishing that which is good from the past.

So this year, as I relocate my ability to focus, I am paying attention to the still small Voice and to the wisdom of Queenie by finding a balance in all of it.  To live each day with an intent to focus instead of letting the World define who I am and what I do and how I go about doing it all.

Hallelujah.  And Amen.  So be it.  And we will chat about it more in coming Sundays.


Image:  Women at Tea by Albert Lynch
Posted by Brenda@CoffeeTeaBooks at 11:04 AM

I love this post and think I would enjoy chatting with you and enjoying a pot of tea, made in a real tea pot.
Queenie sounds like a wise woman, and maybe I will watch that series in future. Slow times, slow days, the word "slow" has a peaceful ring to it. Soon I will head to church and then come home for the Packers / Cowboys game.

What is the novel you are reading?

What novel are you reading?

What novel are you reading?

Beautiful post, Miss Brenda. I think God uses the shortened days and winter cold to force us to slow down. Technology has invaded the natural pace of seasons, I fear. Thank you for this lovely written reminder.

Wonderful words. I've read a number of blogs today about slowing down,shutting off social media and just enjoying the day. Joel Rosenberg is one of my favorite authors. Love his books.

Lovely post, Brenda. It is so important to slow down and enjoy the simple things in life.

Oh yes - we love slow. My seventeen year old daughter and I have been watching Cranford again, and Queenie from Larkrise is a sweet soul friend of ours too.

I have noticed the same for me. Distractions abound!

I try to find a balance in it all, as I love simplicity, and I love technology!

You are SO right about TOO MANY CHOICES. I have hundreds of free books on my Kindle and have read a few of them, but certainly not all of them. And I DO find it hard to spend too much time on any one thing - after all, time is going so fast and I only have so much of it - and way too much of it is spent earning money outside the home......sigh.

You are SO right about TOO MANY CHOICES. I have hundreds of free books on my Kindle and have read a few of them, but certainly not all of them. And I DO find it hard to spend too much time on any one thing - after all, time is going so fast and I only have so much of it - and way too much of it is spent earning money outside the home......sigh.

I enjoyed the balance you brought to this. But the simmering soup, homemade bread and fluffy pillow, fluffy cat imagery was particularly appealing. Thank you for this reminder. Fresh bread and soup sounds like a delicious and cozy dinner on this snowy day in Ontario. xo

This is a dilemma for those of us that treasure the past. Slower days, deeper relationships, actual conversation and yet cell phones, texts, emails, and advertisements constantly bombarding us and distracting us from the very things we treasure. Sigh..

The knitting is done -- just a little bit of flower sewing needed!!! And you shall be drinking tea just like Mrs. Beaver!!! :) I've got Lark Rise to Candleford on hold as a book right now because it kept being quoted in the book we are reading for our Victorian England studies. Can you think of a more fun period to be studying right now?!! I am loving it! I even got the two younger boys introduced to lacemaking and one of them has taken off with it!

Another beautifully written post, Brenda. One of the benefits of growing older is this ability to weigh our options and make better choices, to savor life. (Which reminds me of Shauna Niequist's upcoming book. I'm sure you are as anxious as I am to read it!)