Sunday Afternoon Tea - Making memories for the family and friends 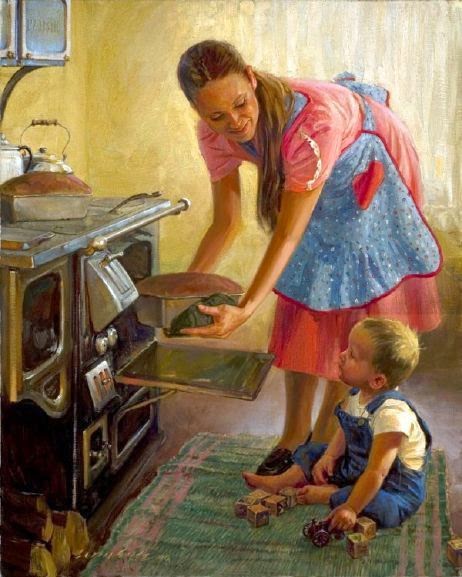 I think like most of us, the Holidays bring back memories from past years.  For me, I think often of the old Downtown of my childhood.  Before the Mall was built.  When J. C. Penny and Woolworth's were across the street from each other.  When the County Courthouse was not only decorated with lights but it was open, no one thought of blowing up a Courthouse in those days.

And there were public restrooms that also had a reading area and on the walls were shelves that offered free Christian tracts for taxpayers to learn about Christ.  In a government building.  And the Salvation Army bell ringers stood beside the red buckets on various corners.

Did you know the song, Silver Bells, refers to the Salvation Army bell ringers?  It is one of my very favorite Christmas songs because it reminds me of Mom and Downtown and being a little girl when the world turned to a magic place and the joy that the ringing of those bells brought to shoppers.

Memories.  Good memories of a simpler time.  When "saying grace" still occurred on TV shows and no one even hinted that Christmas was a "Winter Holiday".  Society was not perfect by any means.  But it was based on the morality of the Ten Commandments, which still hung in school rooms throughout the country next to paintings of old white men, otherwise known as the Founding Fathers.

But there is something about those memories that went with me each day my children were young.  Because I wrote out a reminder and stuck it on the bulletin board.  What profound Truth did I not want to forget?

These are the good old days!

For you see, for my mother our Christmas trips Downtown were enjoyable but I know she didn't even think of how this was building treasured memories in her little girl.  She worked full time so Friday nights when the stores were open until 9:00... that was her opportunity to shop.  And stopping by Woolworth's for a treat was a much needed rest for a middle aged mother.

However, being the artsy bookish Romantic I tend to be... I realized as my children were well... children... that these were the days and months and years they would also recall from their own childhood.  These were their "good old days".

And since life was not always perfect and I knew there would be some not so great memories parked in the back of their memories, too, I made an effort to build memories of their good old days.  Especially on their birthdays and Holidays.  Especially Christmas.  The entire season leading up to the Big Day.

Christmas was always centered around Christ in our home.  There was always a tree but we are not druids.  We did not worship the tree.  We decorated it.  We enjoyed our favorite Christmas movies and songs but they were not the reason for Christmas.  They were additions which added to our festivities.

Baking cookies and making meals and inviting friends over for making the season merry and bright.  All wonderful.  All just additions to the Season.

Good memories to trump the bad memories inevitable in life.

But only possible because of the real meaning of the Season.  Oh, I know that Jesus was probably not born in December.  I am well aware the Three Wise Men may have actually been more than three and most likely did not appear until Jesus was a year or two old.  I know all of that.

So why did God allow his Church to choose a time of the year once celebrated by pagans?

Because He knew that Humanity needed to celebrate the Light of His coming in the midst of cold and dark days (unless you live in Australia).  And anyway, why wouldn't Christ want to trump a false God?  For now... even if the world does not worship Christ as Savior and Lord... they are well aware of His Day.

So this week remember, what you choose to do this Christmas season will be reflected in the memory of your children, your grandchildren, your family, your friends.  So if you are less than joyful, shake it off and put on Christmas music and set up the tree and bake some sugar cookies and show to someone in this world that the first advent of Jesus coming is worth celebrating.  Regardless.

Posted by Brenda@CoffeeTeaBooks at 10:46 AM

I really really needed to hear this today. The past few years have been tough but they have also been good. Your reminder to make memories is appreciated as memories truly are what makes Christmas special.

John says that you brought back a memory...he's a bit misty-eyed. Brenda, you can say a thing so beautifully. This was just what we needed this first Sunday of Advent. Enough of Ferguson and joy-sucking situations, let us remember The One Who changes us and makes this life worth the living. 22

Such a beautiful post to wrap up the Thanksgiving weekend and start Advent. My hometown of my childhood is Northport, NY. Although I don't live there any more, I still remember Main Street decorated for Christmas. The 5 & 10, the penny candy store, the hardware store, and all the stores all the way down to the dock and the harbor were all dressed up for the season. Thanks for the reminder to make these days the best ever. Nancy

If I may be so bold as to say so, I can really tell the difference by your posts in how you feel this holiday season, Brenda, compared to recent past years. Very happy for you! And we are reaping many blessings by reading your shared wisdom. I have fond memories of going to a tea room "downtown" with my mother, also. Have a peace-filled week! Bess

A great post to begin the season of Advent. I love the reminder that we need to fill our children's lives with good memories to sustain them when the difficult days come...as they always do. Now I will try to do that for my grandchildren.

The LIGHT of the world in a season (both physical and spiritually in our nation) of darkness!

I remember Woolworths in downtown Columbus where my grandma use to work because she would bring me home candy from there. And of course JC Pennys was right across the street.

A lovely post again, Brenda and such true words...to create happy memories for our children which I tried to do as my children were growing up. We have never been caught up in the commercialism of Christmas. You know sometimes I think it would be nice to have a white Christmas instead of a heatwave here in Australia :-)

AMEN!! You said it so well! Thank-You!!
Blessings of the Season,
Laura C. (WA)

One of my favorite memories was the florist shop in an old 2-story house. They had a Santa's workshop with moving elves working - huge trees with lights all the way to the top. It was magical! And the old courthouse was decked from ground to second story roof.

Good memories are really one of God's gifts to us! Precious. Pam (SD)