Sunday Afternoon Tea - For Such a Time as This 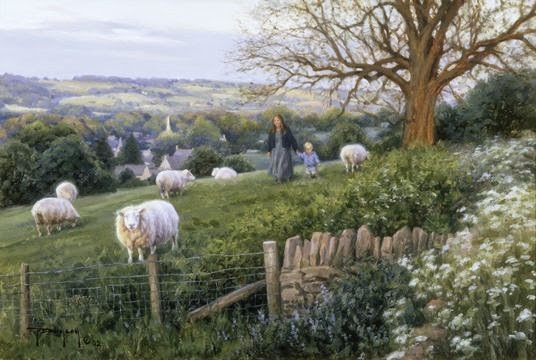 "Yet who knows whether you have come to
the kingdom for such a time as this?”
Esther 4:14 NKJV

" From one man he made all the nations,
that they should inhabit the whole earth;
and he marked out their appointed times
in history and the boundaries of their lands."
Acts 17:26 NIV

"And He made from one [common origin, one source, one blood] all nations of men to settle on the face of the earth, having definitely determined [their] allotted periods of time and the fixed boundaries of their habitation (their settlements, lands, and abodes)..."
Acts 17:26 Amplified

I hear over and over again these days, the worry felt by parents and grandparents about the world in which their children are inheriting.  Not to mention our personal concerns and apprehensions about the state of the planet in which we live.

Although I must admit, while one cannot help feeling unsettled at times, I don't actually worry about my family.  When both of my kids were growing up, I would mention to them often that they were the Esthers and Daniels of their generation.

I can still remember the first time the above scripture in Acts got through to me.  I was at least forty and wondered where it had been all my life.  I'm including both the NIV and the Amplified versions of that Bible verse, I feel it is so important for us to know and hold onto.  What does it tell us?

We are born at the time in History and at the Place where He intended us since before the world began!!!  (Granted, He may also move us around occasionally.)

My friends, if we ask Him that His will be prevalent in our lives and those that we care for... it may look dark and threatening but we are right where He wants to use us for His will and His GLORY.

This is where He wants you to be His spokesperson and His hands to help and His strength to those who are weak.  This is your time!  That for which you were born!

You see your son as that little boy.  God sees him with the sword of the Word of God, a warrior knight to battle the darkness.  The little girl?  Brave and wise and not unlike the women of the Word in their time... standing strong.

I love to read about the women and men of the Word.  I look forward to meeting them in Eternity.  Especially Esther, who like most of us... didn't really want to be a heroine.  But came to realize that indeed, God did place her in the very place she needed to be "for such a time as this".

While I believe this generation in which we live faces obstacles few have known before, that does not change the fear in which past generations felt with what circumstances were surrounding them in their own age.

Imagine being a Jew in Germany or Poland in the months leading up to WWII.  Imagine living in London during the Blitz.  Imagine seeing the Vikings landing to conquer (I married a man of Norwegian decent... they are still proud of their Viking blood!).

I have a biography of Grace Livingston Hill, where she is coming to the end of her life and is actually glad it is time to go to "be with the Lord".  For she felt the world was becoming so decadent, she was concerned for the generation coming after her.  She died the same year my husband (now retired) was born.

I grew up under the shadow of the Cold War and like most in my generation, kind of assumed we would be obliterated by an atomic bomb.  Young people today, those born after the Reagan presidency, may laugh at the idea.  But that shadow was always, always there.

Some will know the story behind the beautiful Gaither song, Because He Lives.  Gloria was very concerned that she was expecting another baby because she felt the world was falling apart.  After spending a lot of time in prayer, God assured her this child was born at just the right time and the words to that song came to her.  This was in the 1960s.

I'm not saying we will not fear as we hear of wars, rumors of wars, plagues, terror, etc.  It is only human to feel such emotions.  And unless you are a Vulcan who has managed to totally subvert their feelings (only fellow Trekkies will understand)... you cannot help but be assaulted by them.

However, you don't have to live with them.  As you come before the Lord in prayer, as you read His Word (even if you can only park in the Psalms!), as you go about the daily tasks He has put before you... you will know.  Deep within... in that place of your soul where Truth abides... you will know.

He either has you where He wants you or He is moving you into that place.  You were born for such a time as this.

You may be young and have the strength of a warrior.  You may be older and pray like a warrior.   It doesn't matter as long as you are still in the battle.

When does the war end?  The last Book of the Bible tells us it ends when the King returns and you know what?

He returns the Victor.

Oh this is such an important post. The last couple of lines brought me to tears. It is always good to hear. I used to wonder,,,and marvel, when I was a young girl about the fact that I was placed by God to live in the U.S.A,,in the middle of the country, and to grow up in a small town. I wondered how my life would have been different if God had placed me in another city, or even in another country. Would I have known Jesus? How blessed we are to be in this place, in this time! Thank you Brenda, again, for such a thoughtful "sunday tea".

It is so true what you say; living "here and now" means also give the best to the people who have not come yet. They too deserve a wonderful "here and now". I don't know what is about where you live, but here, I mean in Europe, people keeps talking about globalisation, I think we should also learn to talk about "timelisation" if this word would exist... My life does not end with me, but it affects others in the future. The way you have touched and love your children, will touch all the people they'll meet in their lives. The way Jesus has touched his apostles has touched us today :-)
Thank you for your words Brenda!!

What a great post! Thank you for the reminder- I think we all need to hear it from time to time!!
God bless~ Lisa :O)

Wow, right on! Excellent!! Great encouragement, too, as I've been praying that I be in th center of His perfect will.

I so love this post, and these thoughts. It is so true. He does nothing by mistake, and has placed us where He would like us.


Your blog posts always inspire me. Thanks for this powerful reminder that the victory has already been won. When I am fearful, I try to remember that "The Lord has not given us the spirit of fear..."

Just what I needed to hear .! Thank you .

As some used to say to me when I lived in NC: "I hears ya, I hears ya!" My cousin visiting and I were talking today of our children who are not following GOD presently...and I remarked to her that it occurred to me that perhaps our families were to reap in a way we did not want nor ask for. That maybe we were here for our in-law children and families who do not know of GOD truly...that maybe if we can love them enough that one day they too will follow our Eternal FATHER!! She agreed...that perhaps we have this mission for our lives.

What a wonderful post! I wish I could share this whole column with others. Thank our Lord that He is in control and he does all things well. I am thankful to be living in this time and this place. Blessing to you, Brenda. Sharon D.

I'am so thankful to have inspiring
women, like you, who are spirit filled by God to write such encouraging posts. It was much needed in my life today! Thank you
for writing and your uplifting blog.
God Bless.
Paula

Your Sunday Afternoon Tea posts are always insightful and enjoyable and encouraging. This one was all that and more. Thank you for the wisdom you have gleaned and are willing to share with us.

It's been a long time since I commented here.
I'm glad I read this post , THANK YOU.

You do know the Madeleine L'Engle poem, The Risk of Birth? It fits well with your thoughtful, convicting post.