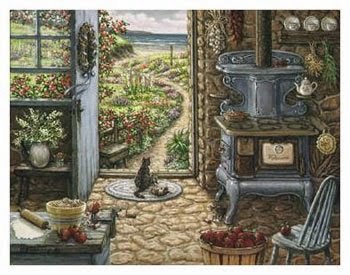 "...And driving down the road I get a feeling
that I should have been home yesterday, yesterday.
Country roads, take me home to the place I belong..."
John Denver

Trust in the Lord with all your heart
and lean not on your own understanding;
in all your ways submit to him,
and he will make your paths straight.*
God

When I started writing Sunday Afternoon Tea posts well over seven years ago, I was hesitant to commit to a weekly post about current ponderings.  I mean, really... who can think of something each week?  But I have found it quite amazing at the way God speaks each week and how I receive inspiration.

I think it has something with the strange way my brain is wired up.  I do find God in peculiar circumstances and those thoughts become these weekly ponderings.  For instance, this past week I was driving into town on the country road I take when wanting to meet up with the highway.  There were few cars on the road that day but coming toward me, in the other lane, was a very large semi truck!

For a moment, the thought came to me... "I wonder if he is lost or does he know this road is a shortcut to the highway?".

Now, as an aside, there are a couple instances when one does not want to be lost on country roads.  One is after a major snowstorm when the roads and the fields look one and the same.  The other is when the corn is fully grown and you find yourself in a corn maze of county highways.

That just happened to me in August when the sweet corn was ready for harvest.  I had to stop by campus on my way to my friend's house, who by the way lives in town.  Remember that for it is important.  So I decided upon leaving campus to take a highway I rarely use.  Which would have helped me arrive quickly if I had not taken the wrong turn.

There came a time I called my friend to tell her I would be late.  She asked where I was.  I told her I had not a clue but according to the compass on the dashboard, I was headed not towards town... but away from it.

Come to think of it, with a full tank of gas I could have reached Peoria. I am not familiar with that part of the county in the best of times but with the corn crop so high, I was very very very lost.

When I finally stopped at a house and asked directions, I was told if I went to that stop sign down the road and turn left, I'd eventually end up in town.  I did as he said and after awhile, began to see some familiar landmarks.

All that to say, country roads can get you lost if you don't know where you are going.

What came to my mind that day when I drove past the semi was how many times I thought I was lost when in fact, God had me exactly on the road He intended all along.

My life was in a maze, not unlike those cut into the corn at various Harvest festivals.  I felt I had gone through this path once before!  Wasn't that the same landscape I passed half an hour ago?  Certainly I have taken a wrong turn in my life or none of these circumstances would be occurring.

I was pondering this yesterday while doing dishes and inhaling the aroma of lemon verbena dish soap.  It struck me that two of the most unhappy times of life... those which bring great pain just thinking of them... occurred after a major success.

Like that truck, I was heading full speed on the road of life and feeling quite confident about it all.  But then the scenery began to look unfamiliar and the storm clouds began swirling and the road which had been straight now contained dangerous hair pin curves.

The thought occurred to me more than once that I was not getting out of these circumstances alive!  I held on to Him for dear life, begging for an explanation.  How could a Heavenly Father who says He loves me allow this to happen?

I would immerse myself in the Psalms and like David, whine and complain and point fingers.  My enemies are overwhelming me!  My life is being drained away!  Why, just yesterday all was well and now there is complete and utter failure.

But as I washed dishes and my thoughts were reflecting on those painful paths... looking backward after the road once again became straight and the storm clouds disappeared... there had been no wrong turn at all.

It was during those weeks and months and sometimes years when the road was not straight and the path not clear ahead that He was molding and shaping me in such a way He could use me after that next turn was taken.

For we don't grow very much when the road is straight and the sun is shining.  When we drive the same road every day, we tend to not give it much thought unless a deer runs out of the forest and we must brake quickly.

But when we drive that road at night.... especially when traveling through the forest... and it is dark... and the rain is pounding... we give our entire attention to the journey.  And we pray.  A lot.  And we call those who love us and ask them to pray so we arrive safely home.

That is what He is doing when we find ourselves lost on life's journey.  When we feel we are surrounded by high corn stocks and we can't see over the top to tell where we are.  When the way is dark and the path has unexpected sharp bends in the road and we wonder if we will ever get out of this particular trial alive.

During those times, He often has shown me areas I need to grow to be more Christ like.  Sometimes there has been a character flaw which needed ironing out a bit or an area where I needed to grow.  There have even been instances where He was just preparing me to be able to empathize with one who needed a friend later on the road.

Sometimes I never completely figured out the whys or wherefores and He told me to stop stomping my feet and holding my breath and just get over it.  For He is infinite and all knowing and I am not.

There comes a day, sometimes suddenly but most often a little at a time... when the sun begins to shine and we understand just a little.  Perhaps never to fully understand the path He led us on this side of Eternity.

But we know we have been changed.  We've been clinging to the Source of life and His wisdom has been flowing through us so we could not only survive but come out of it stronger.

And yes... all of these ponderings began when I met up with that semi truck near the pond and not far from where I turn off the road if going to Mr. & Mrs. Christopher's house.  Thoughts which continued while washing dishes and sweeping the floor and petting a Maine Coone's long fur.

Musings to share with you once again on a Sunday Afternoon.

Once again I'm fascinated by the way your mind works and your innate ability to put it down in words. And I find great truths in your ponderings. Keep them coming; tough times are ahead and we need all the inspiration we can get. Blessings on you and your family.

What an encouraging post! Thanks so much for the reminder that God is in control - even when I may not feel like I am on the right road. God bless~ Lisa :O)

Thank you so much for this very encouraging post!

Brenda, once again, you have created a masterpiece of words! Thank you for that. All of us have taken a "wrong turn" on life's country roads and felt lost. Thanks for the reminder that God does provide a way out.

I agree with the other comments. I don't know how you do it week after week--come up with such inspiring words (except the Father gives them to you. It is His gift to you).
Thank you for being a willing recipient and "passer-on" of that gift. Blessings, Sharon D.

Beautiful, thank you for sharing.

Thank you for this post .. validating and encouraging. I love hoe God uses you to touch the hearts of other ladies.