The Inspiration of Tasha Tudor 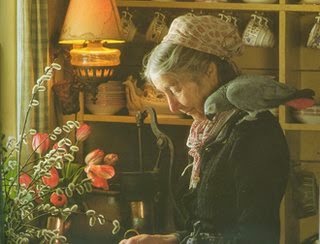 I have different categories of heroes.  Most would be located under the file folder labeled... Faith.  A few heroes may be found if researching... Art.  There are some writers whose skills take my breath away.  Still others are those whose gardening and homesteading and cooking and needlework skills amaze me.

But there is one woman whose inspiration stands out in the category of... Lifestyle.  That is Tasha Tudor.

Albeit not a woman of faith.  If truth be told, she could come off as a tad strange at times if one were to only look at her ummm... religious (if it could be called that) philosophy.

But Tasha was a genius at creating the world in which she wanted to live.  As she illustrated this world, the rest of us would feel as we could step into it from time to time.  What did her world bring us?  A feeling of Peace perhaps.  And Beauty.  And that longing we so often feel for another Time and another Place.

Tasha gave us permission to surround ourselves with those things which cause our heart to sing.  Not many went to the extent she did and neither could they.  But we can pick here and choose there and find a way to capture what we find Beautiful in our days.

I realize if a young decorator were to walk into my Study, she would most likely think "out of date" and "eclectic" in a not-so-chic way.  But that is okay.  For I think should she stay long enough, she would sit for awhile in the overstuffed chair and listen to the Andrew Peterson Channel on Pandora and perhaps have a cat come over to say hello... and find peace.

Tasha showed us it is just fine to love the old things.  In the midst of iPads and iPhones and laptops and 24 hour news and satellite TV... we can unplug.  We should unplug from time to time.

Tasha reminded us to try the old recipes and the ancient skills of making our own (anything) and that one could transfer their own Place into what they love.  And sometimes all we need is to see one other person on the planet understands when we say perhaps we were meant for another age, such as the way I could move to Colonial Williamsburg.

Happy Birthday, Tasha.  One who created Beauty in her own little parcel of the planet.

Photo: Tasha Tudor at Home: photographer Richard Brown
Posted by Brenda@CoffeeTeaBooks at 11:57 AM

Nice post. Yes her lifestyle reminded us of the good things that no longer exist for so many of us. I admire those that try to keep up the crafts. It's hard work but I imagine so rewarding. I think it was love for her.

I agree! Tasha was her own person, and chose the live she wanted to live. I admire that. Her life showed us that we could do that too. That we don't have to keep up with modern times in all things. We can pick and choose.

Wonderfully realistic tribute to Tasha Tudor; one of my favorite authors, illustrators, and gardeners. I had the utmost pleasure of meeting her once - a surprise trip from my husband. Bliss.

Sooooooo interesting :) I just returned from a thrift store I visited while my husband was doing hospital visitation. I found (and purchased) The Tasha Tudor Christmas Book TAKE JOY for $1. I was very excited! It was published in 1966 - the year that I graduated in.

I just adore her illustrations and love her cook book. Sometimes I go on Tasha binges from our library! :) I love giving her 1 is One for 1st birthdays as a gift. Our copy of Secret Garden and A Child's Garden of Verses are illustrated by her! :)

My mother in law was an artist and she loved Tasha Tudor. The woman is interesting in that she was so confident in her own world. I would not want to live so much in the past, but she did make it look inviting.

Hi Brenda;
Oh goodness, Happy Birthday to Tasha! How I love her books, especially about her crafts and her cooking. And her gardening, and her doll houses. I guess I just love everything about her. Thanks for the post, it says excally how I feel. Have a great evening. Love and Hugs, Nana

Perfect. A heroine of Lifestyle. Love it!

Brenda-
I always think of her as such an inspiration of how a woman can use her creativity and what she has at hand to "Keep the wolves away from the door" as she put it.