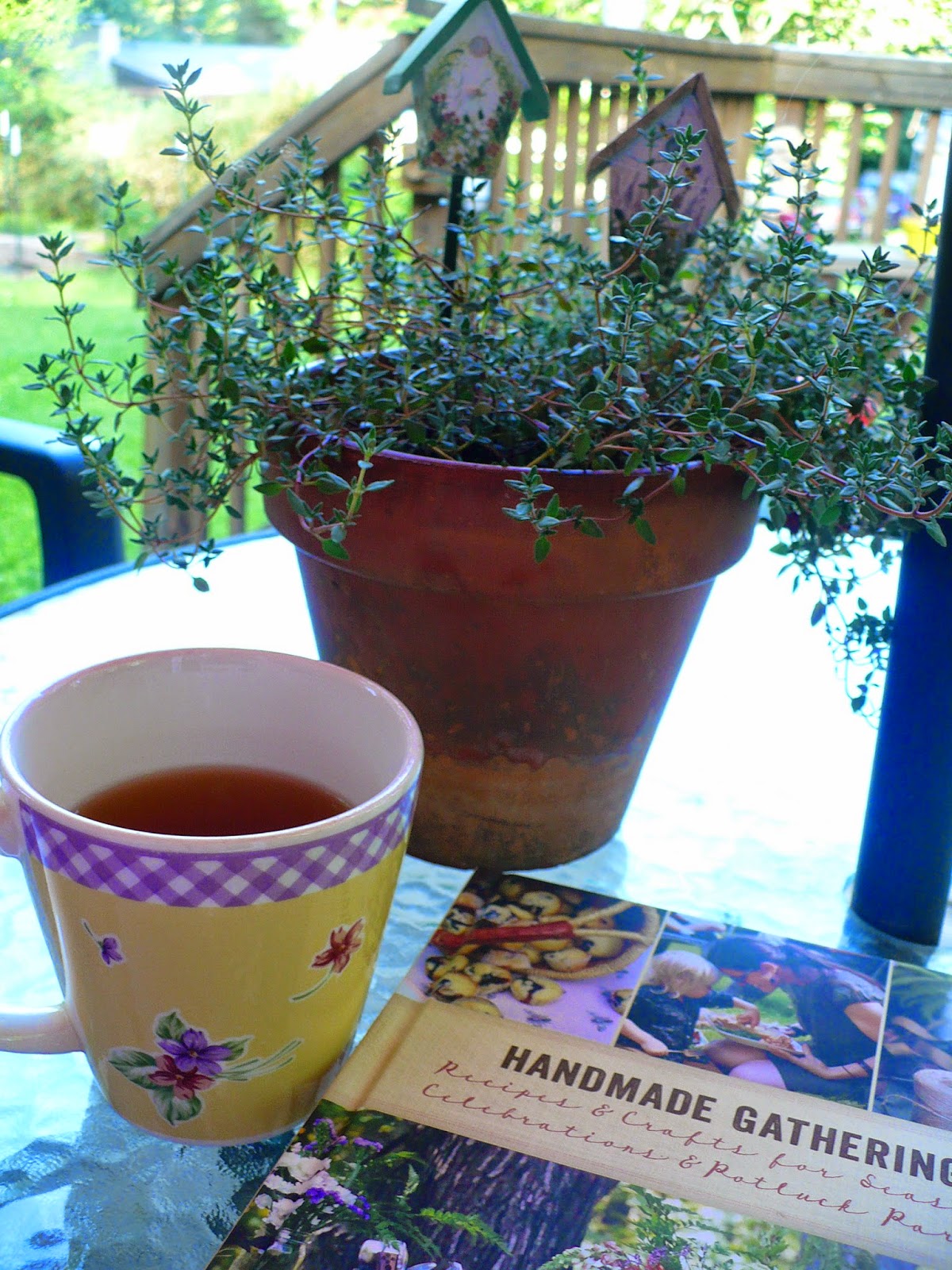 "This is what I do:  I close my laptop, and I go the kitchen, the place that repairs me, that allows my mind to loosen, and my heart to soften, the place where smells and sounds and flavors replace ideas and deadlines and tasks.

The first step, always:  Set out the knife and the cutting board...  I pull the ingredients... Onions from the bowl on the counter, olive oil and vinegar from the basket near the stove... A swirl of oil into a pan, and while it begins to shimmer and thin, a quick rough chop of an onion, the first step of almost anything."
Shauna Niequist

The above quote is from a small e-book titled Crave: A Christian Longing for Food and Community*  which contains essays about food from a few people.  The essay is called Prayers at the Cutting Board.  I knew I'd like Shauna's essay before reading it as her book Bread and Wine**  is one of my all time favorite nonfiction books.

But when I read this essay and these words in particular, it sparked something within myself.  A memory of sorts but even more than that... a lovely habit.  For I cannot tell you how many of my meals begin with these same actions... the choosing of an onion from a bowl, pulling the stainless steel French chef's knife out of it's home on the wooden knife block, placing it on the same wooden cutting board I've had since Stephanie was a baby... and the usual slicing and chopping that I can pretty much do while talking to my husband or listening to a radio program.

Some women are born to sew.  Some born to knit.  Others can weave lovely rugs and shawls and wall hangings.  But the women of my family were born with the cooking gene.  We tended to be foodies before the term was made popular.  For God made us to be in such a way that we are artists whose tools are Chef's knives, skillets, and mixers.

When I think of my mother, I remember certain dishes that only she made well even though as a full time working mom, I doubt she considered cooking relaxing.  But when we knew fried chicken was being served as the main dish along with cooked-to-death green beans as a veggie and banana pudding for dessert... there was a rush to the table.

I am pleased to say I inherited the Kentucky gene of making great fried chicken, as did my daughter, and I highly suspect Miss Elisabeth has the same gene.  This being the granddaughter who attended a French cooking summer camp at the age of... nine?   The granddaughter who asks for cookbooks for her birthday and Christmas.

Yes, this culinary gene has been passed on to at least one child in that generation and possibly more.  Although I suspect Faith is more of a gardener unless she becomes a woman of many talents.

But I digress... there is a difference between one who cooks and one who loves to cook.  Just as I cannot find relaxation in sewing but I can make a quilt, there are those who cook three meals a day and never learn to love cooking.

When I have enough Amazon credit and there is no birthday gift needed soon, I buy a cookbook.  Or at least a book relating to cooking and hospitality.  When I am not feeling the best, I turn on the TV to see if there are any cooking shows on at the moment... the kind I like which are not glitzy and glamorous but bring us in to the cook's love of all thing culinary.

When I worked long hours and my daughter was a preschooler, our Saturdays in summer often included the three of us enjoying breakfast "out" in Saugatuck, Michigan.  After breakfast we would walk along the Boardwalk near the water and then stop by the gourmet kitchen shop.

If it is possible for me to love any shops more than a bookstore, this would be it.  For this was the decade cooking as an art was just beginning to become popular and seen as something other than an absolute necessity, so such shops were opening in many areas with wonderful cookbooks, kitchen gadgets, fine knives and pots and pans, etc.

There were PBS programs by Julia, Jacques, and others as well as glossy magazines such as Bon Appetit to which I subscribed.  Perhaps my daughter not only inherited the culinary gene but also absorbed the art of cooking during this time.  Which would explain why she is even a more creative cook than I am.

But I think part of it is just the way God made us.  The women in my maternal line are creative cooks.  Other women can look back at a mother, grandmother, great grandmother... and recognize the same talent for exquisite needlework that she inherited.  Still others can draw and paint and sculpt and create the loveliest of gardens.

All gifts are part of the art of making a home which has been downplayed in today's society.  Skills that many no longer consider works of creativity.  Why should one begin a meal by chopping an onion when one can throw "something" in the microwave to settle their hunger?  Why should one cut out pieces of fabric to sew it back together again into squares and rectangles when one can purchase a blanket cheaper at Target?

It is the same reason that paragraph from an essay in a book brought a smile to my face.  She gets it... I get it... I hope you do, too.  True cooking satisfies more than physical hunger.  Especially when one cares enough to have designed their days to make room for such time in the kitchen.

I think that is why my favorite "mentor" was Edith Schaeffer.  She used all of her God-given talents to minister at L'Abri.  Not only cooking but sewing and writing and gardening and listening and giving counsel to those who needed it.  I have read many articles and books by people who were at L'Abri who said Edith was the soul of that ministry and without her home-making skills, it would never have worked as it did.

We all have some skill that can be used in making a home.  Even if you live by yourself and invite friends over from time to time.

For you, it may be better to have a repertoire of simple recipes as you do not enjoy being in the kitchen.  But you love to create and find peace in front of a sewing machine instead of a stove.  You may prefer to spend extra time in the garden growing food or standing beside a river fishing for food.

Or perhaps you love getting away on weekends to cook hot dogs over an open fire with the family or pack up sandwiches to participate in sports events as your family would rather run and jump and play than eat!  They see food as a means to an end so they can... move!

The Word says we are "fearfully and wonderfully made" and I would add... uniquely made.  He has given us every skill we need for our journey and with those skills the desire to use them.

So don't be angry at yourself if you never seem to be able to decorate cupcakes perfectly (I baked cupcakes for my son's wedding but left the exquisite decorating to my daughter) or your husband ends up sending the long neglected mending to a seamstress.  Which may or may not have happened in this home a few times.  ;)

Instead, when you walk with the Lord and spend time with Him... you begin to realize just how you were fearfully and wonderfully made.  Take joy in your gifts and find peace in using them.  As for me... it often begins with chopping an onion.

I am glad you stress the idea of home-making as an art, something to be refined and honed. Different women have different skills to offer their families. I can't sew a dress or shirt, but I take great satisfaction in cooking and serving up hospitality for my loved ones, and guests.

I loved Edith S. also and raised my daughter reading her books. It is lovely when we use our gifts at home and abroad to bless others.

Nice article, Brenda...good points made. I enjoy cooking a lot of times...tho with age and my gimpy leg, and I must not forget DIABETES, sometimes it is not so fun. But I do think for some reason, what is cooked at home tastes better most all the time, over what we buy even in restaurants. People should take a bit more pride in doing a good job these days...with all the instructions easily available, seems it should taste better. I also like to dabble...in quilting, sewing, crosstitch, crochet...dabble being the word. HA! My fix-it stack of mending is getting too high!! I also love to surf the internet and gather new ideas. I need to get back into DOING more now...and then here we live within walking distance in Puget Sound of the ferry and inland waters...too many interesting things to do I guess. Thanks for the encouragement...
Elizabeth in Wa

The reviews on those books are stellar. I'm sure that I would enjoy them. Oh I have no idea what God has in mind for me...I just love to read blogs. =D

As the mother of a large family, a lot of times I cook just because we have to eat. That said, I have told my children that a great help for depression is to heat some olive oil in a pan and toss in some crushed garlic and a little onion. That smell (which starts many of my dishes) will make you feel better every time:)

I am lucky that I enjoy cooking and gardening and many other things. I still struggle with housekeeping! But I do it, and I get help when I must. A good post, Brenda, like all of yours.

Hi Brenda
What a wonderful post! I love to be home doing things, whether it is gardening, crafting, or games on the computer (yes, I am addicted, it is a great stress reliever for me.) Everyday cooking does not interest me, altho I do it everyday. But cooking for guests coming, now that is a joy to me! Thanks for a great post, Love and Hugs, Nana

I could wish that more young families saw meal preparation as a creative time for learning how to cook as well as opportunity for appreciation of the 'real' ingredients that become a meal fit to nourish both body and soul.